I’ve captured so many great knockout shots over the course of my career, it’s very difficult to narrow it down to a small selection of my favorites. Sometimes, it’s a stunning upset.

Sometimes it’s the exact result everyone expects. And sometimes, the shot just doesn’t look good because of a bad angle, referee blocking, or just bad timing. This is the shortest list I could come up with for my favorite knockouts that I’ve photographed.

Under a minute into the fight, as Eastman shot for a takedown, Belfort clinches the back of his head and unloads a knee that opens a massive cut above Eastman’s eye. Eastman falls to his back and Belfort puts him away with a barrage of punches. 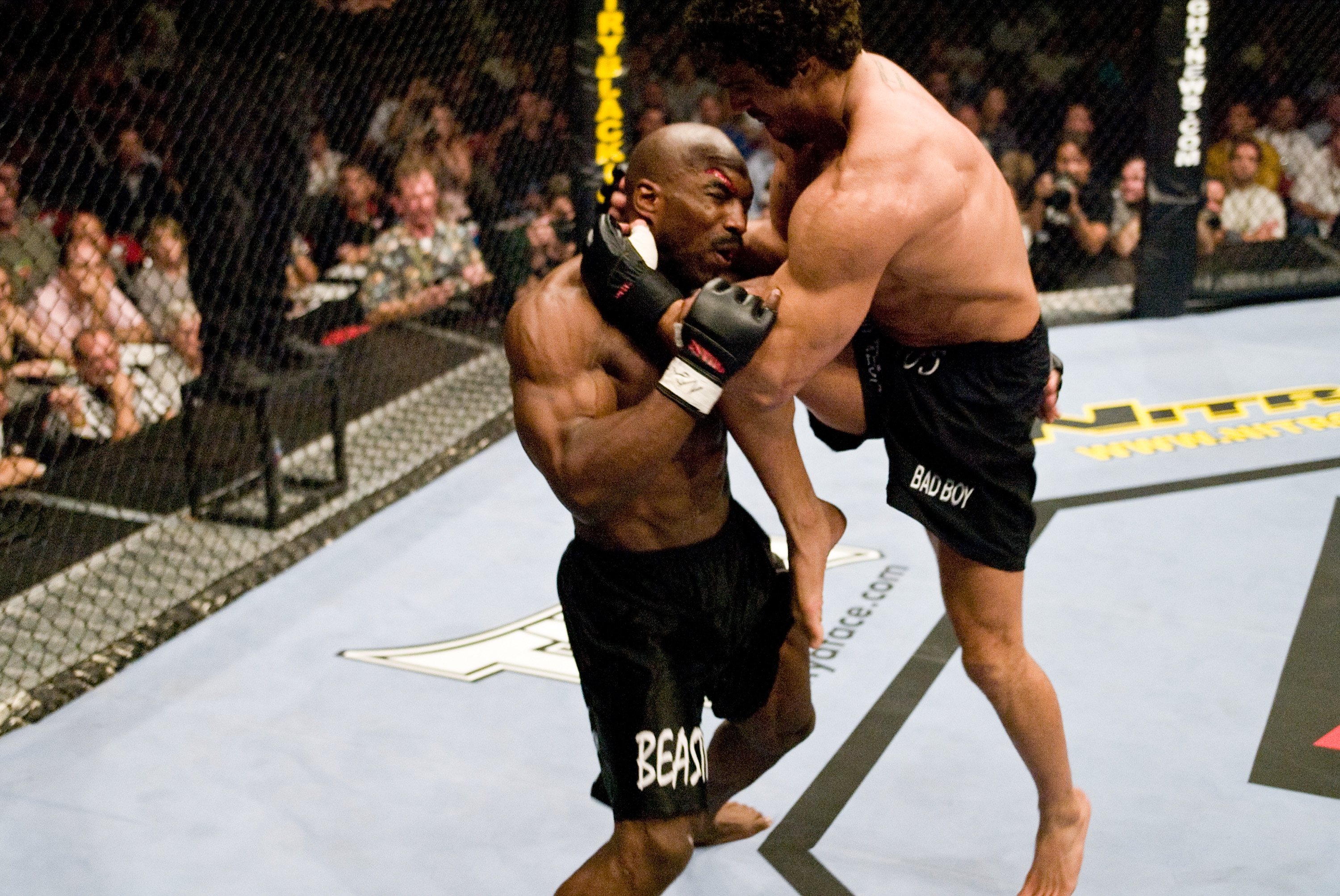 Following their appearance on the inaugural season of The Ultimate Fighter as opposing coaches, Chuck Liddell captured the UFC light heavyweight championship with a stunning knockout just two minutes into round one. 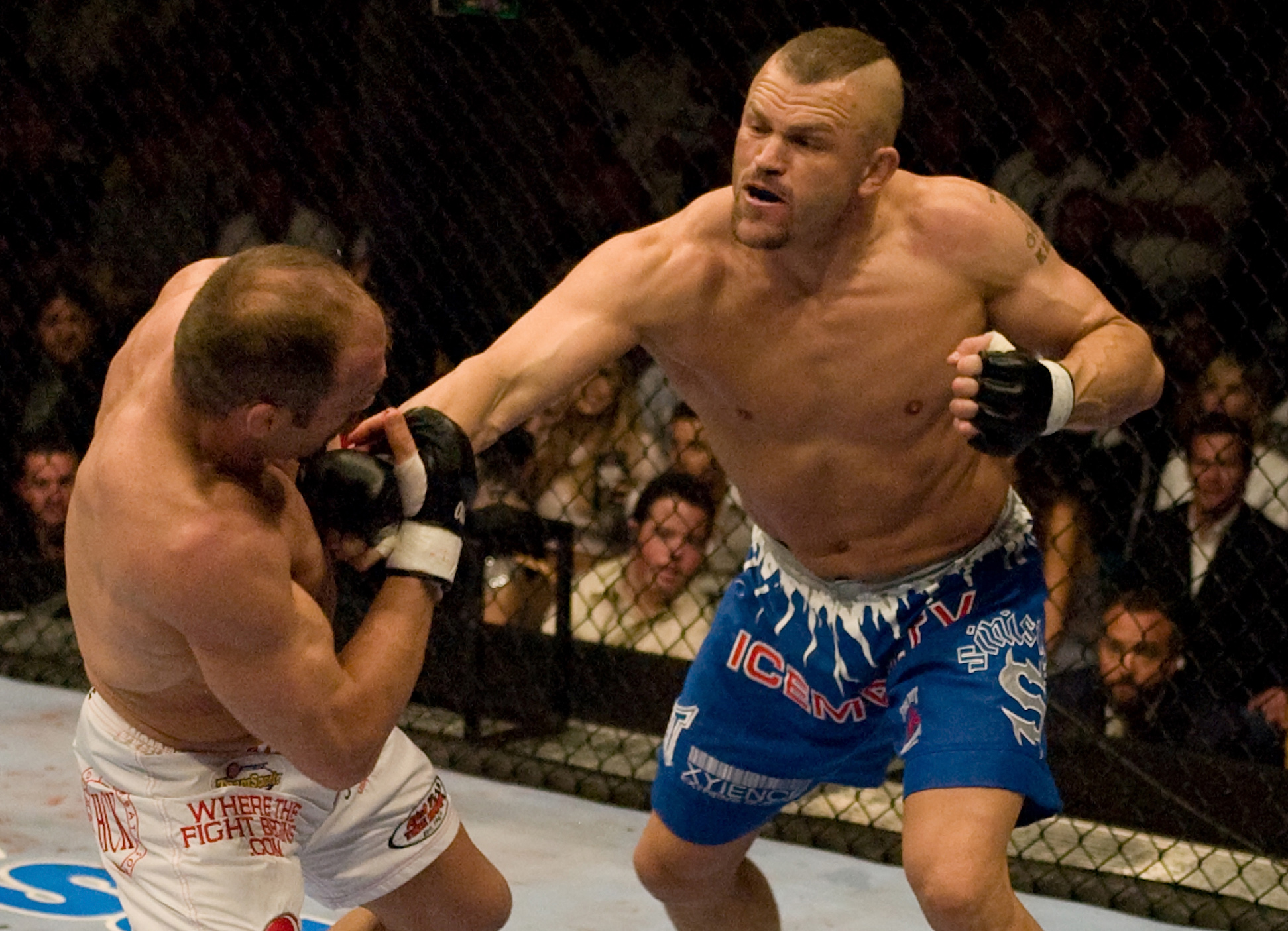 One of the greatest highlight real knockouts as Franklin landed a straight left that sent Quarry to the canvas stiff just over two minutes into round one. 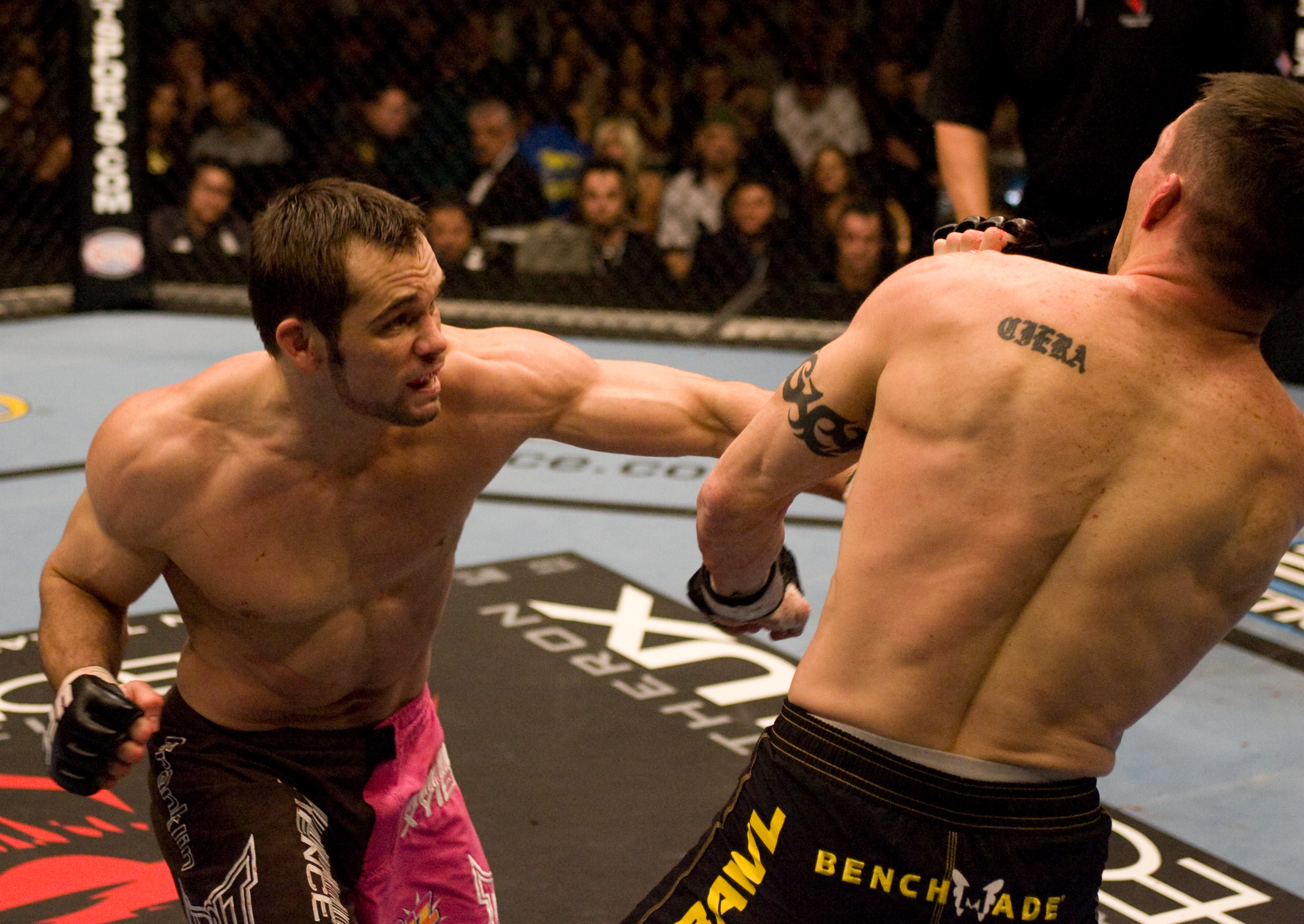 Mirko Cro Cop, known for his head kick knockouts throughout his kickboxing and MMA career, was on the receiving end of a brutal head kick knockout in the first round against Gabriel Gonzaga. I didn’t notice right away how Cro Cop’s knee was twisted backwards. Fortunately, there was no lasting damage to that knee from the way he fell. 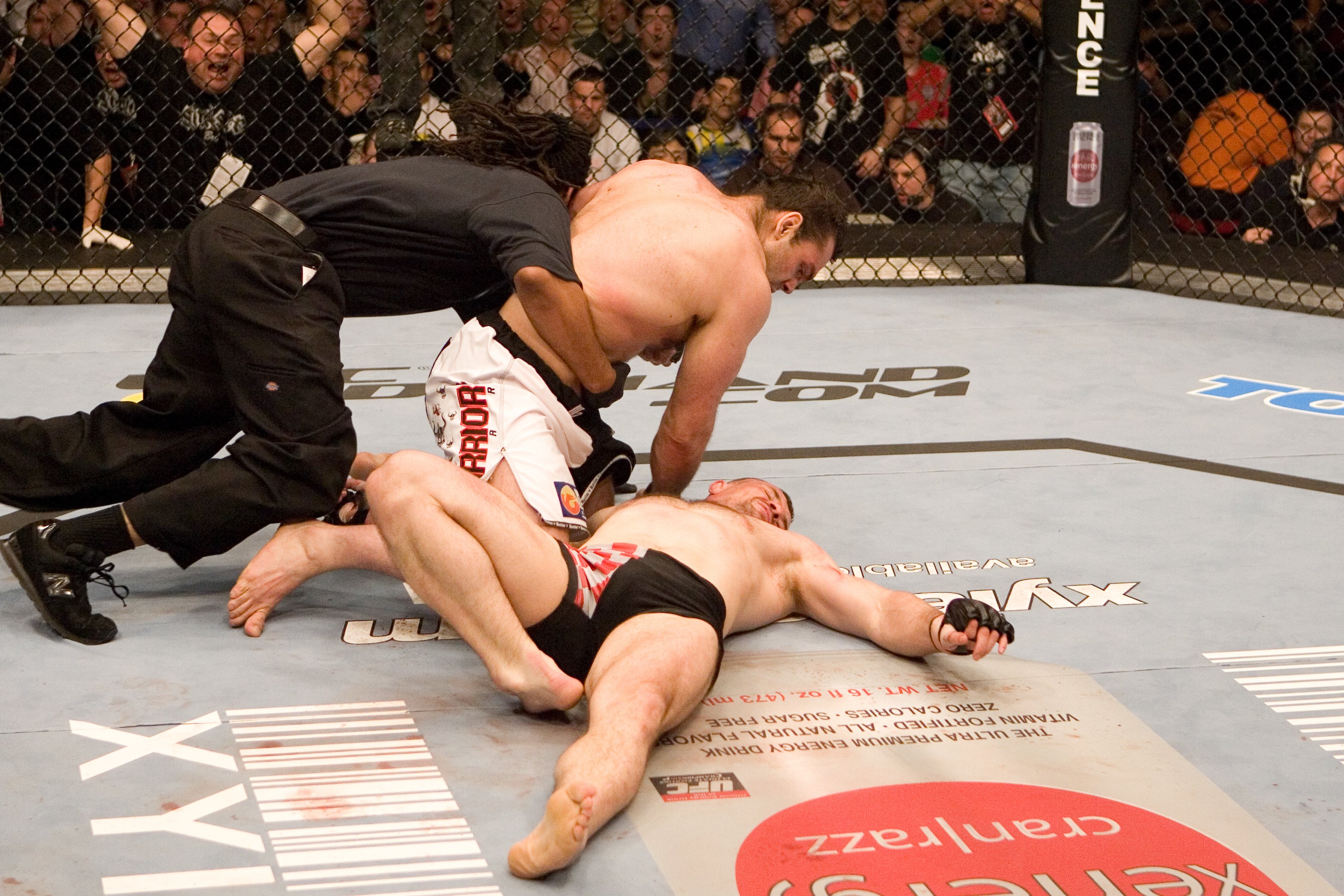 In his second UFC appearance, Rampage snatched the UFC light heavyweight title from Chuck Liddlell with a brutal knockout in under two minutes. This was one of the cleanest landed hooks I think I’ve ever seen in MMA. 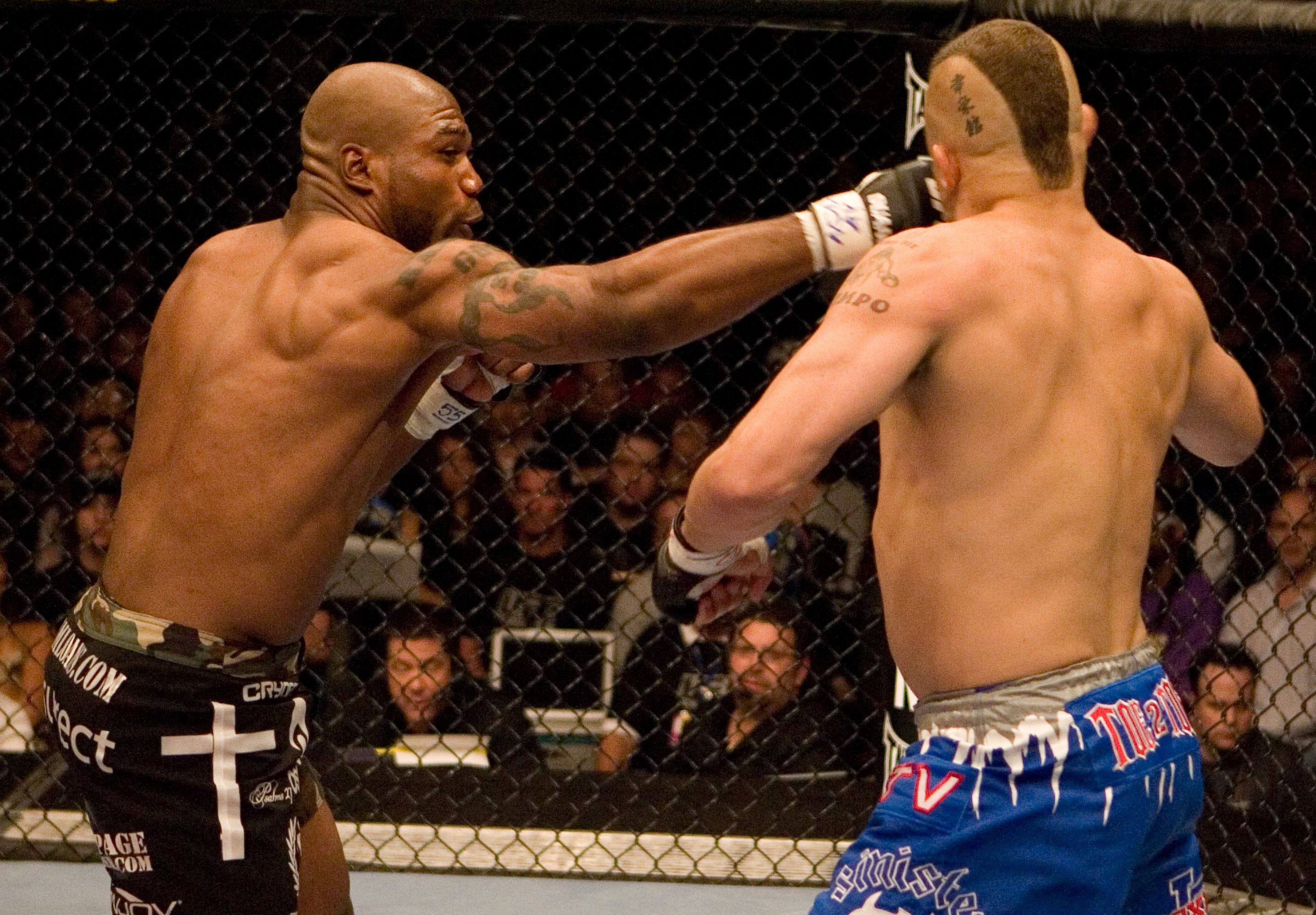 Evans faked pawed a jab and then countered a Liddell uppercut with an overhand right that sent Liddell to the canvas immediately. This shot is actually from the follow-up left hook that narrowly missed as Liddell crumbled. I always loved the intensity on Rashad’s face in this frame. 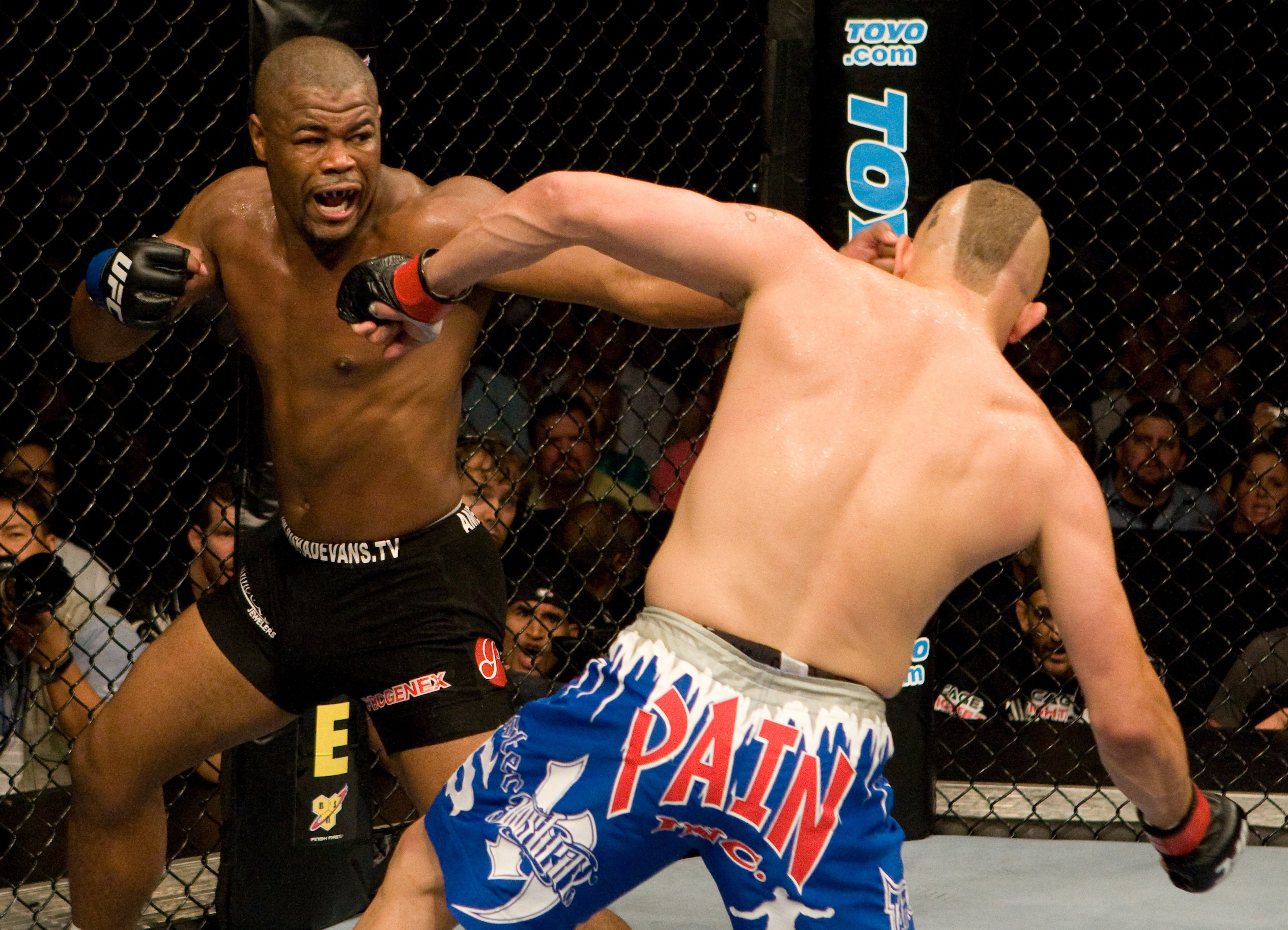 This knockout has been featured in numerous highlight reels, as well. Very early in Dos Anjos’ UFC career. Stephens very often winds up and puts every ounce of strength he has into his punches. That was exactly the case here as he wound up and lunged in with an uppercut that turned out the lights. 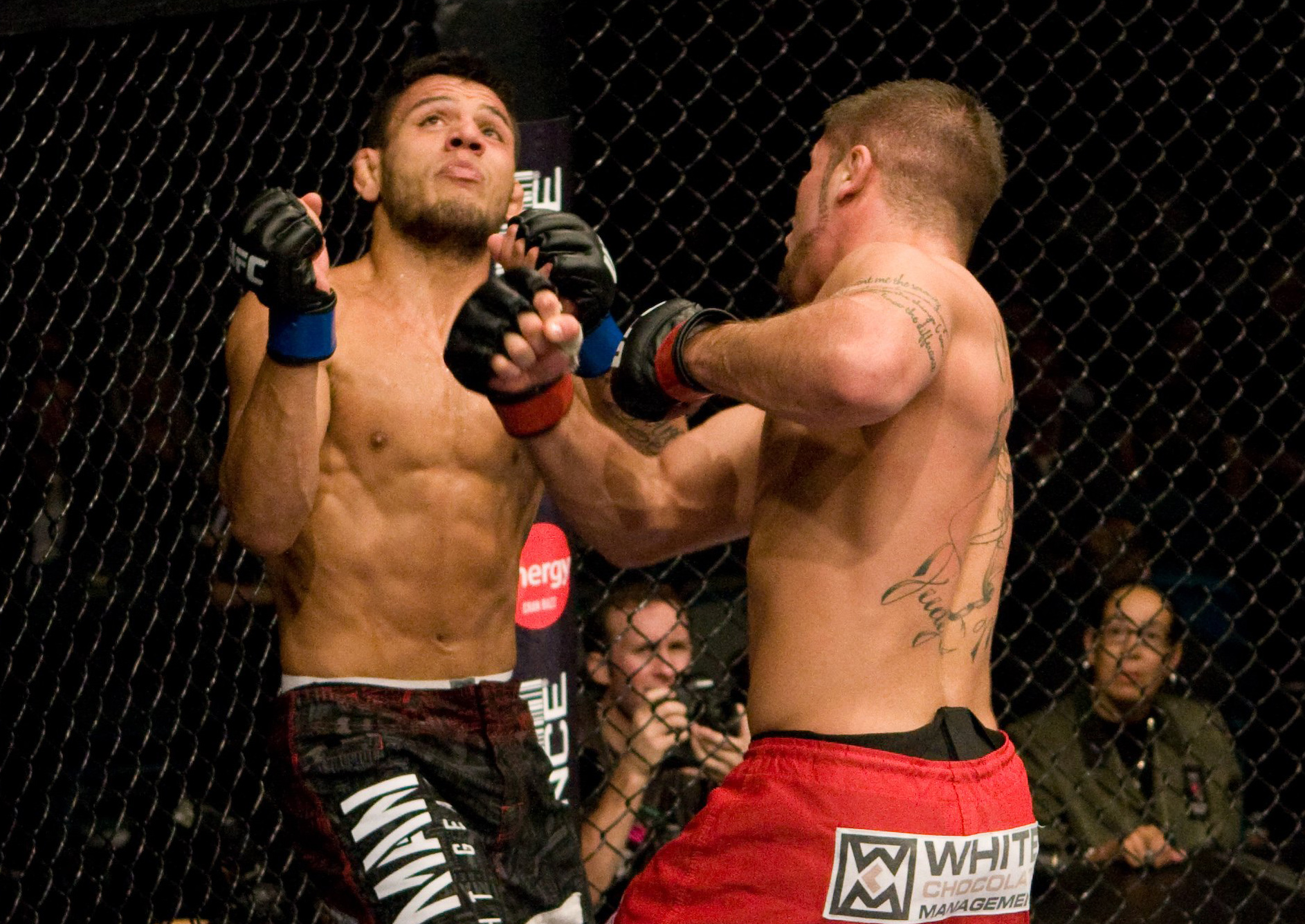 Perhaps the birth of the “H-Bomb”. Bisping talked so much trash on The Ultimate Fighter and leading up to the fight. The follow up shot on the ground is what most people remember, but my view was obstructed by the referee. I didn’t even see the shot until I looked up and saw the replay on the screen. 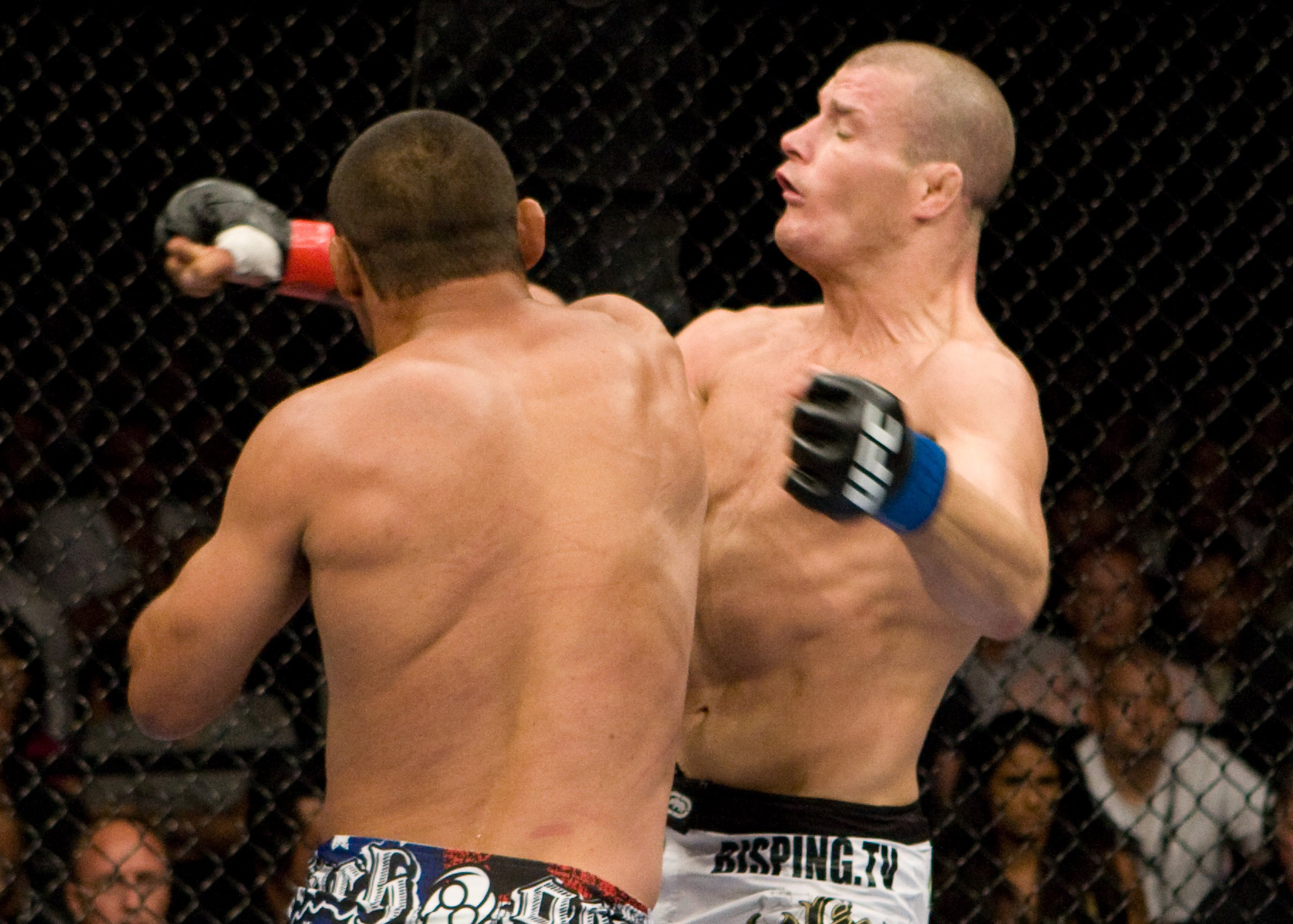 This fight was very awkward to shoot as Silva was just playing around and causing Griffin to miss with everything. I just remember thinking to myself how this guy (Silva) was on a different level than anyone else in the sport. To get in there with a former champion and very dangerous guy in Griffin, and just toy with him. 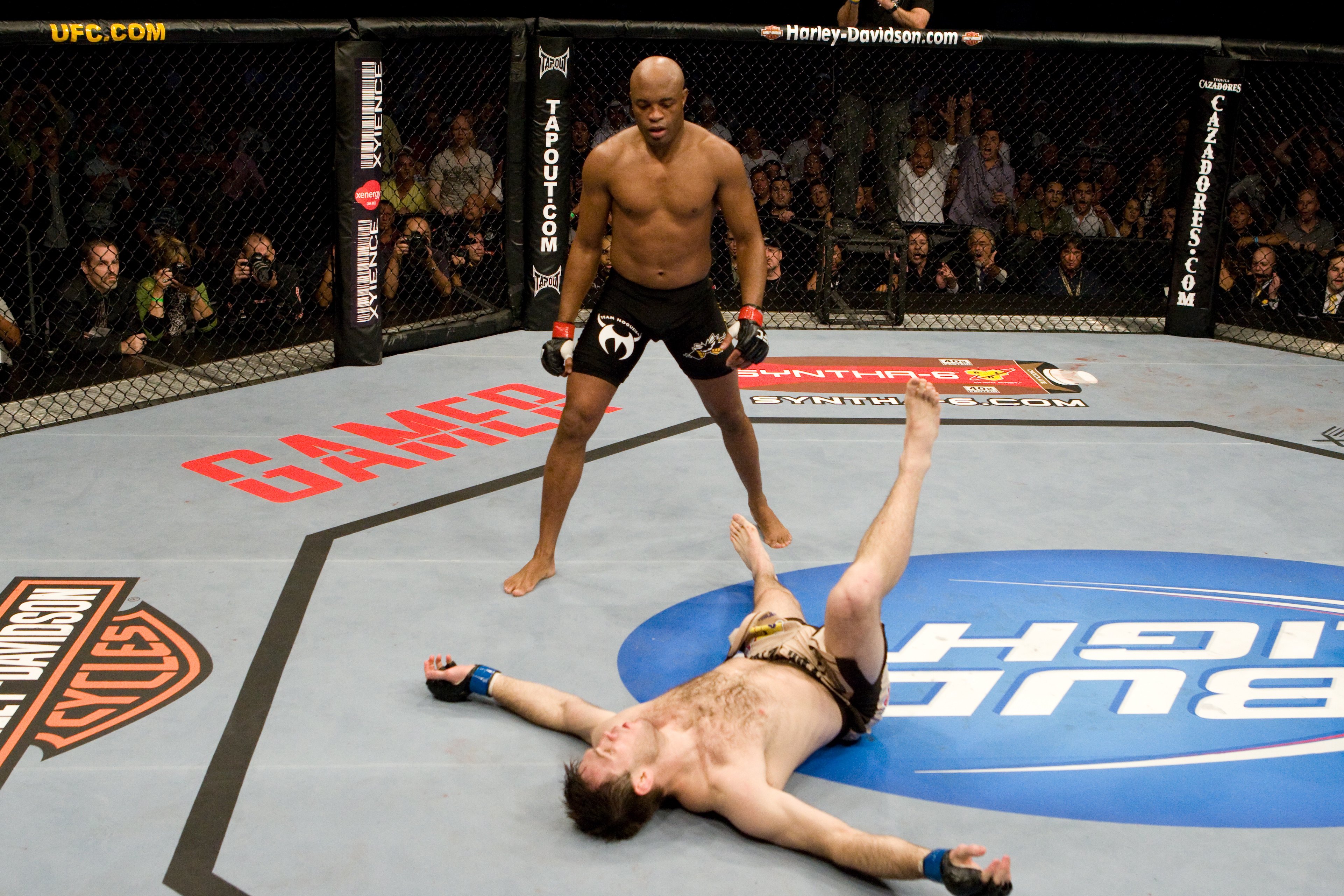 One of my favorite knockouts ever. What I love about this shot is how both fighters landed the same punch at the same time. Condit just had the better chin in that moment. 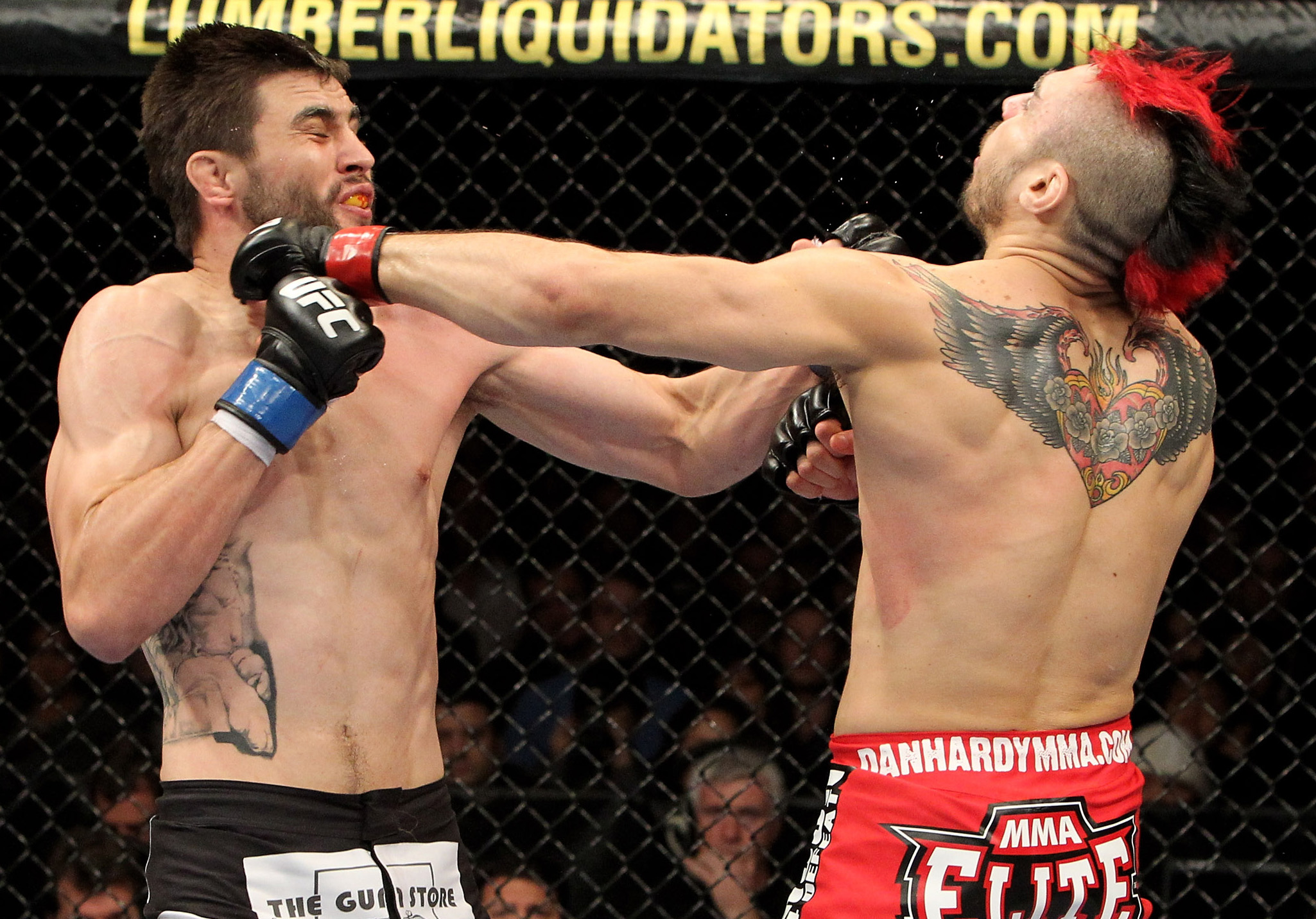 I’m still amazed looking back that I was able to catch this knockout. It happened so fast and was at a strange angle to my shooting position. It was a very scary moment with how hard Etim fell. Luckily, he was OK after a few minutes. 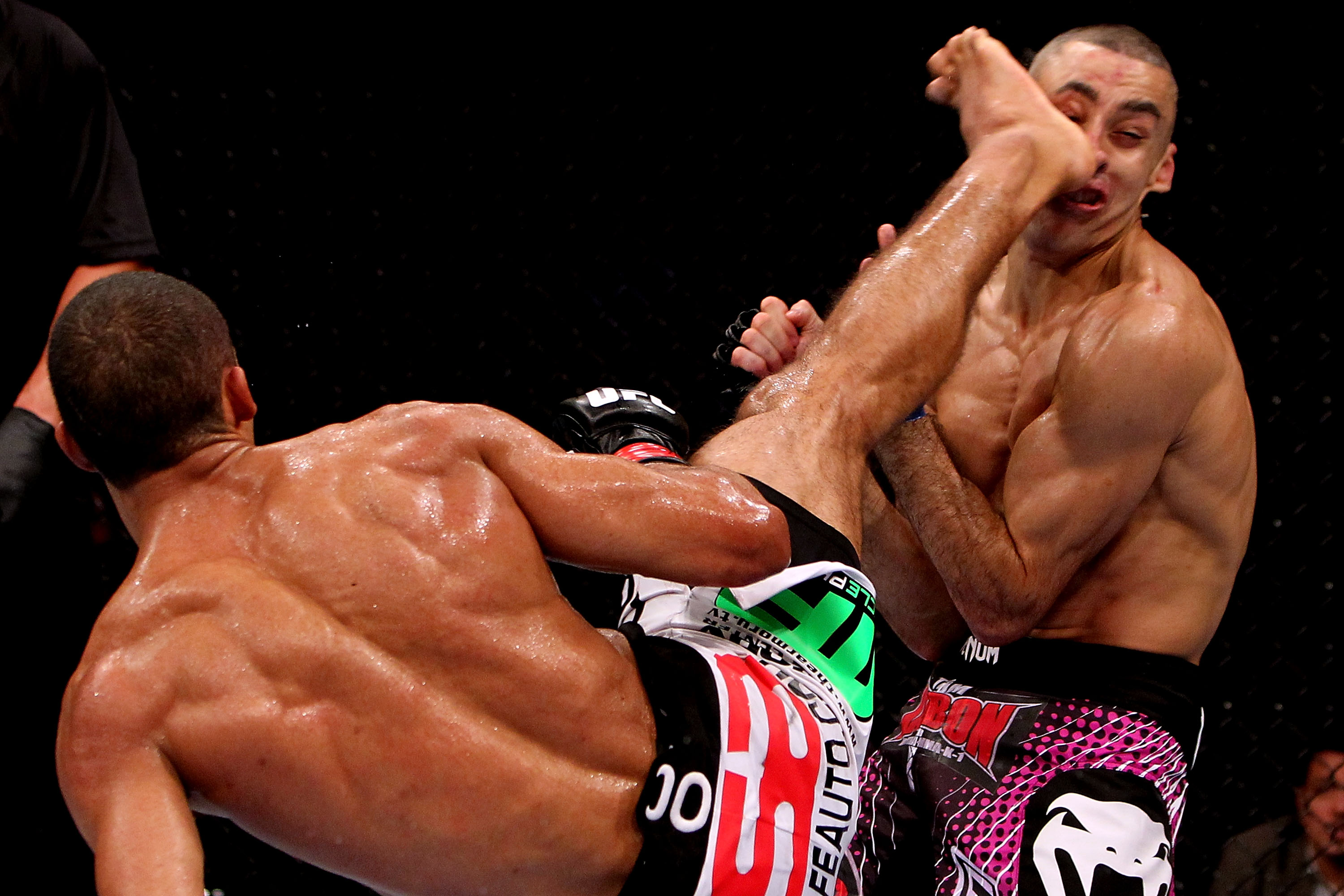 One of Bigfoot’s greatest performances in the Octagon as he was able to trap Browne against the cage and land a bomb of a right hand. 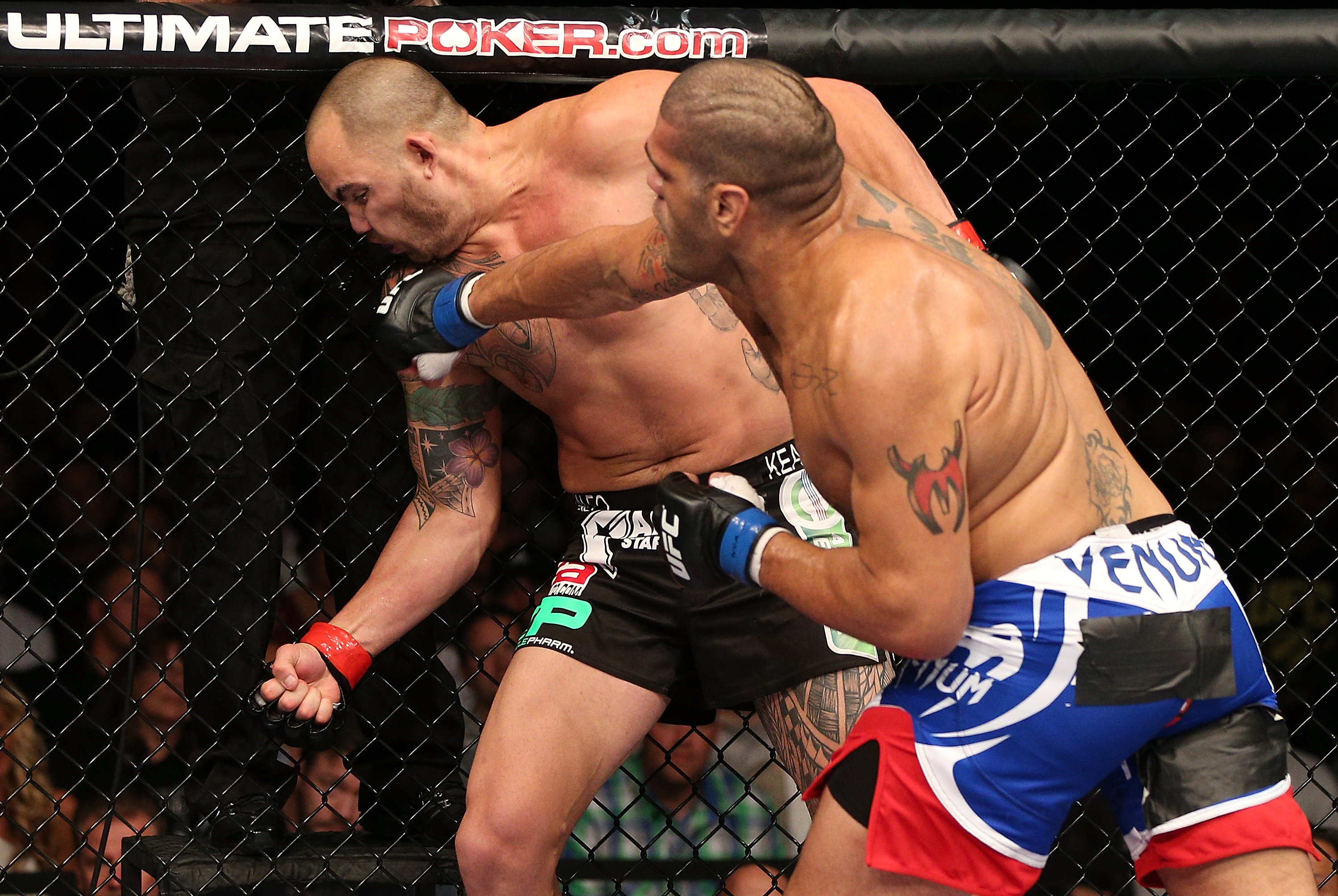 In his very next fight following the Browne knockout, Bigfoot pulled off a huge upset as he knocked out Overeem in the third round. This was a crazy fight and the crowd absolutely erupted at the finish. 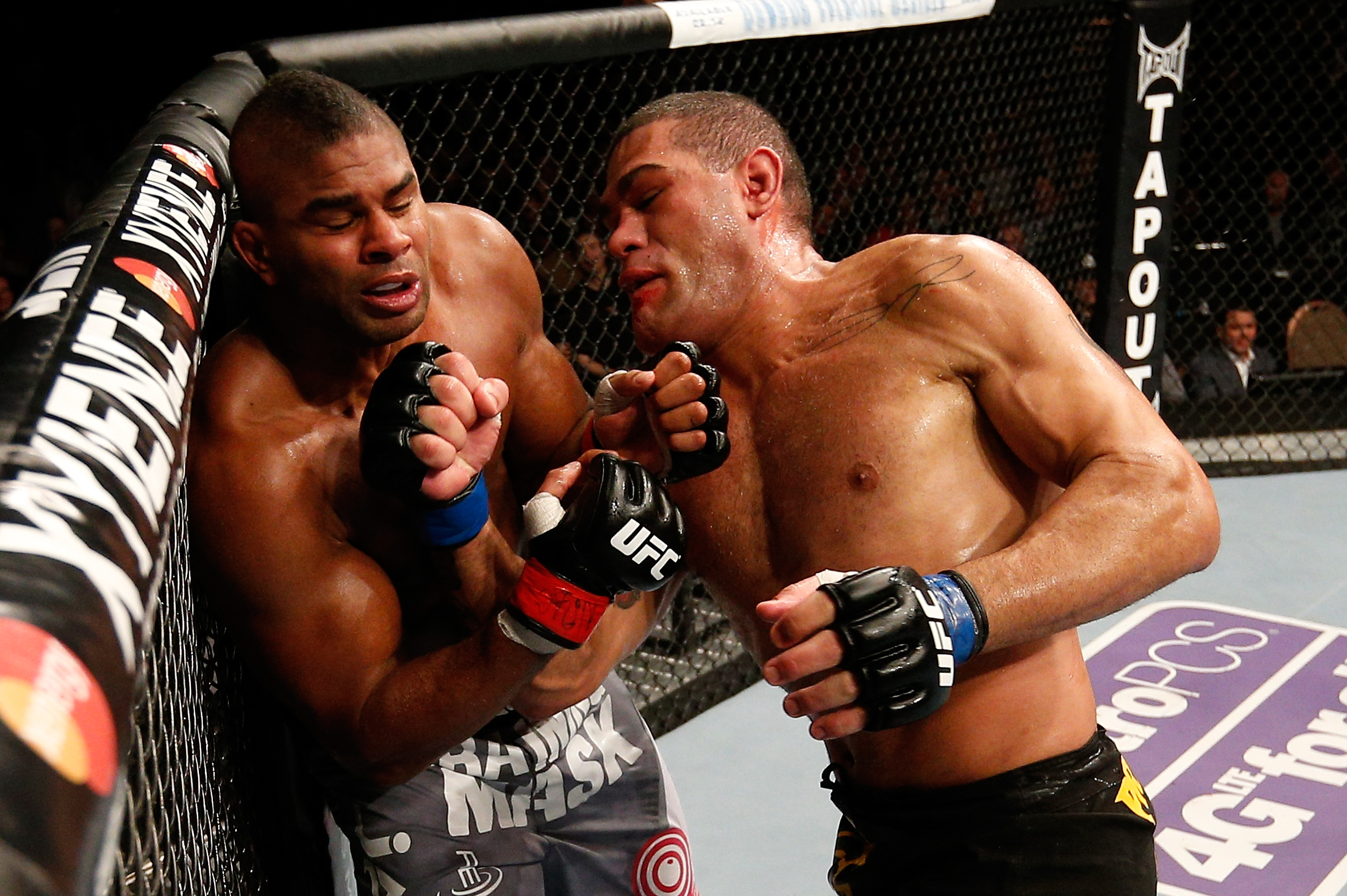 Probably my most trafficked photo I’ve ever captured. So many variables worked in my favor to make this shot. The angle was just right, they were just far enough away to bring into focus, and my timing was spot-on. Hunt had caught Struve with a few massive shots earlier in the fight and it seemed like every time he landed and Struve didn’t go down, he would put a little something extra on the next punch. This shot that finally dropped Struve ended up breaking his jaw and put him out of action for an extended period. 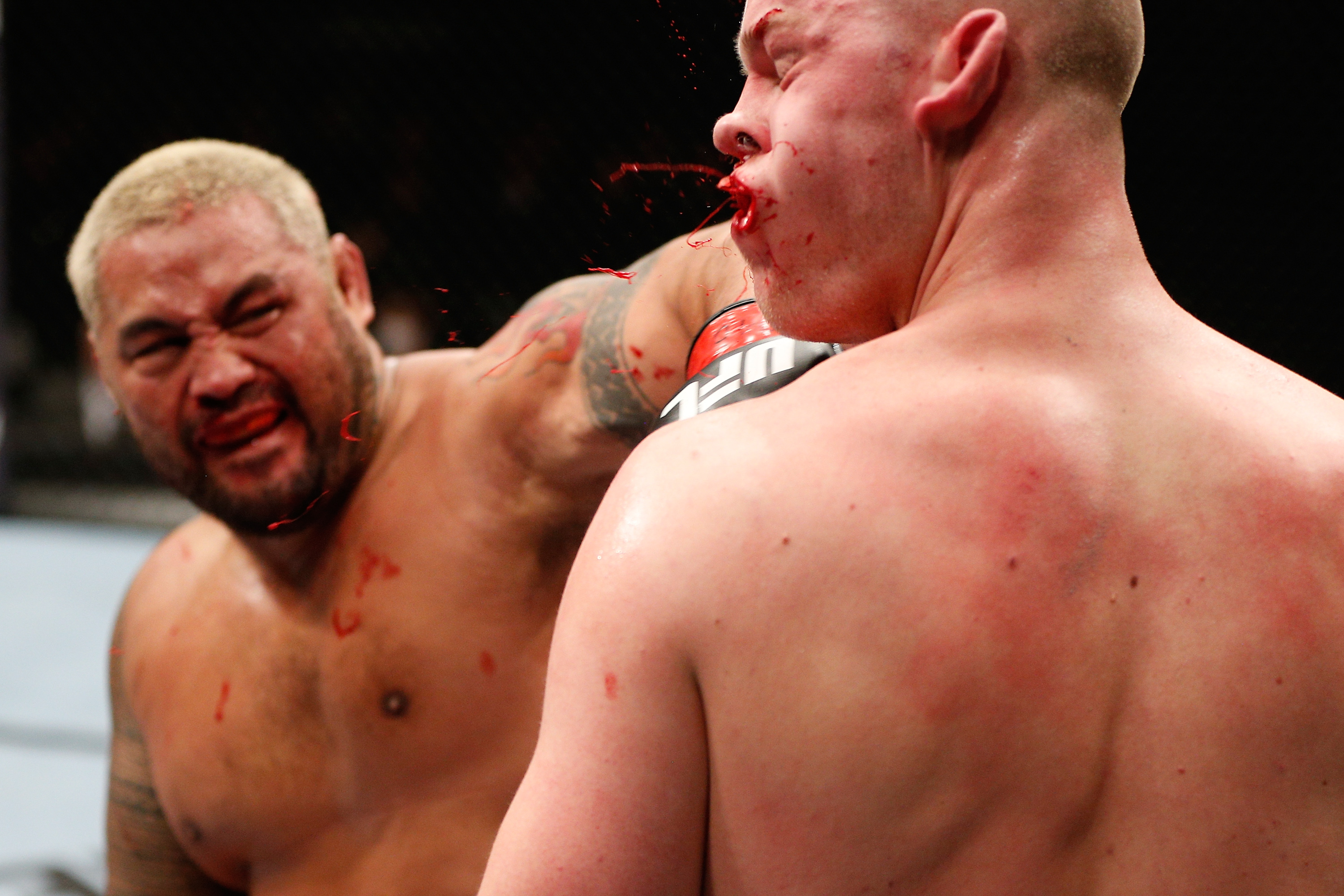 On the same card as the previous Hunt/Struve fight, this would be Brian Stann’s final fight before retiring. Both guys left it all in the cage for this one and ended up earning a “Fight of the Night” performance. 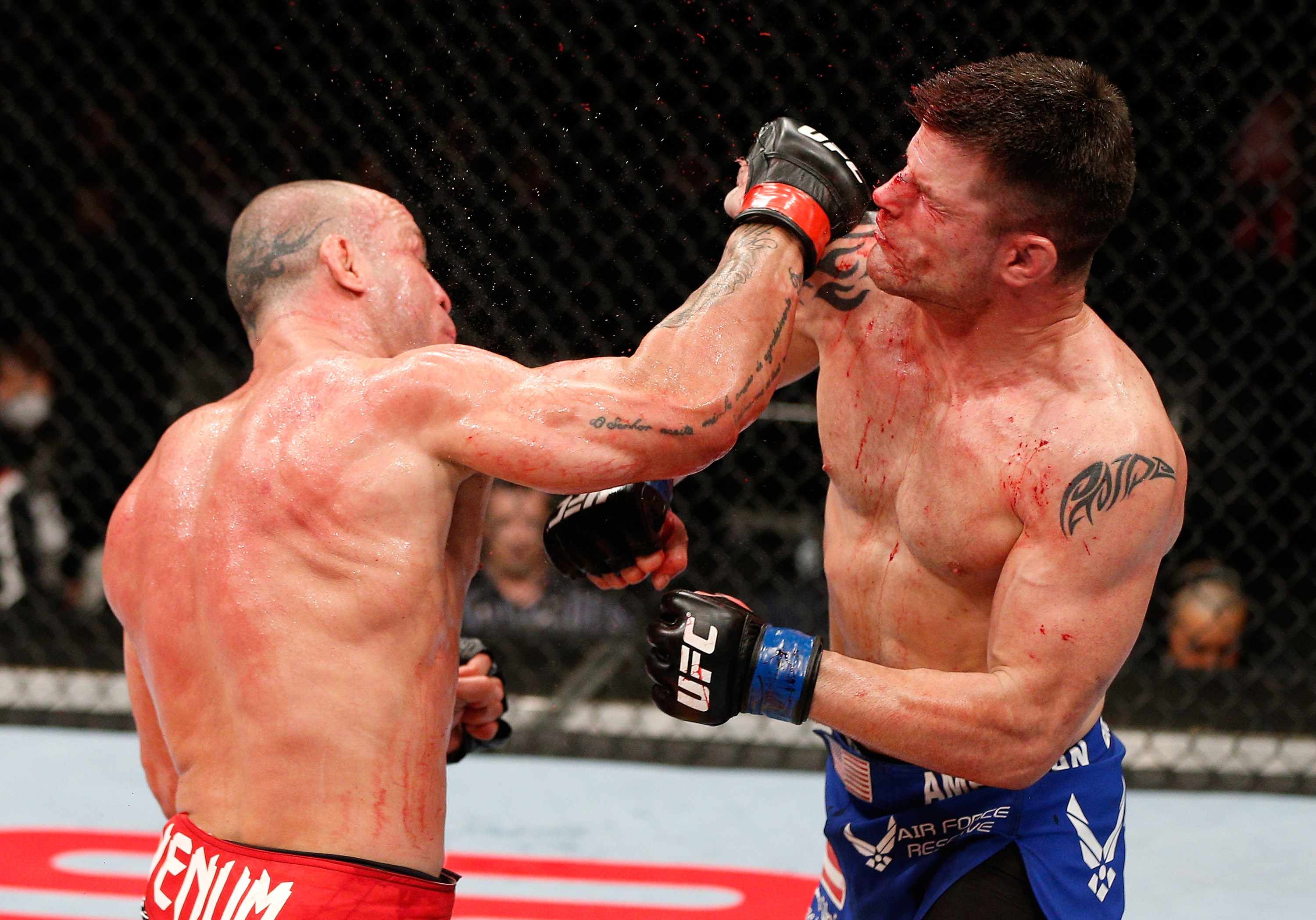 Another quick KO in the long and storied career of Vitor Belfort. He welcomed Strikeforce champion Luke Rockhold to the UFC with a stunning spinning heel kick, followed by a series of punches on the ground. One of those times I wished I’d had a little bit wider lens in my hand, but the frame still turned out great. 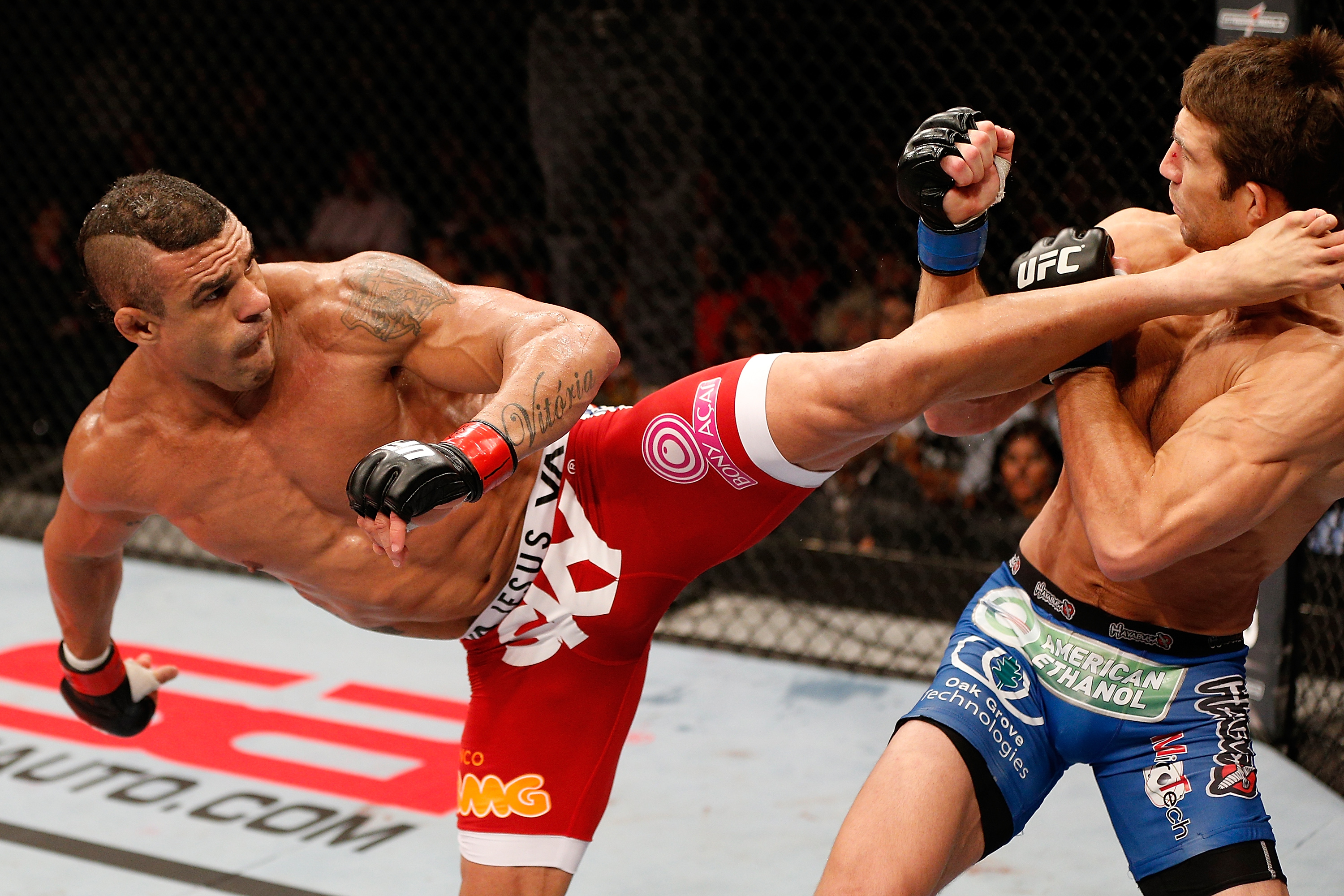 This is probably in the top three of everyone’s “Greatest Knockout” list. I was stunned as the fight unfolded. It was so hard to tell if Silva was clowning around or was really affected by the shots that Weidman kept landing. But then Weidman landed this left hook to drop Silva and put a stamp on one of the greatest upsets in UFC history. 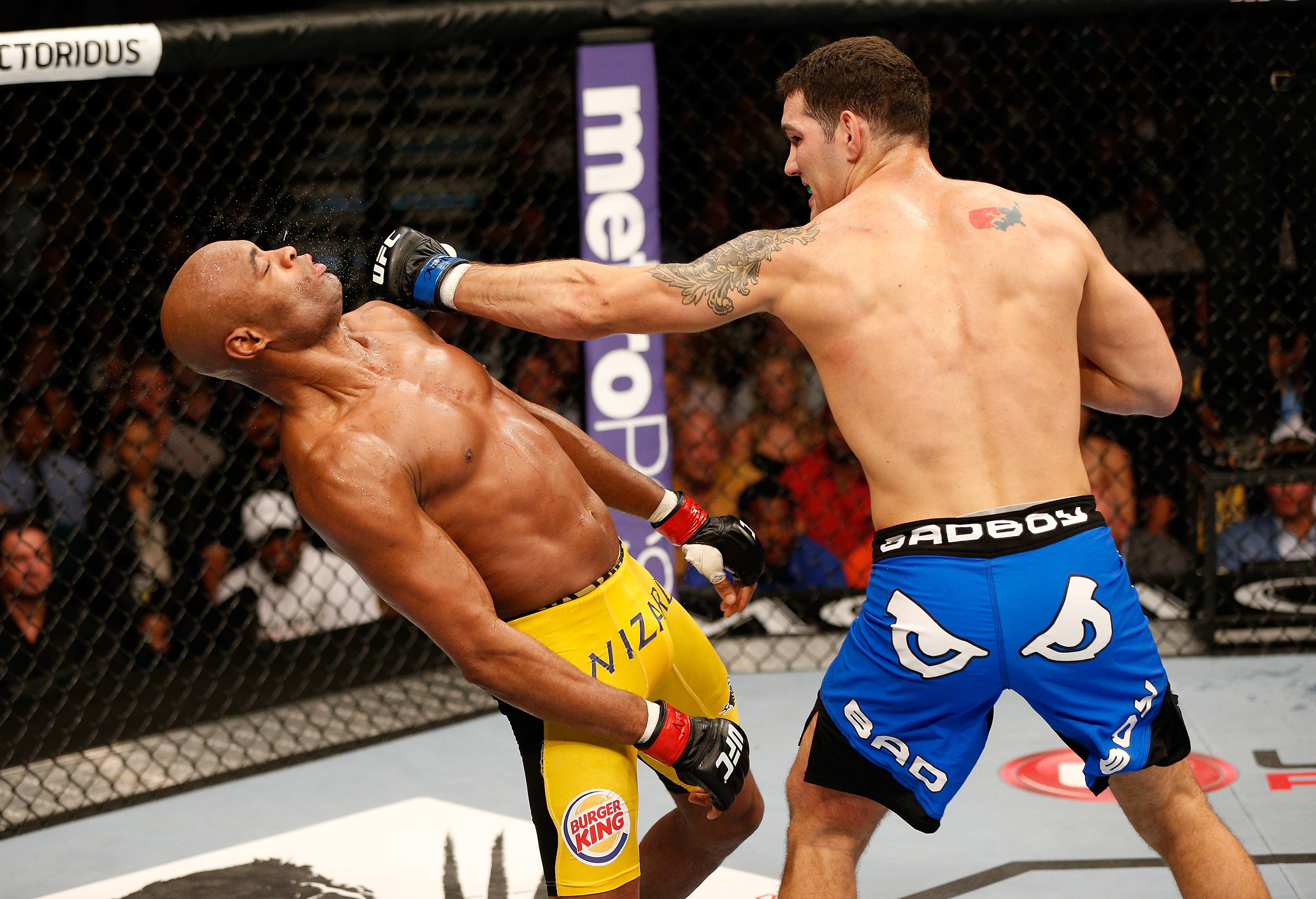 In an amazing comeback, Browne battled back from the brink of defeat to knockout Overeem. Browne was floored early in the first round by a knee to the body and it appeared that the referee might stop the fight. Ultimately, it continued and Browne was able to battle back and earn a KO victory with a front kick to the face followed by some hammer fists on the ground. 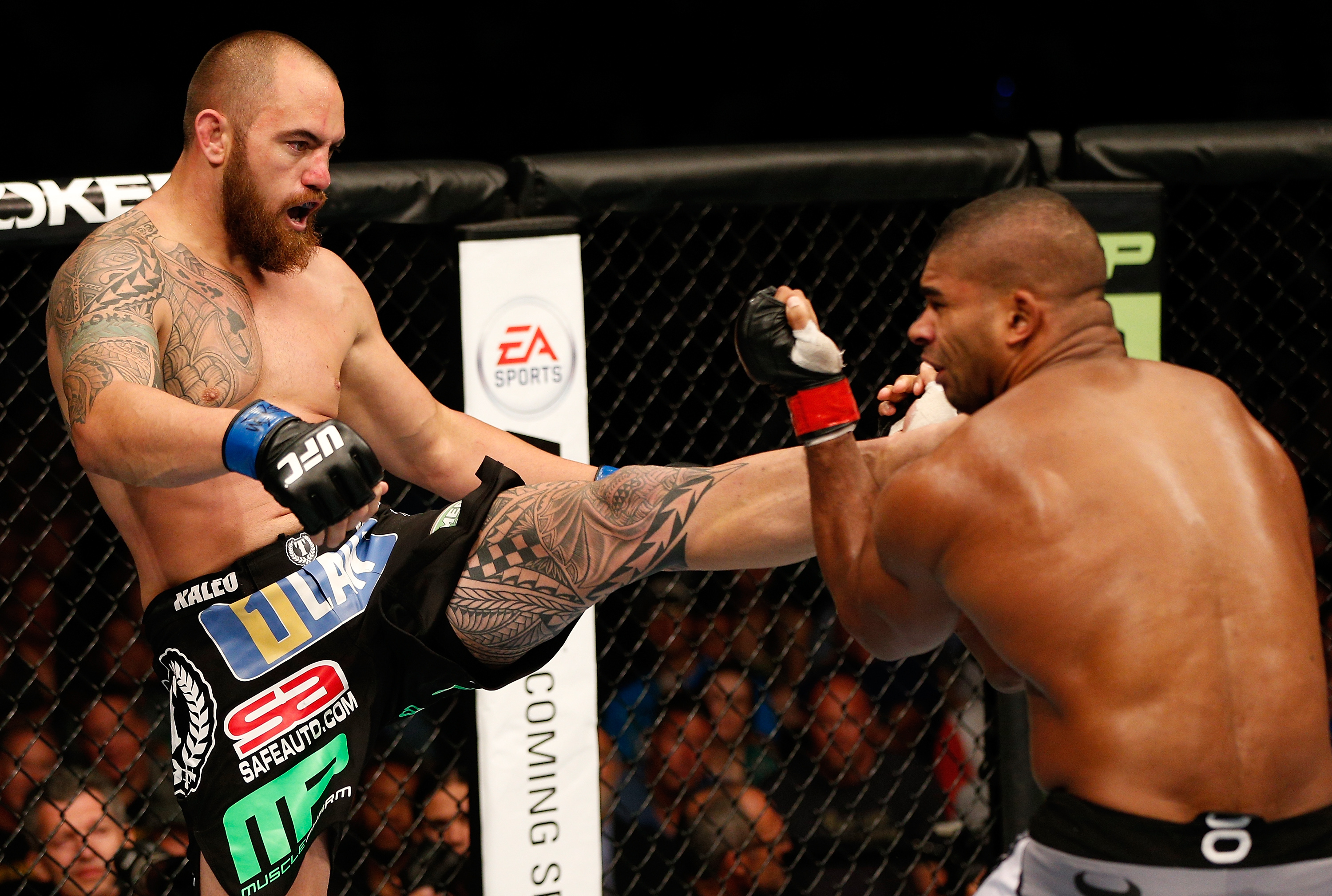 This fight was highly anticipated due to both fighters’ striking backgrounds. And even though it only lasted about 30 seconds, it delivered. Noons scored a brutal knockout with a right hand that dropped Stout, followed by this brutal left hand. 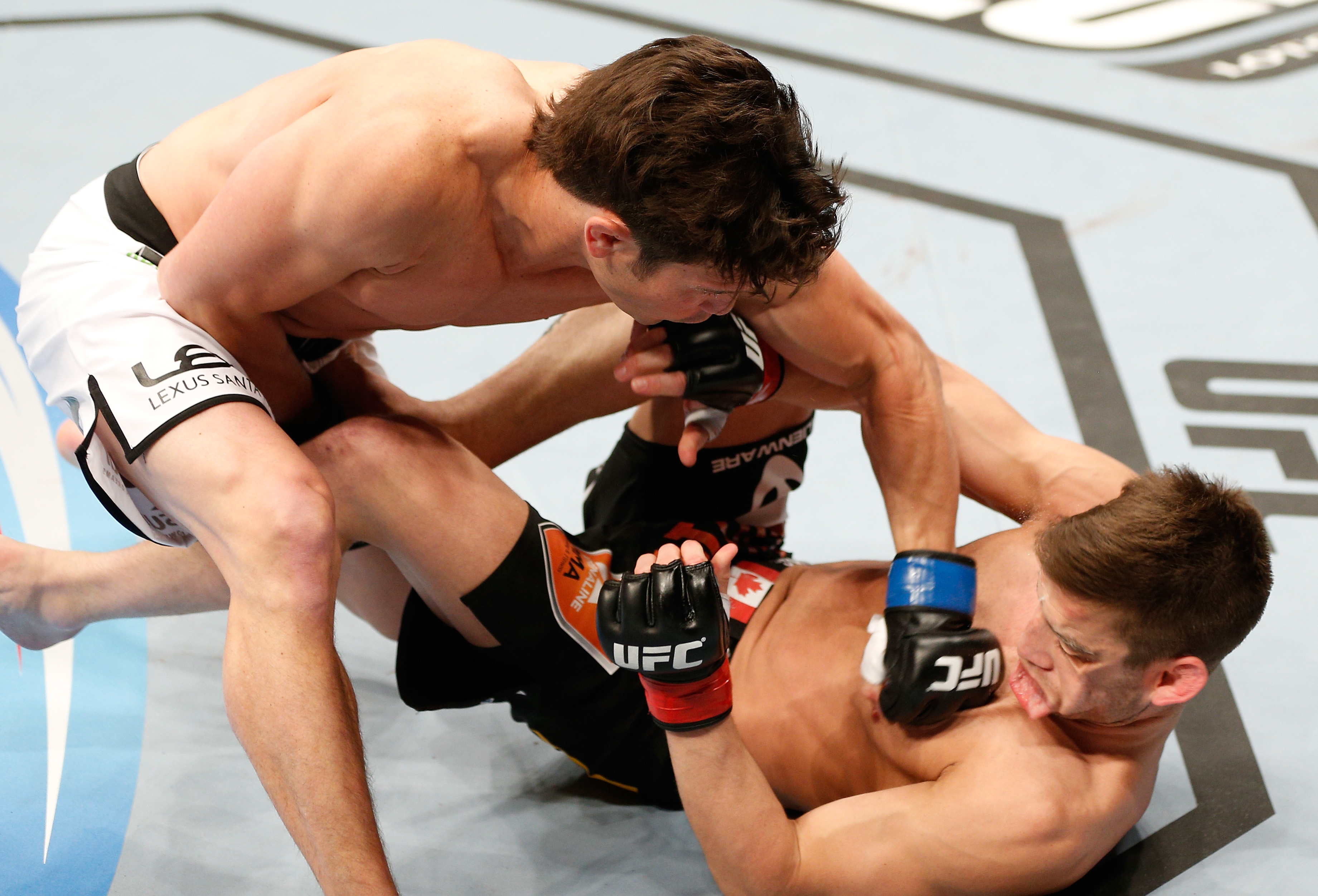 Such an incredible knockout and incredible performance all around by Holly Holm. Nobody expected Ronda to be beaten at all, much less dominated in such a way. Ronda fell to the ground as she rushed in trying to clinch Holly, and as she stood back up, she was met with this left high kick that she never saw coming. 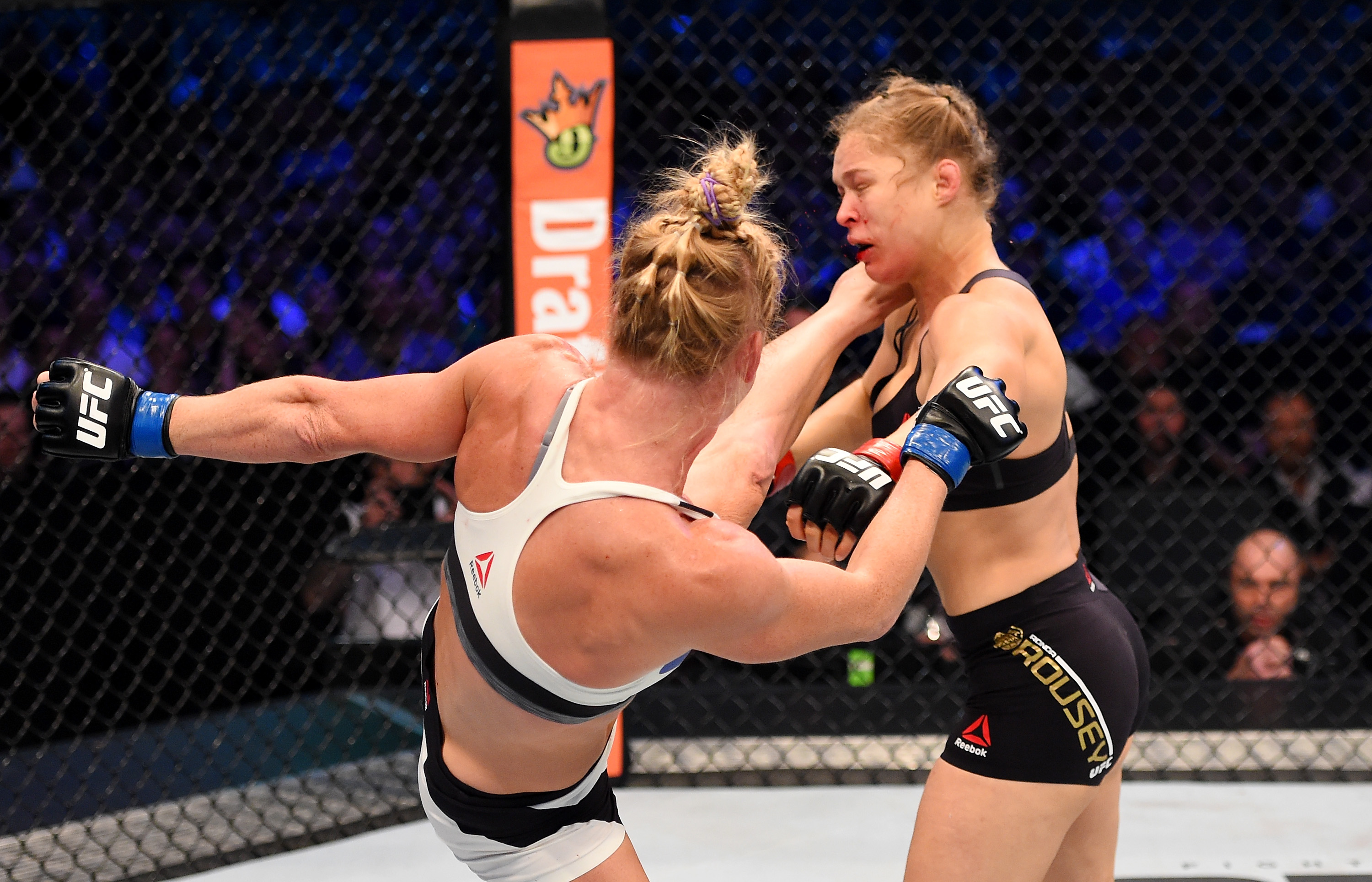