Bec Rawlings: Something to Fight For 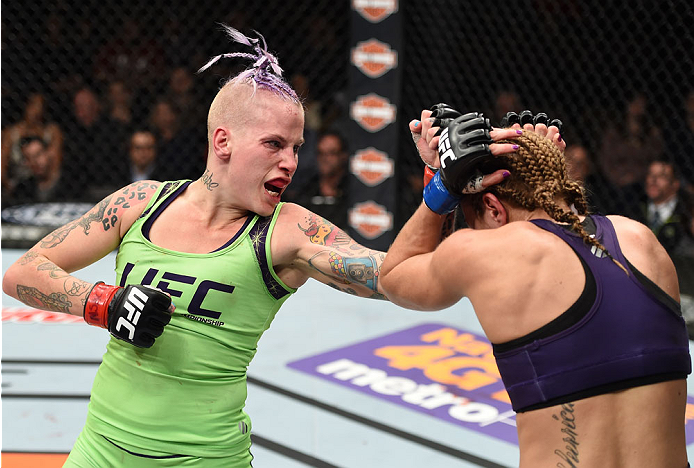 Australia’s “Rowdy” Bec Rawlings believes that not everybody who competes in the UFC’s Octagon is a fighter.

Mother-of-two Rawlings thinks that’s a key distinction between herself and Lisa Ellis, her opponent this week on the UFC Fight Night: Miocic vs Hunt card at the Adelaide Entertainment Centre.

“I don’t really think she (Ellis) is a fighter at heart, I think she’s a competitor. She’s competed in wrestling all her life, and I think MMA was just something she branched off into. I don’t feel like she’s a fighter,” Rawlings said of her Ultimate Fighter season 20 teammate. ”And you can tell that by watching her fights. She goes in to win by scoring points, takedowns and things like that, whereas I’m going in there to finish my opponent. I’m going in there with malice, almost. So I think that’s the difference between me and her.”

Between friendly training partners in MMA, what happens in training usually stays in training. But Rawlings and Ellis are not friends. With bad blood between the two stemming from their time on TUF, there’s no cause for the usual etiquette surrounding what goes on in practice.

“I feel like I’m actually better than her in all aspects. Maybe not wrestling, but grappling I know for sure that I am. I trained with her in the house and she knows that I can submit her whenever I want, which I did,” Rowdy said. “So wrestling is her game plan, and she doesn’t really have much when it hits the ground. She’s kind of stuck in a hard place; I’m gonna light her up on the feet and I’m gonna submit her on the ground.”

That said, Rawlings isn’t expecting the same Lisa Ellis from the show and admits both of them aren’t the same fighters anymore.

“I can’t underestimate her at all. I’ve improved since the Ultimate Fighter, I’m sure she’s improved. We’re professional athletes, we’re in the gym every day trying to improve our skills and evolve as fighters. I’m not taking too much from what happened in the house but I definitely feel like I’ve evolved more.”

Rawlings’ debut fight in the UFC was a decision loss to Heather Jo Clark. While Rawlings rallied in the third round, hurting her opponent with an uppercut, it wasn’t enough to steal the fight. Rawlings says it was a learning experience.

“I’ve been working on not coming out and starting slow. My previous losses have been because I’ve let the first round and part of the second round go; I came in slow and let them win those rounds. I’ve definitely been working on being aggressive from the get go and just trying to pull the trigger as soon as the bell sounds. That’s definitely one thing I took from the Heather fight.

If you check MMA news sites from time to time, this probably isn’t the first time you’re reading about Rawlings. After revealing that she was a victim of domestic violence during her relationship with her ex-husband, Rawlings’ personal life has been a topic of discussion among fans more frequently than she expected, or wanted.

“I feel like at the beginning of my career I let a lot of people in on my personal life and my personal issues. And now a lot of people feel like they’re entitled to know the ins and outs of my personal life. That’s definitely a little bit frustrating, but I’ve only got myself to blame for opening up to begin with, not realising that people would actually care about what’s going on in my personal life,” she laughs. “It’s nice to know I’ve got a lot of supporters out there. Ultimately, they inspire me and they motivate me. it’s nice to know that people like to watch me fight and love my crazy antics as well, so it’s always nice to be loved I guess (laughs).”

This Saturday, Rawlings believes she’ll be a talking point among MMA fans for a different reason. With a full training camp at San Diego’s Alliance MMA behind her, she’s looking forward to introducing the world to the best version of herself yet.

“I started going to Alliance a few weeks before I went into the Ultimate Fighter house but this is actually the first camp I’ve been able to have out here in San Diego. I’ve focused eight weeks of my life, just training, just eating, just sleeping,” Rawlings said. “This camp’s been amazing; I’ve got some of the best coaches in the world putting 110% into me and making sure that I’m ready for this fight. So it’s going to make a huge difference, and I’m actually really excited to get in there and show everyone what I’m really capable of with full 110% commitment to my training camp with no distractions.”

There’s a downside to Rawlings in making the changes necessary to be the best fighter she can be: spending time away from her family. But the resident of Brisbane, Australia is doing it for them.

“It’s tough being away from my boys, but they know why I’m over here and they understand that ultimately it’s for them. This is my job, this is my livelihood, so I’ve got to put it all on the line and sacrifice a lot of things. That definitely fuels my fire more. I’ve got something to fight for and I’ve got something to motivate me even more.”