The Beautiful Mind of Mark Munoz

“I want to prove that I’m not just a ground-and-pound guy or a wrestler.
I want to make a statement that I’m a mixed martial artist and am
improving in every aspect.”- Mark Munoz 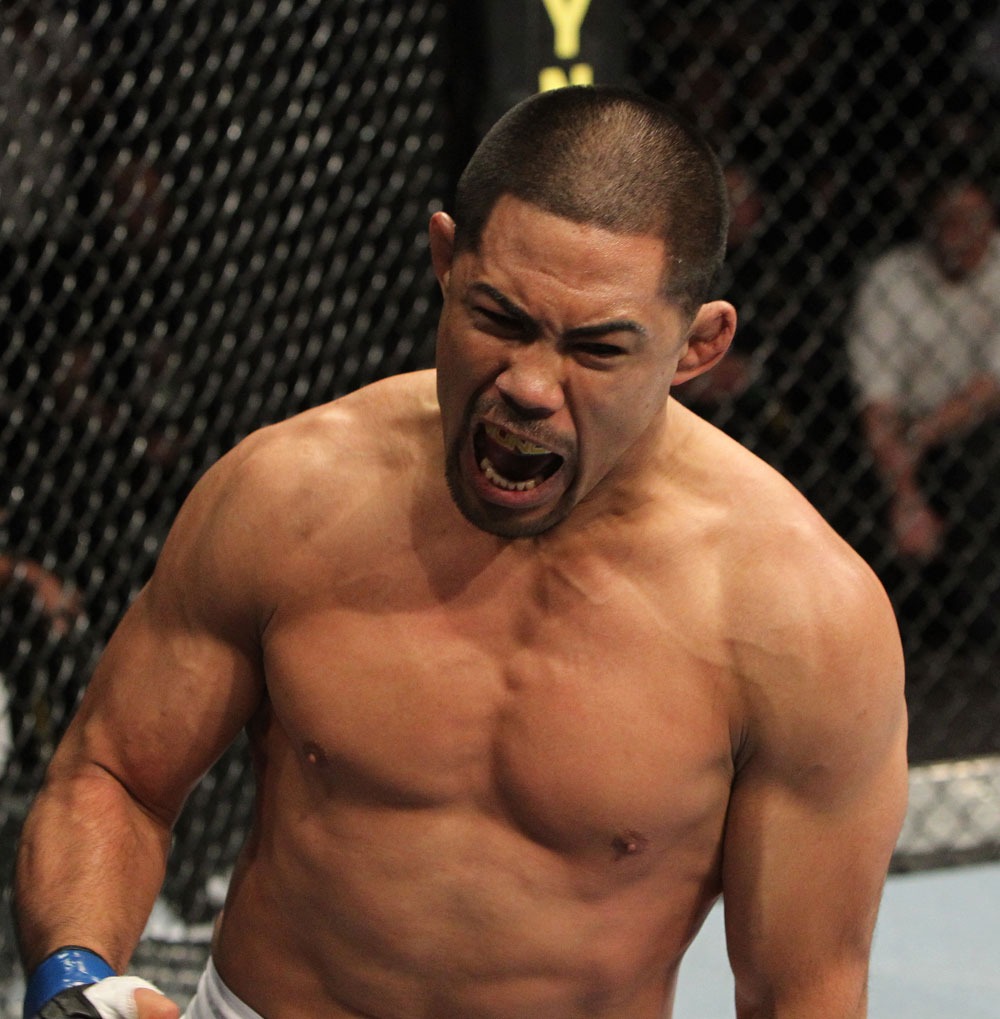 Mind power, particularly learning to perform exceptionally under pressure, has fascinated Mark Munoz for years. The obsession even compelled him to pursue a master’s degree in sports psychology several years ago. And judging by Munoz’s lofty achievements – 2001 NCAA wrestling champ and a 10-2 mark as an MMA pro – the 33-year-old Filipino-American is plenty tough from the neck up.

In the weeks leading up to Saturday’s UFC 131 clash with Demian Maia (14-2), Munoz has employed his usual bag of mental tricks, including lots of visualization techniques. The rising middleweight already battled the Brazilian jiu-jitsu wunderkind many times inside his dome.

“It’s been so many times, too many to put a number to,” Munoz said.

Does Maia ever win?

It’s virtually an unwritten rule of visualization: No matter how the imaginary bout plays out, always let it end with the other guy’s demise.

A frequent training partner of UFC middleweight champ Anderson Silva and the Nogueira brothers, as well as other BJJ black belts from Brazil, Munoz feels he has a strong handle on Maia’s tendencies and potential surprises.

“He’s one of the best BJJ practitioners in MMA, very dangerous on the ground,” Munoz said, citing the obvious trouble spots for dealing with a man who has finished eight of his foes with top-shelf submissions. “He’s also ever-improving on his feet and with his wrestling takedowns … I’ve seen a vast improvement in his standup. When he fought Kendall Grove and Chael Sonnen, he actually looked pretty good there, too. When (Maia) fought Anderson he was on, man. I trained with Anderson and it’s hard to catch him (with a takedown) when he’s moving like a butterfly and stinging like a bee. But Demian did tag him a few times. ”

Munoz, one of the harder-hitting ground-and-pound specialists in the UFC, said that many people have counseled him to avoid the deftly slick Maia altogether on the mat. But the Oklahoma State University grad intends to be defiant.

“I welcome the ground game as well,” Munoz said. “I want to prove that I’m not just a ground-and-pound guy or a wrestler. I want to make a statement that I’m a mixed martial artist and am improving in every aspect.”

Living and training out of Orange County, Calif., along with the likes of Jake Ellenberger, Jason “Mayhem” Miller and Krzysztof Soszynski, Munoz has also occasionally trained with Strikeforce heavyweight Fabricio Werdum, Mauricio “Shogun” Rua and a BJJ black belt named Marcel Lozado, who is intimately familiar with Maia’s game.

“I’ve trained with a lot of guys that have trained with him, so it’s a very tangled web that we’ve woven,” Munoz, winner of five out of his past six fights, said of Maia. “A lot of my training partners do a lot of the things that Demian Maia does. Marcel Lozado is one of my training partners for this fight. He’s my jiu-jitsu instructor at my gym and he’s actually beaten Demian Maia in competition, so he’s very familiar with what he does. A lot of jiu-jitsu guys that I train with know his game and give me a lot of insight on what (Damian) does.”

Munoz, whose parents hail from Manila, is inspired by boxing superstar Manny Pacquiao. The two fighters have actually met on numerous occasions at the Wild Card Gym in Hollywood, Calif.

“Yes, I actually trained over at Wild Card Gym with Freddie Roach and I met Manny there a few times,” Munoz said. “I have a funny story to share: I went to Wild Card Gym … and they actually let me through -- because they usually shut the door when Manny is training. So they let me through and Manny was just finishing his workout and was walking through and I was changing. I pulled up my shorts and Manny walked through the door with five other people and they were massaging his legs and stuff and he looked at me, I looked at him and he gestured at me like, ‘Hey, watch this.’ So he drank some water and starting yelling, ‘Aaaaah’ like he was cramping up and then a dude looked up and Manny spat water in his face. I was like, ‘No way, he just did that!’

“Then everyone started cracking up laughing and having a water fight inside of the locker room. It was pretty cool to see the camaraderie that he had with his camp. That was something I really wanted in my camp. I saw how he treated everyone outside of the ropes, outside of boxing, he is a great person. We often put people on pedestals, especially Manny Pacquiao. He’s had so much success and obviously I’m shooting to have the same thing. Just to see him outside of that arena hanging out and chilling with his buddies, it was awesome to see.”

Munoz said he once took a picture with Pacquiao and secured an autograph for his father. Just one problem: Munoz can’t find the picture.

“I have to find that picture, man, I have to get that picture,” he said. “I’ve been wanting to blow up that picture and put it up somewhere but I can’t find it! I might have to go back and get another picture with him.”

Munoz aspires to follow in Pac Man’s footsteps and he could be making some progress.

“Some have told me that I’m one of the top three or four athletes in the Phillipines. And I was like, ‘What, are you kidding me? That’s crazy.’ Because they have Manny, obviously, (WBC and WBO bantamweight champ) Nonito (Donaire Jr.), me and Brandon Vera. Filipinos are very proud of Manny and us having success in combat sports. Manny packs stadiums with Filipinos so I think that’s why the UFC wants to do shows in the Philippines to tap into that fan support and enthusiasm that the whole country brings and they want to unlock it. So I need to go there, for sure.”

More immediately, however, Munoz must figure a way to turn back the threat in front of him. He sounds so confident of victory, yet that has not always been the case.

“When I was wrestling, I had all of these negative thoughts in my head,” Munoz said. “There were so many things I did wrong that I wanted to fix. I’d say about 98 percent of the matches I lost were because of mental mistakes. A lot of it was due to my preparation leading up to the wrestling match. I lost 11 times in college and twice in MMA, and 98 percent of the time it wasn’t because the other guy was more physically gifted than me, it was because I made stupid mistakes in the match or the fight. So it’s about being prepared physically and even more mentally. I use a lot of psychological skills to prepare for my fights. A lot of people go into fights doubting themselves. When you ask somebody what it takes to become a champion, they’ll say it takes discipline, it takes desire, it takes dedication, commitment … they’ll say all of these traits that are mental attributes. A lot of people train the physical without training the mental. I do a lot of visualization. If you see it mentally, you can do it physically.”

During the course of the interview, Munoz provides a revelation: He has put his master’s degree on hold to focus on MMA. For the time being.

“I just have to do my thesis,” Munoz said. “I have my topic … I did all the course work, I just have to do my thesis on sports psychology. I’ve been out of my coursework for about a year now. I have my topic and it’s just sitting there. And my advisor hasn’t contacted me in about six months, so I think she gave up on me. I need to work on it. A thesis is six chapters and it can be anywhere from 100 to 150 pages. It takes roughly six months to do. But my topic is going to change because I’m involved in MMA now, so it will probably include wrestling and mixed martial arts.”

“It goes through my mind. It’s like having the devil and an angel on my shoulder. One voice says ‘Get your master’s degree!’ The other voice says, ‘No, you don’t need it!’ There’s that battle just going through my head. I know I need something to fall back on, I need a Plan B, so I need to go get it.”

The bout with Maia, the biggest of Munoz’s career, is just days away. Most everything from here on out will be mental fine-tuning. The voice in Munoz’s head will tell him some of the same things that he tells the athletes he coaches at wrestling camps and in MMA.

“I tell all my fighters: You know what the guy does best but you don’t want to worry about what he does, you want to concentrate on what you do best,” Munoz said. “You know in the back of your head what he does, but you go out and execute what you do. So I practice his tendencies, how to keep good posture …but at the same time I’m going to fight where I want to fight, not where he wants to fight. And if I do get there I’m going to scramble back to where I want to be.

“Before I go into the Octagon I use a psychological skill called ‘countering.’ There will be all these doubts inside of me. ‘This guy is a Brazilian jiu-jitsu black belt,’ … But you counter it with positive, concrete facts like, ‘Oh, I’ve rolled with lots of Brazilian jiu-jitsu black belts and I’ve tapped them and they don’t tap me.’ You just counter back with those positive, concrete facts.”