Beating Johnson not an upset in Borg's mind

Ray Borg doesn’t have pictures of Matt Serra, TJ Dillashaw or Chris Weidman on his wall as reminders of the architects who pulled off three of the biggest upsets in UFC history. He doesn’t even tape a photo of Demetrious Johnson on his mirror to keep him focused on what awaits him in the main event of UFC 215 in Edmonton this weekend.

He’s just 24 years old, but he’s a professional. He knows what needs to be done to break Johnson’s historic streak of 10 successful title defenses, and as Saturday approaches, there is no hint of nervousness in his voice.

“It’s just been business as usual, really,” Borg said of the lead-up to the biggest fight of his career. “It’s been pretty easy. Not too hectic, not too many media obligations, and I’m getting prepared the same way I would for any other fight. I’m just making sure I work extra hard so I come home with that win.”

The win. The belt. The glory. If the Albuquerque native fights the best fight of his life against a future Hall of Famer, he can have it all. Of course, there were others who knew the same thing before stepping into the Octagon with Johnson. Olympic gold medalists, jiu-jitsu black belts, fast-handed finishers, and gritty wrestlers with long track records in the sport. All came up short against “Mighty Mouse.” 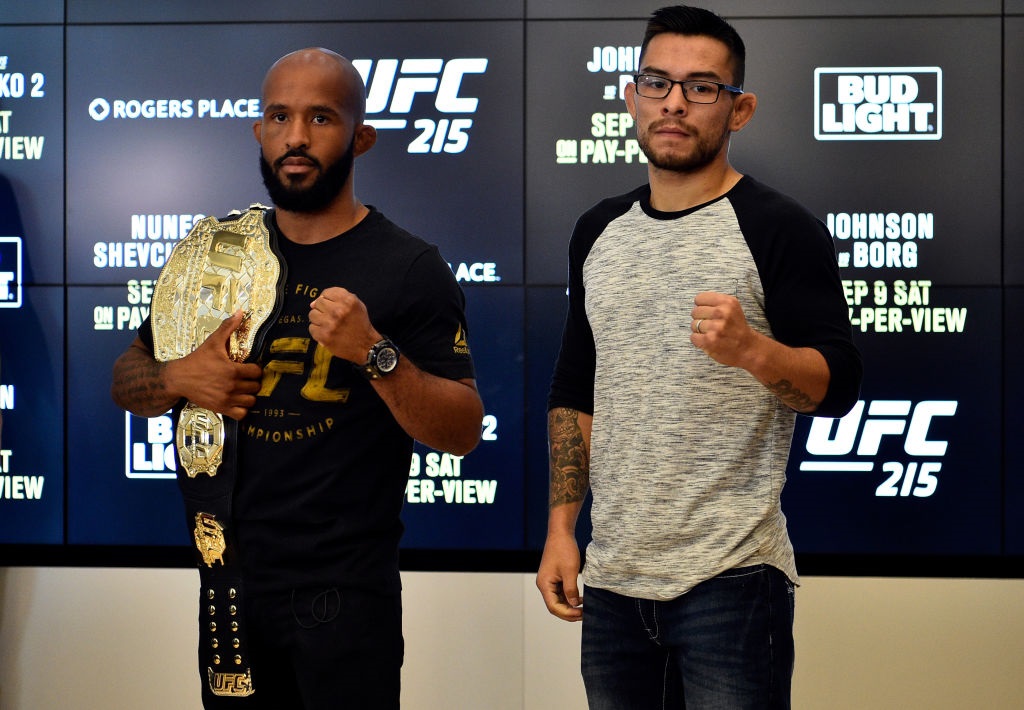 Long before he debuted in the UFC in 2014, Borg was thinking of this moment, plotting how he would one day be called a world champion. It’s a dream shared by anyone who puts the gloves on, but Borg was willing to make sacrifices others wouldn’t in order to get here.

“That’s one thing people really don’t understand,” he said. “You get people at a young age who get into the sport and they have financial backing and people supporting them, and I didn’t. I grew up rough, my parents didn’t have a lot of money, so this whole thing was on me. I’ve had to give up more than what your average 24-year-old kid would have to give up in his life.”

Borg remembers spending birthdays and holidays alone as a teenager, all in the interest of getting experience and becoming a fighter.

Training every day at that age is more of an inconvenience than anything else. A budding fighter trains with his friends, has energy for days, and the next morning it’s back at it because age hasn’t thrown in the aches and pains it does for other fighters. But when it becomes a solitary sport in and out of the gym, that’s when the fighters step up and the others step aside.

“If I had a grappling tournament coming up as a kid, my parents would always go out of town for the holidays and they let me stay by myself,” he said. “So I had to sacrifice friends, relationships and a normal childhood all for this moment. That’s why it means so much for me to beat Demetrious.”

At 24, he’s still young enough to have a “normal” existence, but he’s not willing to take his foot off the gas pedal yet.

“You never really know if you’re gonna regret things when you’re young. And now that my life has shaped up the way it has, I don’t have a single regret.”

In fact, if you ask him about joining the exclusive club of youngest UFC champions (if he wins he will be second youngest behind his teammate Jon Jones), he admits that he’s ahead of the schedule he made for himself when he turned pro in 2012.

“Before I was in the UFC, my timeline was that I wanted to be signed to the UFC by the time I was 23,” he said. “I just turned 24 and I’m fighting for the world title, so it just shows how fast I can progress, and the fact that it’s happening now, it didn’t feel like too long of a wait for me at all.”
Pre-order UFC 215 now | Get tickets to UFC 215 in Edmonton

To some it was, though, as Borg entered the Octagon as a 20-year-old in 2014 with a 6-0 record and plenty of hype behind him as a future star. A controversial split decision loss to Dustin Ortiz in his debut slowed the hype train, but after winning four of his next five bouts and picking up two Performance of the Night bonuses, with his toughest opponent being the scale as he missed weight twice, the spotlight focused on him once more.

But it wasn’t until he decisioned Brazilian contender Jussier Formiga in March that his internal alarm clock rang and let him know he was ready for a title shot.

“I’ve always been confident in myself to really beat anybody who was put in front of me, but there are reasons why there are rankings and reasons why we move up in the division,” he said. “That’s a self-indicator of whether you’re ready to take on the best in the world or not. And beating Formiga was that extra little, ‘Okay, I just beat the number three guy in the world, who has beat the majority of the top contenders who have actually fought for the belt, in his backyard, so I think it’s time.’”

It is. So on Saturday, he will attempt to put a stop to Johnson’s attempt at history while beginning his own championship story. There’s no pushing and shoving, no trash talk, just the two best 125-pound fighters in the world getting 25 minutes or less to prove who the better man is on Sept. 9, 2017. Borg likes it when it’s put that way, as a fight between two competitors testing their skills against the other on the sport’s biggest stage.

“It’s nice,” he said. “I think if there’s one thing Demetrious has never lacked, it’s respect and being a respectable guy. He knows what I’m after, he knows how serious I am about it,

He knows what I’m after, he knows how serious I am about it

and I feel like I’m more serious than any competitor he’s faced before, so I would expect him to respect me. If he didn’t, it would be even worse on his end.”

For that split second, it’s a reminder that for all the good vibes surrounding this bout, it’s still a fistfight, three O’clock outside of school for bragging rights and at least a day of walking around with your chest puffed out and head held high. Borg is ready for that, and for everything that would come with being a world champion. He even thinks life becomes easier for him should he leave Edmonton with a belt.

“I’ve dedicated my life to this sport, and with that being said, I’ve also learned what comes with being a champion, what comes with being at the highest level possible, and I am more than ready to take on everything that comes,” he said. “My life comes easier in a sense. I don’t have to worry about getting media attention because that’s gonna be there after I win this fight. Looking for fights is going to be easy. I don’t have to ask (UFC matchmaker) Sean Shelby to fight this guy or that guy because it will get me to the title. I’ll have the title and they’ll say, ‘Ray, this guy’s next in line.’ Okay. (Laughs) So everything that comes with being a champion, I am totally prepared for and I’m willing to take the bull by the horns.”

Yeah, Ray Borg doesn’t need any reminders from the past to let him know what he’s going up against on Saturday, because, to him, beating Demetrious Johnson wouldn’t be an upset.