Ever since Bea Malecki was a kid, she knew she wanted to grow up and not just do something in athletics but excel at it. Much to the chagrin of her dad and humor of a childhood friend, it took her a while to figure out what that sport would be.

“I tried everything,” Malecki told UFC.com. “I tried basketball, football, cheerleading, indoor hockey, and I went like six months on all the sports, so by the time my dad bought my clothes and everything for the team, I was like, ‘Nah. I’m going to quit,’ and he was like, ‘Oh God, OK.’”

Each time she started a new sport, Malecki said she would tell her friend that she would become the best in the world. Soon, the declarations became a bit of an inside joke to her inner circle, but when she finally started Muay Thai at 19 years old, she knew she was in the right spot. Her dad, however, said he would only buy her all the equipment if she stuck with it for a year, which of course, she finally did. Malecki, naturally, also stayed consistent in making sure she told her friend about all the success she saw for herself in her new venture.

“I remember, I came to her, and I was like, ‘I’m going to be the best in the world. I’m going to win this and that,’” Malecki said. “They were like, ‘Yeah, that’s fun. We believe in you,’ and then I won everything.”

Malecki went on to win the Swedish (twice), European and World Championships in Muay Thai (also earning a heartfelt Facebook post from her aforementioned friend along the way). From there, she felt an urge to find a new challenge, which brought her to mixed martial arts, but not without some push back from people. Instead of participating in the world championships again, Malecki – who also has an engineering degree to boot - opted for her first amateur MMA fight.

“People got pretty mad, like, ‘Oh, you could’ve (won) two times in a row,’” she said. “But I was like, ‘Yeah, but I’m doing this for me.’ What if I was still doing that? Then, I wouldn’t be here. I did that amateur fight, and from that moment, I felt that I wanted to be in the UFC.”

That road brought her to The Ultimate Fighter: Heavy Hitters, and although she fell to Leah Letson, Malecki eventually made her UFC debut and earned a submission win in her home country. She followed that with a unanimous decision win over Veronica Macedo in March 2020, but despite the early success, Malecki said she thinks she “sucked” in those first two outings.

"I swear to God I didn't know what I was doing in the Octagon the first time."@BeaMalecki talks about her @UFC experiences so far and why we can expect a better version of her to show up at #UFCVegas34 🔊⬆️ pic.twitter.com/1anTh1YtZu

“It looked terrible,” Malecki said. “It looks like I never ever did boxing or Thai boxing in my whole life. It’s always pressure, first time in the UFC, home arena, and I swear to God, I didn’t know what I was doing. I didn’t know what I was doing in the Octagon the first time. Maybe that’s the first-time experience, too, but I don’t know. I think I’m better than that.”

Unfortunately, Malecki hasn’t been able to build off those performances since then. She was tied to fight Tracy Cortez and then Norma Dumont, but a COVID-19 diagnosis and an injury scratched those matchups, respectively.

Malecki said it took her about three months to feel back to herself after getting COVID-19, which made the subsequent injury all the more frustrating. Now, though, she feels back to full health and eager to make the walk to the Octagon.

Moreover, she admitted she was in a “really, really bad place” during those initial two bouts, and so she approaches this fight against Josiane Nunes in a better headspace overall. 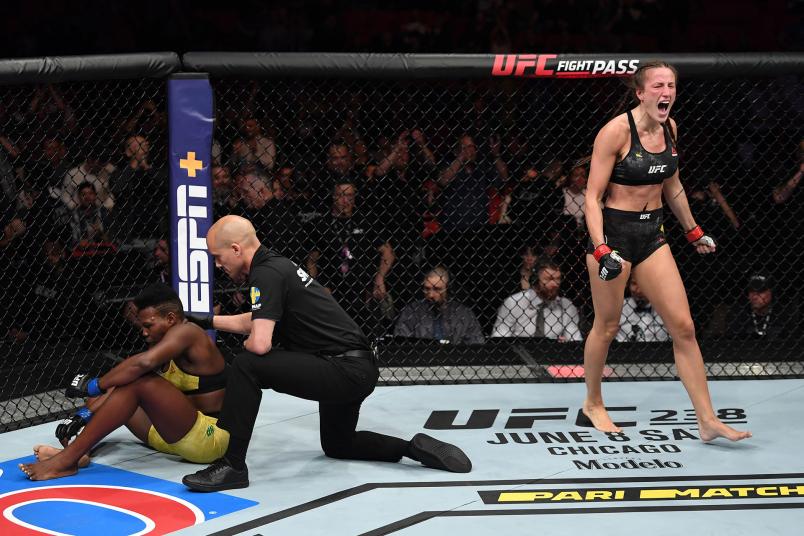 Bea Malecki of Sweden celebrates her submission victory over Duda Santana of Brazil in their women's bantamweight bout during the UFC Fight Night event at Ericsson Globe on June 1, 2019 in Stockholm, Sweden. (Photo by Jeff Bottari/Zuffa LLC)

It’s been a 17-month journey for Malecki between fights, but given her relative inexperience as a professional mixed martial artist, she knows she’s going to do some learning on the job in the UFC. Her confidence is evident, though, and that’s enough for any fight fan to be excited when she makes her return on August 21.

“I think people like to watch me because something is always happening,” Malecki said. “It’s not a boring fight. I’m an entertaining fighter, and they always said it in my Thai boxing fights. People looked forward to my fights because it’s always a show. Somehow, it’s always a show.”