To Be Ronda Rousey, You've Got to Beat Her

"I aim for the kind of fights that even the biggest hater can’t criticize, and that’s what I’m really aiming for in this fight." - Ronda Rousey 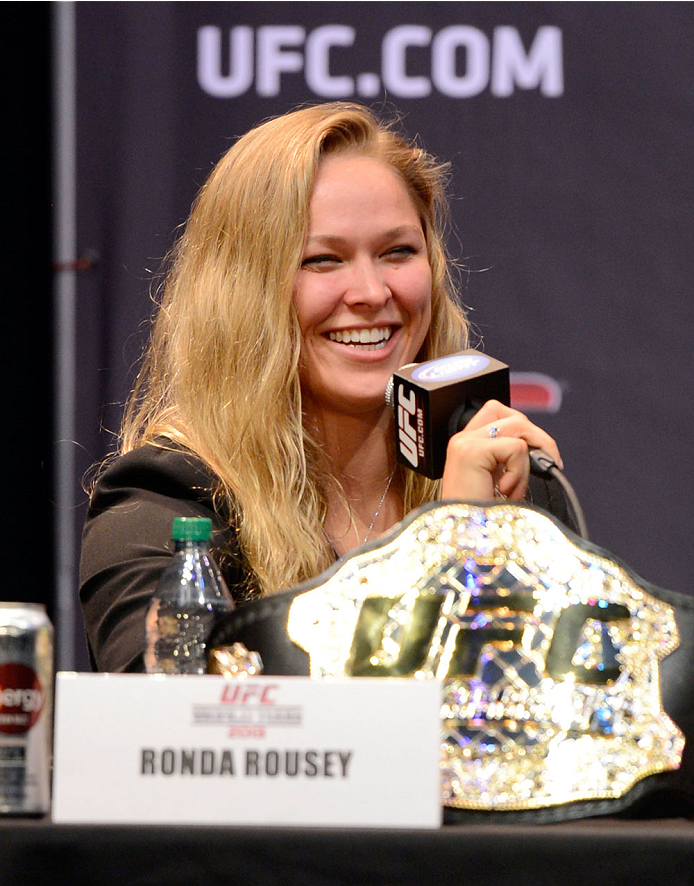 It’s been an interesting 2013 for Ronda Rousey. Everyone’s sweetheart as the year began thanks to her introduction of female MMA to the UFC, the women’s bantamweight champion took some hits during her stint as a coach on season 18 of The Ultimate Fighter thanks to her unwavering animosity toward the young lady she’ll meet on Saturday night in the co-main event of UFC 168, Miesha Tate.

In between her first UFC win over Liz Carmouche and her rematch with Tate, Rousey didn’t just coach TUF though. In fact, she disappeared out of the public eye as she worked on “The Expendables 3” and “Fast & Furious 7.” So when she returned to make the media rounds for UFC 168 over the last few weeks, there has been a genuine feeling that yeah, we all missed our dose of “Rowdy Ronda.”

“I’ve purposely withdrawn from the media to make them miss me a little bit,” she laughs. “A lot of people didn’t miss Ric Flair until he was gone, and I kind of feel like I’m in that kind of role sometimes.”

Ric Flair? Well, if you didn’t like Rousey before, you almost have to like her now because of her reference to the pro wrestling icon.

“Come on, ‘Rowdy’ is from Rowdy Roddy Piper, who’s like one of the greatest heels of all-time. I think that bad guys are always the most interesting. Everyone wanted more Joker after the Batman with Heath Ledger. They weren’t asking for more Batman.”

Rousey’s right, and if she has to play the lady with the black hat leading up to her rematch with Tate, that’s fine with her, even though she does point out that all the bad blood between the two didn’t necessarily have to happen.

“When she came on the show, I shook her hand when I saw her and I was respectful to her, but when she really started doing cheap and backhanded things to the kids on my team and was really insulting to my coaches and friends, it came to my mind that she’s just a bad person and I’m never gonna shake her hand again. Some people call that being a bad sport; I call that being consistent.”

And if you can say one thing about Rousey, she is consistent, in and out of the Octagon. In competition, she has ended all seven of her pro bouts via armbar in the first round. Outside of it, she continues to push the envelope in everything she does.

“I specifically make it like that,” she said. “I think it’s impossible to get just as motivated to reach the same goal twice. I’m a very goal-oriented person and I need high stakes and big goals to really focus and motivate myself. So I purposely make it more difficult for me every single time. I purposely paint myself into a corner and I just have a really solid constant group of people around me that have my back a hundred percent and support me through all this, and they believe that I’m capable of all of it. No one around me doubts me, and I don’t doubt myself. And with all of us, I think that there really isn’t a single goal that I could aspire to that we can’t achieve together.”

So defending a world title, making two films, and being one of the most sought after figures in the fight game is just the beginning. What’s next, President Rousey?

Yet despite her increasingly hectic schedule, Rousey hasn’t lost sight of her day job, and even though she hasn’t fought since February, that’s fine with her.

“I feel like everything really fell together in a perfect timeline,” she said of her year. “The first fight (with Carmouche) was extremely taxing, and I really feel like I shouldn’t have gone too rapid-fire. The Ultimate Fighter itself was extremely taxing as well, and the time required to wait for them to edit together the show and then for the show to air really allowed me to go take advantage of the movie opportunities that were coming my way. And by the time I was done with that, I was more than ready and super excited to start camp. I was really reinvigorated after the whole Ultimate Fighter thing and I was just ready to fight again. I think it’s the best situation to be really dying to fight again and wanting to get back in the cage instead of being in a position where you feel like you have to again.”

So how did she stay sharp over the last nine months?

“I kind of did an artificial camp while I was in The Ultimate Fighter,” she said. “I was doing a lot of sparring with the kids and I did a weight cut, and physically mimicked what my body would go through for an actual fight. And there was a lot of mental stress, so it kind of recreated that physically for me and so it wasn’t just a lot of time sitting around. Plus, with the whole movie thing, every single day I was in a pressure situation, where a lot of people were watching me and I had to perform and it really kept that ‘laser focus under a lot of pressure’ a daily habit for me, and that was helpful in its own way as well.”

And now it’s time for Tate, who Rousey submitted in March of 2012 to win the Strikeforce women’s bantamweight crown. Some would say Rousey fought the perfect fight the first time, so how does she top it? She disagrees.

“It wasn’t perfect,” said the champion. “There were things that weren’t perfect in the first fight. I think the (Sarah) Kaufman fight (in August of 2012) was a perfect fight. I aim for stuff like that. I aim for the kind of fights that even the biggest hater can’t criticize, and that’s what I’m really aiming for in this fight. I always try to have not a single wasted movement made. I had an amazing camp, I haven’t felt better and I haven’t felt sharper. I haven’t been in better shape in my whole life and I’ve been in two Olympics, so that’s really saying a lot. I’m prepared for the best version of Miesha Tate that could ever be imagined, and there’s no way that she could be prepared for me the way that I am now.”

So with another win over her rival, will we see a Ric Flair “WOOOO?”

“I was never a big celebrator after fights,” she laughs. “Even the last time with Miesha, I sat there, I didn’t even smile, I didn’t run around or anything until she got up and it was made sure that she was okay. And after I beat her this time, I’m gonna contain myself. I came from Olympic judo, and it’s just not something that you did.”