Bautista Is Ready For His Close-Up

Making his debut on short notice, Mario Bautista didn't have any time to be nervous. He's only ready.
By Thomas Gerbasi • Jan. 17, 2019

If anyone has the ability to get a fighter ready for the UFC – particularly on short notice – it’s MMA Lab boss John Crouch. So when a short-notice call turned Mario Bautista from promising up and comer to UFC fighter, Crouch just had three short sentences for his charge.

It got through to the 25-year-old, who faces Cory Sandhagen at Barclays Center in Brooklyn this Saturday. Replacing the injured John Lineker, Bautista was scheduled for an LFA bout against Jaime Hernandez on February 1st, but the call to the big show was too good an opportunity to pass up, and one he believed was coming. He just didn’t expect it in January.

“I was thinking if anybody gets hurt on that Phoenix card on February 17th, I’ll be ready,” he said. “And then the next thing you know, I’m getting a call for this card.”

Sure, a home game would be nice, especially for someone who was born in Nevada and now lives in Arizona. Does he even own a winter coat to deal with the Brooklyn freeze?

“The last winter I left Nevada, it was -26, so I’ve got a nice Carhartt I’ve been waiting to use,” he laughs.

Sounds like Bautista has been waiting for his close-up for quite a while, or at least since October, when he improved to 6-0 with a decision win over Juan Pablo Gonzalez.

“After my last fight in October, that was a good performance over a tough guy, and I kind of felt like if my manager could put me on that short list if somebody gets hurt, I want to be on it,” he said. “I don’t wish for anyone to get hurt, but it happened, and now it’s my opportunity.”

Not even the opponent comes as a surprise to Bautista, who is well aware who Colorado’s Sandhagen is. 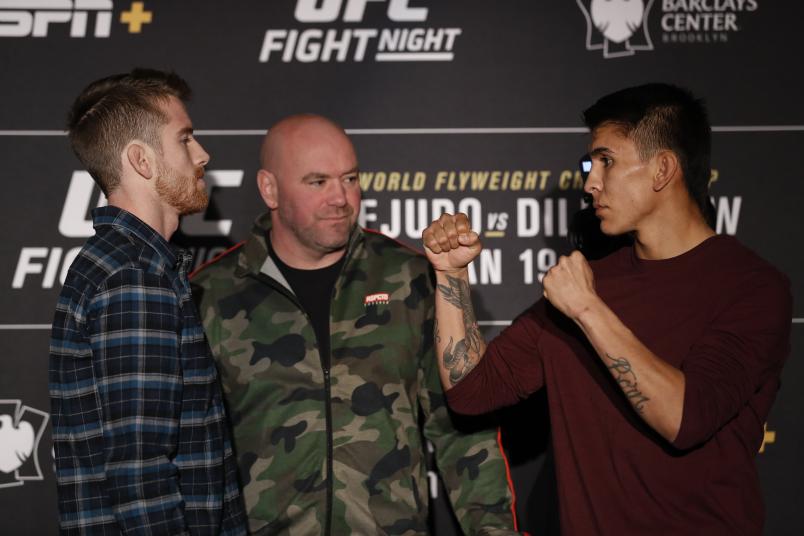 “I’ve seen Cory fight and Cory’s fought on the same card I have on a local show,” he said. “So I’ve known of Cory before, and when I saw him get into the UFC, it made me feel like I was almost right there too.”

He’s gone from “almost there” to “here,” and there’s no trace of nerves in his voice. That’s rare among UFC debutants, but Bautista has been around several UFC vets in the gym, and as far as getting overwhelmed by the enormity of an Octagon debut, having only a week to deal with it doesn’t hurt.

“I only had one week to think of it instead of six or eight weeks of thinking about the fight,” he said. “And having those guys in the gym that are in the UFC and sparring with those guys and training with them, I know I’m at that level and it just gives me more confidence. But yeah, it definitely helps jumping right in.”

That doesn’t mean he isn’t excited about it.

“They told me right before I went to bed and I had all night to think of it,” he laughs of the night he found out he was headed to the UFC. “I was not sleeping.”