In The Battle of Unbeatens, Miocic Plans on Keeping His "0" 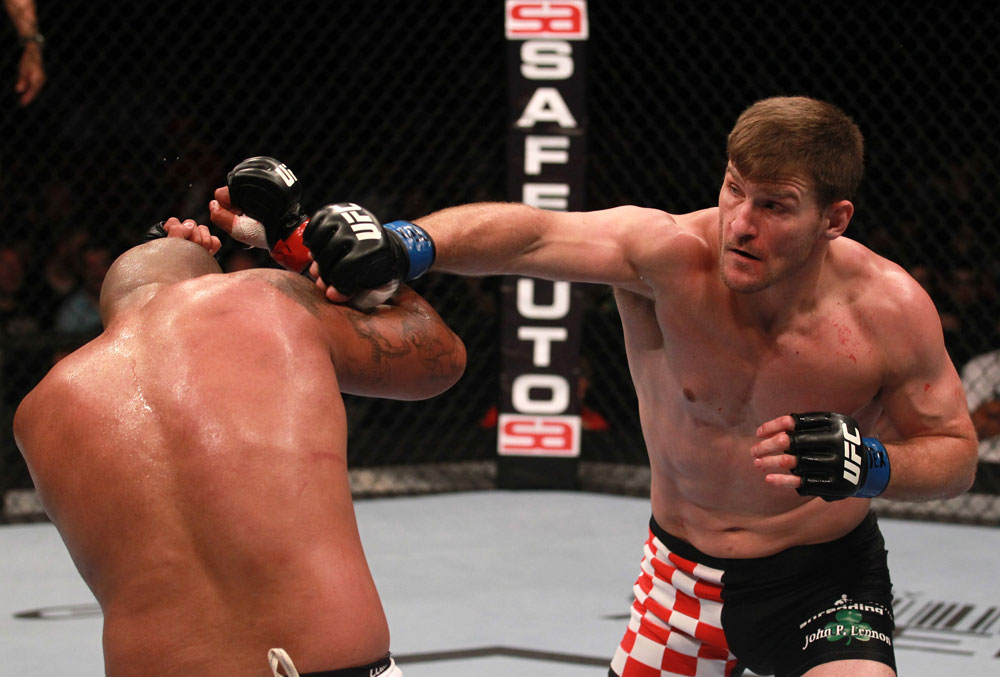 Here’s a quick quiz for the readers out there: guess which weight class produced the following averaged output per round at UFC 136? 60 strikes thrown and at least two takedowns attempted? Did you guess “heavyweight”? Probably not; maybe more like lightweight.

Yet the old days of slow, plodding heavies slothfully slugging it out inside the Octagon are long forgotten. There is a new breed of athletic heavyweights taking over that are just as ready to mix it up for three rounds as their fellow fighters in the smaller divisions. The stat line in question is from one of the most recent additions to the UFC’s next generation of gigantic gladiators: Stipe Miocic.

At 6’4” and just shy of 240 pounds, the Ohio native with the Croatian name took to the UFC cage for the very first time that Saturday night in early October against iron-chinned veteran Joey Beltran. Prior to his debut, Miocic was an undefeated 6-0 as a professional in MMA and had won a local title in his last fight with a second round submission via leg kicks. In his first matchup inside the Octagon, Miocic was thrown to the wolves against “The Mexicutioner”. At the time, Beltran was 13-5, never been stopped by strikes, only submitted once (over four years earlier), and was known for his love of a good ol’ fashioned brawl.

“When I got the call from the UFC and they said 'Joey Beltran', I was real excited because he's a tough dude,” remembers Miocic. “It was a real tough fight for my first fight, but it was awesome and I loved every minute of it. He had never been knocked out, which was all I heard, so I prepared myself for three rounds no matter what. I was nervous. I definitely got those ‘jitters’. But I got the win, so I'm happy. I didn't start out the fight the way I wanted probably because of the nerves. I felt a lot better in the third round and felt fresh. Overall, I feel good about the performance, but wish I could've done better. But I'm happy for the first time being in there.”

If that unanimous decision performance was Miocic affected by the infamous first-time Octagon jitters, then Heaven help who gets into the cage when he’s even keel. Miocic went toe-to-toe with “The Mexicutioner” for all three rounds, which is self-evident on their strike counts (180 for Miocic, 182 for Beltran). Also, Miocic showed off his ground game with several takedowns and guard passes. Besides never scrapping inside the Octagon before, Miocic had never been to a third round before with all of his previous fights ending by stoppage in the opening two rounds (five TKOs, one Sub).

“I wasn't used to it, but I caught onto it quick (laughs),” jokes Miocic about still trading punches into the final round. “In a perfect world, everyone you fight gets knocked out in the first round, but that doesn't happen when you have tough guys like Joey Beltran who keep coming. In that third round, I knew I had to keep moving, keep trying stuff, and keep trying to find a way to win - that's what I did. In that third round, I learned a lot about what I need to do and how to get better in every aspect of the game. You have to have that heart to keep going and to not stop.”

Up next for the 29-year old, a showdown with the similarly undefeated Philip De Fries on the UFC on FUEL TV card. The submission specialist from Sunderland, England, made his Octagon debut against fellow countryman Rob Broughton at UFC 138. De Fries also tasted for the first time what it’s like to win a decision and even to fight in the third round in his entry bout in the UFC. De Fries is a high ranking purple belt in BJJ under Rodrigo Cabral with all seven of his wins outside of the UFC coming by the tapping variety, with six of them coming in the first round.

“I know he’s from the UK, 6'5", and he's a grappler,” says Miocic sizing up his opponent. “Tough, big dude, strong probably, good grappler on the ground. That's his forte, so hopefully I can keep it standing. I think you always work on everything going into a fight, but depending on the guy, you work a little more on his tendencies. I have an attacking style, so I'm ready for wherever the fight goes and to push the pace there.”

In preparation for his second UFC bout, Miocic has been busy training at his home gym, StrongStyle MMA, alongside notable pros like Brian Rogers, Chris Lozano, and, UFC veteran Forrest “The Meat Cleaver” Petz. On top of that, Miocic got a surprise call from a well-known California gym to workout with one heavyweight he knows can push him like no other. “I actually went out for two weeks to train at Alliance with Phil Davis and Joey Beltran. They have a great camp out there. It's been a great camp overall for this fight.”

Besides great training and the confidence from a big win against a stalwart like Beltran, Miocic has a deceptive amount of experience for only being a pro for two years. For his ground game, Miocic is a former NCAA Division I wrestler for Cleveland State University. For his standup, Miocic is a former Golden Gloves champion, and he started training MMA back in college. As if that wasn’t enough of an athletic acumen, Miocic played collegiate baseball, which he believes helps with his overall mental toughness.

On February 15th in Omaha, Nebraska, someone’s “0” has got to go when two undefeated heavyweights clash. “I've gotten a lot better, I keep getting better, and I've gotten a lot stronger in every aspect of the game,” asserts Miocic, who wants to show UFC fans that the slugfest with Beltran was just the beginning and that De Fries needs to be ready for even more. “I don't care who you are, if you're not nervous you're not ready. I'll be nervous, but I think I'll be okay going into this fight. I'm grateful for this opportunity and, hopefully, I just keep winning.”

If he produces more stat lines like a fighter half his size, then Miocic’s spot among the top of his division will never be in question.