Battle-Tested Siler Ready for Anything

"I’ve been through every level of
fighting, I know whatever position I’m in I can get out of it, and I
think a lot of my true fans know that whatever situation I’m in, I’m
ready for it." - Steven Siler 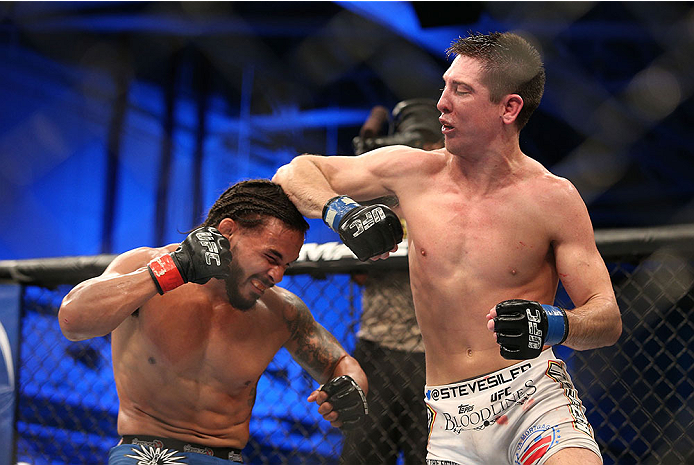 Steven Siler just wanted to be on television. So as soon as he saw mixed martial arts on a local station, he decided that was his ticket.

“I thought it looked really cool, so I said why not take up this fighting thing that I could make extra money with while I was working,” he laughs.

So he did, making his pro debut in April of 2005 with a split decision win over Samuel Hewitt. And Siler kept fighting, losing his next bout against Olly Bradstreet via first-round TKO. He would fight Bradstreet three more times, ending up with a 1-3 record (he did win the last one though). Kawaika Kauwe got the call three times, with Siler again getting the short end of things (1-2) but winning the last fight.

Most would call it the education of a mixed martial artist, if Siler was getting educated. But the Utah product was simply fighting on sheer guts alone. He had no martial arts background, no high school or college wrestling to fall back on. He just scrapped. He didn’t even train until his friends sat him down after his last loss to Bradstreet in 2007.

“I didn’t know what fighting was,” he admits. “I fought 12 times before setting foot inside of a gym. I didn’t even know what to do after someone took me down. Finally after the 12th one, my buddies told me I needed to start training and see what would happen if I started taking it serious. I had a lot of heart, and I wanted to see what would happen if I got the skill behind it.”

As he puts it now, “it actually worked out.” Once Siler started training like a professional fighter, he was a quick study, winning 13 of his next 15 bouts, with the only losses coming against Chad Mendes and Cole Escovedo. For any other prospect, a 13-2 run would be something to brag about and a precursor to a call from a major promoter. For Siler, the 5-7 record that preceded it was a cautionary tale. All of a sudden, the gung-ho spirit of those early days was replaced by some feelings of regret.

“Back in the WEC days I felt like I was always close,” he said. “I went on a win streak at one point, and I felt like, yeah, I’ve done so much that I should be in the WEC already, and they’re not calling me because they see my record and it doesn’t look very good.”

Cream does rise to the top though, and in 2011, Siler got recognized by the producers of The Ultimate Fighter, who upset Micah Miller – ironically a WEC vet – to get into the house for the reality show’s 14th season. Siler would lose his first fight in the house to eventual winner Diego Brandao, but he did get a shot to compete for a contract at the show’s finale and he made the most of it, defeating Josh Clopton.

Seven more UFC fights have followed for the 27-year-old, who currently sits at 5-3 in the promotion. It’s still too close for comfort when it comes to the .500 mark, but his wins over Cole Miller (Micah’s brother), Joey Gambino, and Mike Brown have proven him to be a legitimate featherweight prospect, and not just the young man many believe looks like anything but a professional prizefighter.

“It’s definitely an easy angle to go to,” he laughs. So what’s the solution – grow a beard?

“I tried growing a beard,” he said. “I had that little thing growing on my chin and that took years. Nothing’s growing on my face, that’s for sure.”

Perhaps that gives him an advantage on fight night, with tattooed, grizzly opponents believing he’s an easy mark and finding out otherwise. Nah, not at this point. At this juncture, heading into a Saturday bout against Noad Lahat in San Jose, Siler is well-known by his peers and the fans. So with that hurdle cleared, now he has to go about the business of cleaning up that pesky two-fight losing streak he’s on, though when you talk to “Super” Steven, he’s looking at his 77-second TKO defeat against Rony Jason in March to be a loss with an asterisk next to it.

“I know I should have won that fight,” said Siler, who some believe was the victim of a quick hook from referee Wernei Cardoso after he was dropped to the canvas by the Brazilian.  “Everyone knows the ref stepped in early. But it was my fault for getting caught. I was telegraphing that hook and I obviously saw him timing it, and he countered and rocked me, but I know I didn’t really lose that fight. That made it a little easier to get over, but it doesn’t make it to where I don’t want to get it back.”

The attitude is a good one, as he’s not dwelling on the setback, but the reality is that on his record, he lost to Jason and Dennis Bermudez in back-to-back fights. A third straight loss won’t be good, and he is well aware of that fact.

“I know that this is a must win, but I feel like I’m so much better than Lahat in every way and if I lose that means I’m not going to get to the top 15 and top 10, where I belong,” he said. “I feel like that’s where I deserve to be, so if I don’t win, it proves that maybe I’m not ready or not at that level, and I need to prove to everyone that I am at that level.”

In the 7-1 Lahat, he’s facing a fighter looking to bounce back from the first loss of his pro career in his UFC debut against Godofredo Pepey in March, but the veteran Siler isn’t too concerned about what the decorated groundfighter is bringing to the Octagon on Saturday.

“I’m not really worried about what he does,” he said. “There’s nothing he does better than me. He may be a ground guy, but I have so many submission victories myself and I love being on the ground, so I feel like I’m at home when I’m on the ground. So I’m not worried about that. The guy has eight fights. I have eight UFC fights. He’s not ready to be in the cage with someone like me; he’s just not at that level yet, and he’ll find that out pretty quickly. They just probably see a 15-year-old kid trying to fight in the cage, but the experience is there. I’m going on 10 years of fighting now. I’ve been through every level of fighting, I know whatever position I’m in I can get out of it, and I think a lot of my true fans know that whatever situation I’m in, I’m ready for it.”

“It’s just experience now,” said Siler. “I’m in the UFC now, and the only win-loss record I look at is the UFC one.”