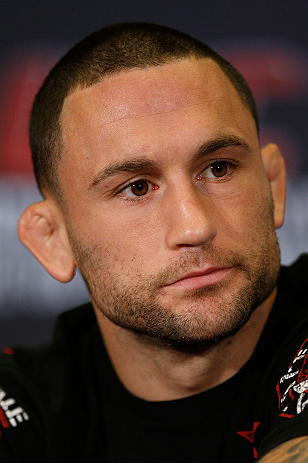 There is no rest for a professional fighter. Whether it’s a trip back to the gym, family time, or media obligations, elite UFC competitors have to become skilled in the art of time management. And in the case of former lightweight champion and current featherweight contender Frankie Edgar, it’s also time to get his batting stance and swing back in order.

“I haven’t played baseball in a long time, since I was 12 years old,” laughed Edgar, who will compete in the 8th Annual Celebrity Softball Challenge Friday at MCU PARK in Coney Island, New York. “I might have to sharpen up the skills this week and start training.”

When asked about being included in such a group, Edgar says, “I’m gonna be the star struck one. It’s a celebrity softball game, but I don’t really call myself much of a celebrity. It’s cool though. It should be fun.”

The 31-year-old from Toms River certainly earned a little fun time, as he’s coming off a UFC 162 win over Charles Oliveira last Saturday night. It was a typical hard-fought victory for “The Answer,” but he has no problem digging deep to get his hand raised.

“Sometimes things are better the hard way,” he said. “It makes it that much sweeter when it goes your way. The hard way makes you a little tougher too.”

And Edgar had to show off all that toughness against Brazil’s Oliveira, whose own stock rose in defeat for his aggressive and impressive effort against the former world champ.

“He was game and definitely in that fight to win,” said Edgar. “He showed a lot of toughness. He’s also the tallest guy I fought. I’ve fought bigger guys, but he’s by far the tallest and the rangiest. That was a challenge in itself and I think I did a good job there, so it’s good to know that I can adapt and find a way to win against all different types of styles.”

The win put Edgar back in the title picture after three heartbreakingly close losses to Benson Henderson (twice) and Jose Aldo. It also made the long flight home to New Jersey from Las Vegas a lot easier to deal with.

“It’s good, I see things clearer,” he laughs. “I hate losing so bad, and especially the way I did when it’s so close, you rack your brain and think about what you could have done different, and you get down on yourself. But with a win, it’s a smile on your face all the way home.”

Tonight, he’ll be swinging for the fences again, only this time without his four ounce gloves on, and for a good cause as well, as net proceeds from general admission ticket sales will benefit Tuck's R.U.S.H. for Literacy and the ongoing Hurricane Sandy Relief Efforts.

“It’s definitely a perk of the job and you’ve got to try and take advantage of that,” said Edgar of his charity work. “It’s really good to help people that need it.”

Net proceeds from general admission ticket sales will benefit Tuck's R.U.S.H. for Literacy and the ongoing Hurricane Sandy Relief Efforts.  Join us for a memorable day to celebrate with friends and family. Collectible gear available at CSweat.com. Limited Edition Under Armour replica jerseys to be sold on-site.

A 30-minute highlights show will be presented on SNY on Saturday, July 20th at 5:00 p.m. Check your local listings.  Live video reports throughout the game on GTV.