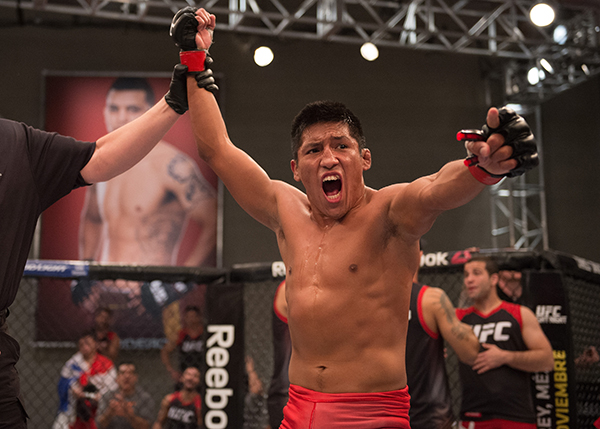 Enrique Barzola is the first native of Peru to step into the Octagon since Tony DeSouza, but don’t call him a pioneer of mixed martial arts in his country.

“I am not a pioneer in this sport since there are many strong Peruvian fighters such as Ivan Iberico, my teacher,” he said. “But I do feel like a role model for fighters who want to achieve this objective and show them that it’s not impossible; that with dedication, sacrifice, consistency and good faith, you can get what you want.”

Lima’s Barzola is one win away from what he wants – a UFC contract – and his chance to get that victory is on Saturday in Monterrey, Mexico, where he faces Horacio Gutierrez in the Ultimate Fighter Latin America 2 lightweight final. It’s a clash of teammates from the reality series, but neither fighter is going to let their affiliation with Team Escudero affect what happens in the Octagon this weekend.

“The truth is, I am calm,” Barzola said. “I know he's out to win and I'm going out to smash. We both want victory, but whoever wants it more will get it, and that’s me.”

A three-year pro, Barzola has a well-rounded style that is reflected in him earning five of his 11 victories by knockout and four by submission. In The Ultimate Fighter competition, he kept that unpredictability streak going with a unanimous decision win over Jonathan Ortega in the quarterfinals that required a “Sudden Victory” round and a stoppage due to strikes of Cesar Arzamendia in the semifinals. That ability to adapt served him well during his six-week stay in Las Vegas, one he would do again in a heartbeat.

“The experience was great,” he said. “When I lived in the house, I met several Latin American fighters from different cultures and with different styles of fighting, and I was also happy to have represented my country and demonstrate that Peruvians are ready to bring great things. Of course, the hardest part for me was being away from my country, my team, my family and my wife who loves me very much. But I would love to participate again in TUF.”

If he wins on Saturday, he won’t need to, as he’ll be a member of the toughest roster in the sport and ready to drop ten pounds south to his usual weight class at 145 pounds. That’s a lot of life changing for one 15-minute fight.

“So many changes,” he said when asked how winning TUF would affect him. “Not just with economic issues, but I can help the fighters on my team who have helped me fulfill my dream become UFC fighters.”

Sounds like Peru could be the next South American hotbed for MMA. The 26-year-old Barzola is confident that it already is.

“The Peruvian fighters are on the same level as the Mexicans, Brazilians and Americans, and there are many people that practice MMA in my country and that are UFC fanatics, especially since there is a Peruvian representing them.”