Bart Palaszewski - Willing to Go Where You Won't

"I fought my way up, I’ve seen it all pretty much, and I’m here to stay.” - Bart Palaszewski 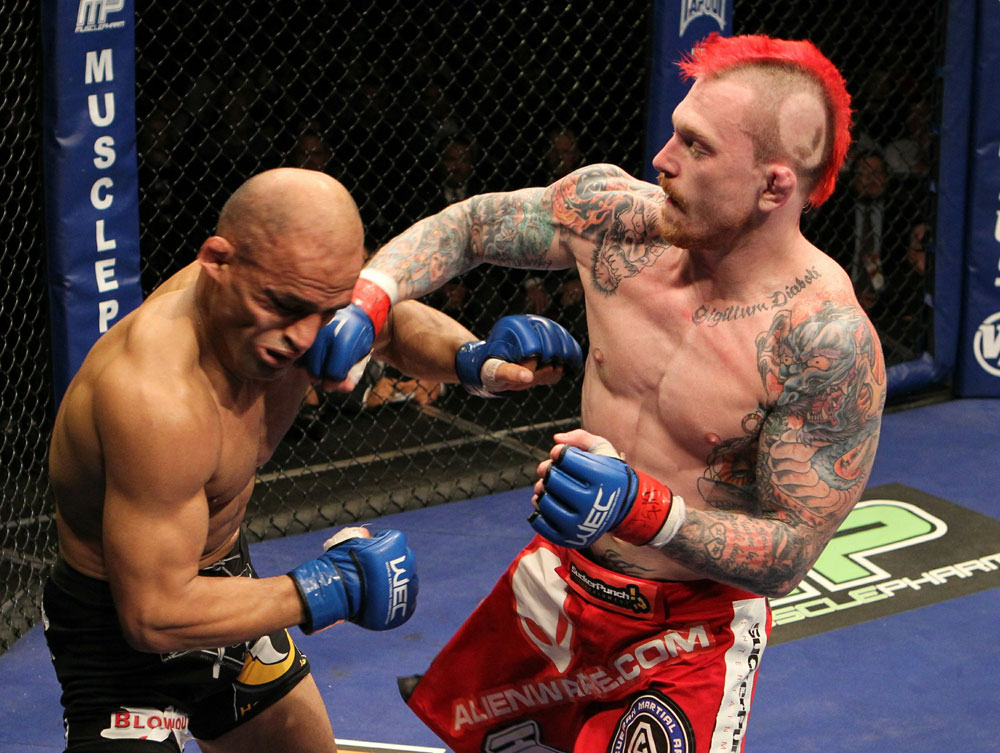 It takes more than the stereotypical mean mug and tattoos to separate the fighters from the civilians these days. A lot more. But for starters, a simple conversation about what was probably (or at least should have been) the most physically painful day of a person’s life should give you a good indication of where someone stands on the fighter / civilian line.

Take Warsaw-born Illinois resident Bart Palaszewski for example, and ask him about his April 2005 bout with Andrew Chappelle. You can almost hear the joy in his voice when he responds.

“Oh man, that was a brawl,” said Palaszewski, who defeated Chappelle via three round unanimous decision. Simple enough. We’re established that he’s a mixed martial artist. But is he a fighter? We’ll let Mr. Palaszewski continue with his recollection of the fight.

“It was the one and only SuperBrawl that happened on the mainland, outside Hawaii, and it was just a brawl, I loved it,” he said. “It was one of my favorite fights and it showed me that I have heart because I had the blown out elbow and the broken hand and still came out with the win. I was beat up for a while after that fight.”

Case closed. This one’s a fighter.

So where does this kind of heart and determination to carry on through serious injuries and not only compete, but win?

“Good cornermen,” he laughs, recalling how he returned to his corner after the first round and told his coaches “I’m pretty sure my elbow’s blown out.”

“Stop being a girl, get out there,” they responded.

He did, but in that second stanza, “I broke my right thumb doing the Fedor (Emelianenko) punch / jump into the guard like an idiot. (Laughs) And I’m pretty sure he broke his hand the same exact way.”

At the end of the round he presented his hand to his corner, describing the thumb simply as “Sideways, backwards.”

Palaszewski laughs about it now.

“As much as it’s not a team sport, your corner’s gotta be there for you to tell you a little white lie.”

Now Palaszewski is not recommending this kind of courage for everyone, and he doesn’t expect fighters to always fight on after suffering an injury in the Octagon. In other words, don’t try this at home. But it is his way of doing things, and he’s sticking to it.

“You’re in a fight,” he said. “You’re not playing chess. You might get a black eye, you might get cut or get your nose broke or an arm broke. Finish it. Yeah, I understand if your bone’s sticking out or a doctor stops it or you literally can’t continue, but if you’re like ‘okay, it hurts, bad, but I’m still here,’ screw it man, give it your all.”

That philosophy has carried the 28 year old through nearly 50 pro fights (34-14) since he started off his career 0-4 in 2002-03. He’s been in with the likes of JZ Cavalcante, Cole Escovedo, Clay Guida, Steve Bruno, Ivan Menjivar, Chris Horodecki, John Gunderson, and Jim Miller, and that was before he ran off seven fights in the WEC, going 4-3 with a win over Anthony Pettis. And now, finally, he will be making his UFC debut this weekend with a UFC 137 bout against Tyson Griffin.

“It’s definitely a dream come true,” said Palaszewski. “Everybody wants to be in the UFC. I’ve fought in different organizations all over the world and I seasoned myself, and I wouldn’t take it back. I loved every minute of it. I loved working with the WEC, the IFL, and all the little shows. Obviously without them I wouldn’t be here now. But I’m seasoned now, I’m ready to go and I’m right where I want to be.”

And the strangest part of the whole thing is that despite paying his dues for nearly a decade while seeing less experienced fighters get called to the big show, “Bartimus” has no regrets, no sour grapes about things taking so long.

“In a way I’m glad I went through the School of Hard Knocks,” he said. “I wouldn’t change anything for the world. I’ve got quite a few losses, but I’ve got a crap load of wins as well, and I love it. I think it’s the right timing for me. I took small steps, I didn’t rush into it, and I think this way, the longevity of my stay in the UFC will be much better. I fought my way up, I’ve seen it all pretty much, and I’m here to stay.”

One of the last imports from the WEC merge to make the move to the Octagon, Palaszewski saw his debut delayed even further earlier this year when a UFC 130 bout against Cody McKenzie was scrapped, replaced by a bout with Gleison Tibau, and then scrapped again for good when Palaszewski was forced to withdraw. But he hasn’t let his idle time go to waste, as the former lightweight finally found the time to make the cut to the 145-pound weight class.

“It (losing the UFC 130 bout) was kind of frustrating, but at the same time, I’m kinda happy it happened and that’s why I’m making the 145 cut,” he said. “I always wanted to do it, but I never really had a chance because they kept us pretty busy (in the WEC). So I’m trying to make a positive out of what happened.”

Only a fighter would think cutting to a new weight class 10 pounds south was a positive thing. But then again, this is the same guy who can’t wait to throw hands with longtime UFC standout Tyson Griffin.

“He’s a good wrestler who likes to throw, so it kinda works out for me,” said Palaszewski. “But a lot of guys throw down with me until they get hit, so we’ll see how he reacts after the first punch lands. But he is a good wrestler so I’ll have to be aware of that. I’m not really worried about his striking. I know he likes to throw, but there’s a difference between throwing and actually knowing how to punch and kick. So I’m not really worried about that. The only thing I’m cautious about is his wrestling.”

And despite his tendency to go hands up, chin down and start brawling once a couple shots start landing, Palaszewski is a jiu-jitsu black belt, he’s done neglecting his ground game, and he’s promising that the fighter who shows up for his UFC debut in Las Vegas is going to be a lot different than people remember him.

“I think the last two, three years, I’ve improved the most,” he said. “When I started fighting, I was just a kid, and I was going on pure technique and pure insanity. I was just out there fighting and loving the sport. Now I’ve become a mixed martial artist. I’ve sharpened my boxing, I’m really working on my Thai Boxing, I’ve been wrestling my ass off and I want that to be phenomenal as well. I’m a Brazilian Jiu-Jitsu black belt and I’ve been spending a lot more time on the mat and I’m finally getting my adult strength. (Laughs) I’m a late bloomer. I know I haven’t reached my peak and reached the level I want to be at, and I think the next couple years are really gonna unfold a lot for me and I’m going straight to the top.”

Broken bones and all.