"I think a win over Hioki will definitely propel me to being in the
running (for a title shot), but I’m not looking past Hioki. He’s a tough
dude, obviously; he’s a top contender." - Bart Palaszewski 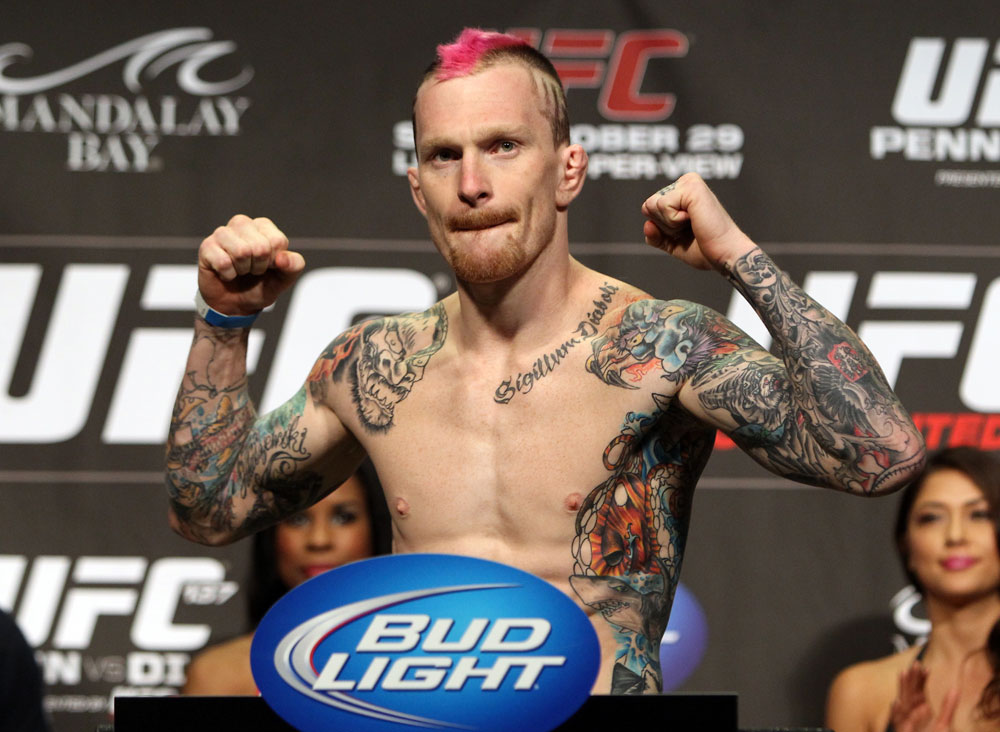 Close your eyes and try to picture a fighter with more than 45 fights under their belt, a guy who has been competing for more than a decade.

What do you see?

Chances are you see a battle-hardened veteran, a forty-something who has been around the block a time or two. You most likely picture a faded star, someone left trading on his name and accomplishments that came a long time ago, fighting on the regional circuit in front of a couple thousand fans at best.

What you probably don’t picture is a 28-year-old featherweight contender with a crooked, hot pink Mohawk and a mischievous grin preparing to make his second trip into the Octagon next weekend at the famed Saitama Super Arena, where thousands of Japanese fans will watch him compete.

The vast amount of experience he has accumulated at a relatively young age isn’t the only facet of the long-time Team Curran trainee that makes him different from most of his peers either.

Ask Palaszewski a question and he’ll give you an honest answer — no clichés, no filters, and no sugarcoating. Regardless of the subject, “Bartimus” gives it to you straight, a departure from the “stock answers” approach most athletes employ these days.

“I was always told you’re as good as your last fight,” began the 35-14 featherweight who has fought in an alphabet soup of organization over his ten-year career when asked about his upcoming opponent, Hatsu Hioki.

“That’s what Monte Cox always told me over the years, and Monte knows his stuff. If his last fight impressed anyone, they have got to be a hardcore Hatsu Hioki fan. I mean, personally, I think he lost the fight, and I hope he performs the same way against me.”

Considered one of the top 145-pound fighters in the world, Hioki made his UFC debut in October at UFC 137, earning a split decision victory over George Roop that many believe should have went the other way. Explanations for his poor performance started being offered as soon as scorecards were read, with the ubiquitous Octagon jitters leading the way.

Earlier in the night, Palaszewski made his first appearance in the Octagon as well, dropping to featherweight for the first time. He knocked out UFC veteran Tyson Griffin just past the halfway mark of the opening round, earning Knockout of the Night honors in the process.

He says Hioki wasn’t the only one suffering from Octagon jitters that night, which is precisely why he’s not buying it as an excuse for his poor performance.

“I don’t care if I have 10 fights in the UFC — it’s still a UFC fight. Every fight is going to be against a top opponent in a big, big show, so the Octagon jitters will never go away, bottom line.

“I beat Tyson, and now I went from a guy that was Top 10, now I’m stepping up again and fighting a guy who’s Top 5. Should I have jitters again? It’s constantly going to be like that. Ready-made excuse maybe?”

Palaszewski isn’t really concerned about the explanation — he’s too busy preparing for the biggest test and most important fight of his career.

He knows that regardless of his tepid performance against Roop, Hioki is a talented competitor who earned his place in the upper echelon of the featherweight division by beating some of the best fighters the 145-pound ranks have to offer. While he wasn’t impressed with what he saw four months ago at the Mandalay Bay, Palaszewski knows he’s in for a challenge.

That’s precisely why he asked for this fight in the first place.

“Hioki’s actually a fight we asked for. Before my fights, I always make up my list with my coaches and my management — guys we’re going to go after in case I lose or if I win a fight,” explained the former member of the IFL’s Quad City Silverbacks. “We got to turn the winning list into the UFC last time, and Hioki was at the top of the list.

“I’m extremely excited that the UFC granted me my wish, and they think I’m worthy of fighting a top contender like Hioki. But like I said, it was a fight that I wanted; it wasn’t a fight that was luck of the draw or the UFC throwing the fight at me. I think I match up with him really well, and it’s going to be a good fight.

“I think a win over Hioki will definitely propel me to being in the running (for a title shot), but I’m not looking past Hioki. He’s a tough dude, obviously; he’s a top contender. He’s top 5 in the world, he’s got an amazing record, he’s got everything backing him up, so I’m just looking at him, concentrating on him 100 percent.”

Featherweight champion Jose Aldo is blazing a path of destruction through the division. Having already collected victories over Mark Hominick, Kenny Florian, and the previously unbeaten Chad Mendes, it’s conceivable that the winner of this fight could be the next man to challenge the 145-pound dynamo for divisional supremacy.

In typical fashion, the former WEC lightweight contender gives an earnest assessment of his place in the pecking order, before trailing off into what can only be described as “Bart being Bart.”

“Obviously, if the UFC says `Go’ I’m one of those guys that — if the UFC says, `Jump!’ I don’t even ask, `How high?’ I just start jumping. If it’s not good enough, I keep trying harder and harder to jump higher. If they tell me, `You’re up against Jose’ I’m going to do it, but if not, I’m focused on the next step.

“But the UFC hasn’t said anything to me. There’s a lot of chatter online, but that doesn’t mean squat unless it comes out of the UFC’s mouth, which doesn’t make sense because the UFC doesn’t have a mouth.”

As the laughter subsides, the reflective and serious side of Palaszewski returns as the conversation shifts to the strange odyssey that has been his professional career, which started with a loss to former WEC champ Cole Escovedo in 2002.

“Shoot — I was in high school when I started fighting. I was a young kid, and I was doing it for fun. I mean, I still do it for fun, but it just happens that it’s my job too; it’s a hobby and a job all at once.

“I take it seriously from that point of view because it is my job, but it’s that much easier to get up in the morning because it’s something that I love to do. It’s not like I have to go answer to some #$$%^&^ at work, telling me what to do. I’m extremely happy, and I’m very… I don’t even know… I’m ecstatic about it. I get to do in life what I love to do.”

Palaszewski hit a rough patch a few years ago when he was putting more energy into what he calls “The Fighter Lifestyle” — partying, staying out late, and sleeping all day. That stopped prior to his fight with Zack Micklewright at WEC 50. Now instead of spending his mornings recovering from the previous night’s activities, he hangs out with his daughter.

The always honest Palaszewski knows it’s no coincidence he’s found success and climb to the brink of contention in the featherweight division now that he’s found what works best for himself outside of the cage.

“At this point, I’ve just grown up I think. I’ve seen a sports psychologist, and that’s the thing: I always had performance anxiety because I was just a kid, man. I was kid fighting in a man’s world. At this point, I’m growing up; I know what needs to be done.”

Palaszewski points to his performance against Griffin in October for proof that the changes he’s made are paying dividends, and says things are right on schedule for his showdown with Hioki in Saitama this coming weekend.

“I was so light heading out to Vegas, and I was so strict, my mind was set on making ’45. I didn’t do a practice cut or anything; I signed the fight for ’45, and that was it. I figured out a diet plan, and the pounds were coming off just right that we didn’t have to adjust anything. This weight cut has been going well — I’m actually lighter than I was at this point last time, so I’m happy.

“It’s cool that Saitama has held so many historic fights in MMA; it’s going to be huge. It’s a great arena, and it’s definitely a different experience. Japanese fans compared to US fans are two different worlds — you’re going to have 30,000-plus people there and you’re going to be able to hear a pin drop. I’m stepping into enemy territory, so I guess I’ve got something even more to prove now.”

When asked for his thoughts on how the fight with Hioki would play out, he answered the same way he does with every question — honestly, with a dash of “Bart being Bart” for flavor.

“I’m going to be in Beast Mode, homie! I’m gonna kick some butt!”