"I’m a realist – I’m not going to be one of those guys who is going
back-and-forth at 35-years-old, trying to get big fights. When my time
is up, it’s going to be up." - Bart Palaszewski 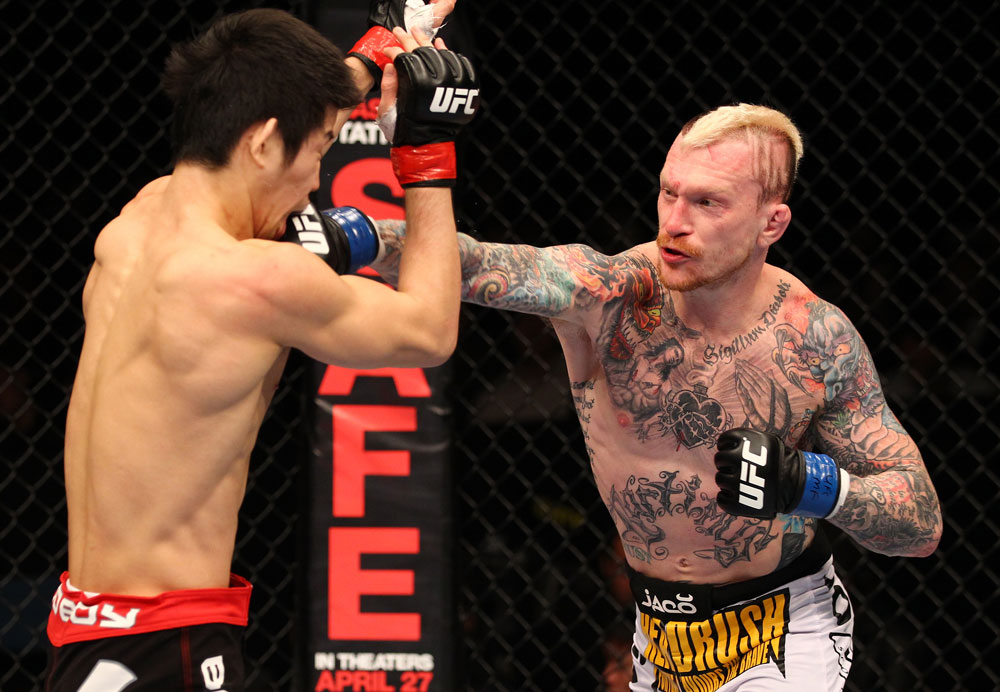 Ten years from now, you’re not going to see Bart Palaszewski’s picture on a fight poster for some random regional event in Who Knows Where, Indiana with the words “Former UFC Fighter” serving as his chief descriptor and the show’s biggest selling point.

Despite being nine months shy of his 30th birthday and on the fringes of contention in the featherweight division, the 29-year-old veteran has already started thinking about the end of his career, and what comes next.

Or, more correctly, what won’t come next.

“I think once I’m done in the UFC, I’m pretty much going to be done,” offers the always candid featherweight contender. “I love this sport, but fighting back into the UFC is going to be ridiculously hard, and I don’t want to spend two years in the trenches again. I’ve been there many, many, many times. I’ve been around the block once or twice with MMA. Obviously, I’ve never won a belt – I’ve got a sweet ring from the IFL (laughs) – but when time’s up, time’s up. I’m going to do my best my next few fights, these next couple years, and when the UFC says goodbye to me, I think I’m going to say bye to the sport.

“I’m not giving up,” Palaszewski says seriously, making sure it’s clear that knowing the end is near is not the same thing as packing it in early.

“Don’t get me wrong: I’m going to bust my ass every single day of every single camp, but you know, sometimes you come out on the bottom. Nobody comes away from this sport undefeated. If you’re in it for a few years – or as long as I have been – you’re going to have some losses, and sometimes you string a few losses together and get the pink slip in the locker.”

Palaszewski knows all about the highs and lows of being a professional fighter. He began his career more than a decade ago at age 19, starting with a loss to future WEC featherweight champion Cole Escovedo. Three more defeats followed before he got his first win.

Since then, “Bartimus” has battled relative unknowns, established veterans, and everyone in between, fighting for organizations you’ve never heard of before, and ones you’ll never hear from again. Over the last four years, he’s amassed a 5-4 record between the WEC and UFC, including being one of two men to defeat Anthony Pettis.

Having watched the sport change and knowing that the end of the road is on the horizon, the vastly experienced Palaszewski opted to make some changes in order to give himself the best chance to make the most of the final stretch of his fighting career.

When he steps onto the stage Thursday to weigh-in for his bout with Diego Nunes on the preliminary card of Friday’s UFC on FX event in Minneapolis, Minnesota, Palaszewski will have a new team of coaches in his corner. After spending his entire career working with Jeff Curran, the 29-year-old left Wonder Lake, Illinois for Albuquerque, New Mexico to work with Team Jackson-Winkeljohn. It wasn’t a decision that came easily to the fiercely loyal featherweight, but it was one he believed was necessary.

“Change is hard on everybody. I don’t know if it was something I wanted, but it was definitely necessary,” he says about the move. “I was in one gym for nearly 13 years, and I wanted to experience different places. I’d never gone out and trained different places. I’m at the tail end of my career; I’m still young, but I’ve been fighting for 12 years, and I’ve got a lot of fights. I want to move on to the next chapter of my life before I turn 40. I wanted to check out different gyms, get a new gym, and really give it a hard run, and get a few good fights under my belt before I say goodbye.

“It was awkward in the beginning,” laughs Palaszewski. “I came down here a few times before I started camp just to kind of get to know everybody, and how things are run. When camp started, I was fine, but the beginning was awkward: new place, new teammates, new everything, and just getting used to everything. But it’s been great.

“The big thing is the altitude, man – it kicked my ass for two weeks. I know that going back down to sea level, I know I’m going to be on-point with conditioning. There are a lot of new training partners, a lot of great coaches; I love it. It’s been a great experience.”

With 50 professional fights under his belt and a decade spent honing his skills, is it possible for an old dog to still learn new tricks?

“Yeah – but I’m not an old dog; I just was learning tricks when I was very young, that’s all,” Palaszewski clarifies. “I’m still learning, I’m still progressing, but it’s a different sport. These guys these days are just frickin’ awesome. The sport has evolved tremendously, to the point that it’s hard to keep up with it.

“I’m going to bust my ass and do my best, but I’m a realist – I’m not going to be one of those guys who is going back-and-forth at 35-years-old, trying to get big fights. When my time is up, it’s going to be up.”

Everyone has their own reasons for putting themselves through the daily grind that comes with being a professional fighter.

For some, it’s the belief that one day, Dana White will be wrapping a shiny UFC belt around their waist as Bruce Buffer proclaims them champion amidst a thunderous ovation. Others need the competition or the camaraderie that comes from sweating out hours on the mats side-by-side with the same group of people, day in, and day out.

Palaszewski does it for 10 seconds.

“Nick Diaz said it perfectly – it’s a love/hate relationship. I hate it. Getting up in the morning? Today I had two egg whites, and I’m crabby and I’m tired and I’m hungry, but getting through a hard workout, and achieving something like that just – it’s that love/hate.

“It’s that (feeling after a good workout) and the 10 seconds after you win a fight. You get your arm raised, you get high fives from the crowd on the way back to the locker room, and then it’s on to the next guy, and you’re forgotten, so you’ve got to be willing to bust your ass for that 10 seconds of glory that you get.”