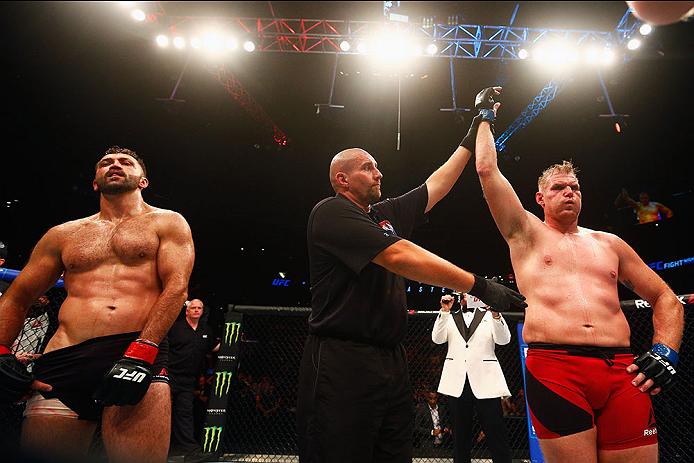 The long awaited clash between former UFC heavyweight champions Josh Barnett and Andrei Arlovski delivered on its promise at Barclaycard Arena in Hamburg on Saturday, with the two titans battling back and forth until Barnett pulled out the win via third-round submission.

Arlovski and Barnett traded knockout blows as the fight began, each fighter getting rocked before the two clinched against the fence, Arlovski ending up bloodied on the forehead. Midway through the round, Arlovski tripped Barnett to the mat and began to fire off ground strikes. After a brief stalemate, referee Leon Roberts restarted the action, and again Arlovski drilled and rattled Barnett, forcing “The Warmaster” to bull his foe into the fence once more.

The action stalled in the clinch early in round two, prompting Roberts to restart the action. A heated striking exchange followed before another clinch. And while Arlovski was able to get another trip to the mat, Barnett reversed and took the mount with under two minutes left. In the final minute, Barnett turned it up with his ground strikes but Arlovski was able to survive.

Arlovski made a run in round three, rocking Barnett with strikes and putting him in deep trouble, but as the Californian recovered from an inadvertent eye poke, he locked Arlovski up and got him back to the canvas. This time, Barnett didn’t let Arlovski off the hook, as he took his back and sunk in a rear naked choke that forced the tap out at 2:53 of round three.