Barnett Reflects on the Rise of WMMA

"It’s great to see that there are women alongside the men, because at the end of the day, it’s just great fights and great fighters." - Josh Barnett 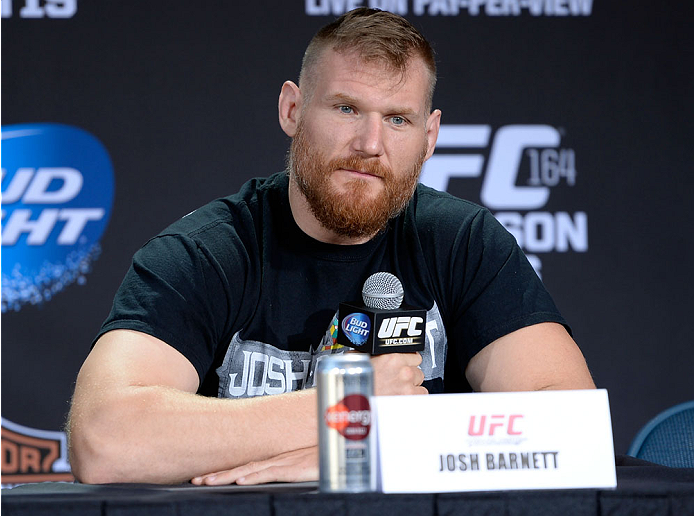 LAS VEGAS, December 26 – Long before the UFC brought women’s MMA into the Octagon, and even longer before it was “cool” to be a fan of the female side of the sport, Josh Barnett was there on the frontlines, working with the likes of Shayna Baszler, Megumi Fujii, and Ginelle Marquez.

In the process, the former UFC heavyweight champion and PRIDE and Strikeforce standout became one of the first top-level mixed martial artists to not just take an interest in WMMA, but to treat the ladies as what they were: fighters and equals.

“I didn’t look at them as women or men or anything like that,” said Barnett Thursday during the UFC 168 pre-fight press conference at the MGM Grand. “I just saw tremendous people with tremendous athletic ability and talent, and I knew that I could help them achieve something that they wouldn’t be able to do just on their own. It’s the same with the few men that I work with. Basically, it’s to give back to all the people who have put into me all the tradition and the knowledge. The knowledge doesn’t just come from that one individual. There were people who trained them and people who trained them, and when you think about it, that’s hundreds of years that culminated in one person. And so I feel that it’s a responsibility for me to take that knowledge and keep it alive and keep the fire burning.”

On Thursday, Barnett – who faces fellow heavyweight contender Travis Browne in a UFC 168 main card matchup – shared the dais not just with his opponent and main eventers Anderson Silva and Chris Weidman, but with the ladies who make up this weekend’s co-main event, UFC women’s bantamweight champion Ronda Rousey and challenger Miesha Tate. It’s a big deal for WMMA, which saw several milestones in 2013, including the introduction of women into the UFC, Rousey and Liz Carmouche headlining UFC 157 in February, Rousey and Tate coaching The Ultimate Fighter 18, and getting the co-main event slot on the biggest card of the year. To some, this may have come as a surprise, but not to Barnett.

“As far as where women’s MMA is at this point, I felt that if it’s exciting and if there’s interest, there will always be the opportunity,” he said. “We had seen it before with Gina Carano in EliteXC. She was able to do things that were outside of fighting, which helps a lot. Fighting is a pretty popular sport at this point, but there are still a lot of other areas where there are people who aren’t familiar with our sport and aren’t familiar with the athletes, and if they get just the smallest inclination of this person being interesting to them, no matter how they’ve seen them, and they’re following that person back over, that’s excellent.”

Simply put, as far as he’s concerned, gender doesn’t dictate whether a fight is compelling or not.

“It’s great to see that there are women alongside the men, because at the end of the day, it’s just great fights and great fighters.”