After suffering back-to-back losses, Edson Barboza decided to switch camps and move to Florida, in search of a fresh start. He'll get that opportunity Saturday against Dan Hooker.
By E. Spencer Kyte • Dec. 11, 2018

As icy December temperatures sweep through New Jersey, perennial lightweight contender Edson Barboza laughs as he talks about open doors, sunny skies and roaming around the house without a shirt now that he’s once again living in South Florida.

“Here is perfect right now,” says Barboza, who traded Toms River, New Jersey and working with Mark Henry, Ricardo Almeida and the Iron Army for Coconut Creek and a fresh start working with the crew at American Top Team during the summer.

There was nothing acrimonious about his split with his former team, nor was it a desperation play after having lost consecutive fights for the first time in his career. Instead, it was a decision centered on family, one that will be growing in numbers in 2019.

“The most important thing is that I see my family happy,” explained Barboza, who returns to action this weekend against surging New Zealander Dan Hooker in the co-main event of Saturday’s UFC on FOX broadcast in Milwaukee. “My wife is pregnant — she’s 26 weeks — and my family was very, very happy (about the move) and that is most important for me.”

It also doesn’t hurt to have a world-class facility and elite team of coaches and training partners right down the block to work with either.

“I’m very happy to be here in Florida and very happy to be at ATT,” continued the 32-year-old Brazilian, who originally set up shop in Jupiter, Florida when he first moved to the United States prior to relocating to New Jersey. “Everything is new and different and I enjoy it.

“I live five minutes from the gym and I’m there full-time, training a lot. I love all those coaches and everybody. We’re training a lot and everybody is helping me a lot. It makes me very happy because I feel better and better every single day.”

A fixture in the Top 10, Barboza has been considered one of the top lightweights in the UFC for a number of years, though he’s struggled to secure the one truly breakthrough victory that would elevate him from “divisional stalwart” to “title threat.”

He’s had opportunities, sharing the cage with a host of elite competitors and established names over the course of his 19 fights inside the Octagon. But he arrives in Milwaukee at a bit of a crossroads, having ended last year on the business end of a defeat courtesy of current champ Khabib Nurmagomedov before headlining the company’s return to Atlantic City against Kevin Lee in April.

Barboza had his moments in the fight, as he has with many of his most high-profile pairings, but he wasn’t able to capitalize and the bout was ultimately stopped a little over two minutes into the fifth round.

“This next one is the most important fight of my career,” he said of his bout with Hooker, who enters on a four-fight winning streak capped by back-to-back first-round stoppage wins. “I always show a good fight for everybody, but the results are not the results that I want; I want to win the fight.

“I’m ready to win,” Barboza added. “I don’t need to prove anything to anybody, but I need to prove to myself (that I can still compete at this level). I really need this fight. I trained so hard to win this fight and I’m ready.”

Saturday’s bout with Hooker is a good measuring stick for determining both what adjustments and improvements Barboza has made since joining the squad at American Top Team and also where he fits in the ever-changing, always-dangerous lightweight division.

Is he a true Top 5 talent who has simply been beaten by the reigning champ and a pair of legitimate championship hopefuls or is he more suited to life just below the upper echelon, knocking off over-eager upstarts and dashing the hopes of veteran contenders looking to make one more run? 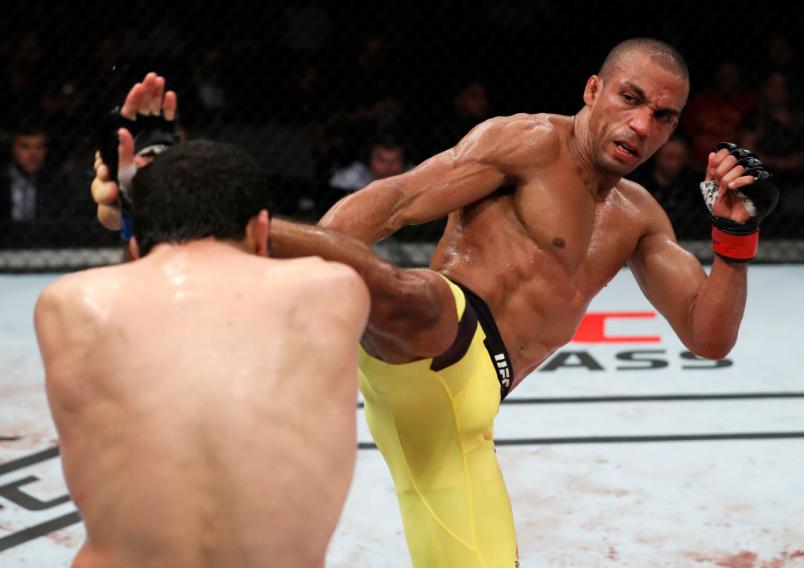 “I know I can beat anybody in this division,” he added. “And I really feel like this is a new start for my career, a new beginning. This will be my 20th fight in the UFC and I always test myself against the best guys in the world.”

Despite facing one of the hottest fighters in the division and facing a litany of questions as arrives in Milwaukee on the first two-fight skid of his career, Barboza is relaxed and excited about the opportunity to step back into the cage on Saturday night.

While winning is always the goal, he doesn’t feel any pressure to snap his current losing streak and is focused instead on doing what he always does — delivering an entertaining scrap to the paying customers at the Fiserv Forum and everyone watching at home.