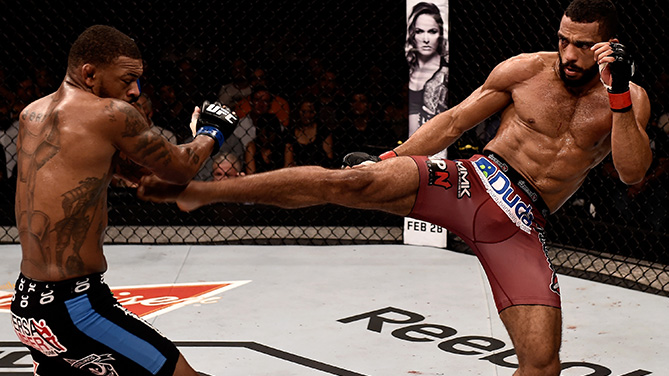 You didn’t see Edson Barboza’s eyes light up, but he probably smiled a little on the inside when he realized at a certain point in his July 25 bout with Paul Felder that “The Irish Dragon” had no intention of taking their fight to the mat. Not that he’ll admit it, even after winning a hard-fought unanimous decision that lifted his record to 16-3 and kept him in the lightweight top ten.

“That was an MMA fight,” Barboza said. “We can fight on the feet or on the ground.”

The FightMetric stats will show one attempted takedown from each striking specialist over the course of the three-round battle, but I challenge anyone to remember when they took place. For 99% of the folks watching that fight, it was simply a compelling and thrilling striking match, showing what can be done with fists, feet, elbows and knees in 15 minutes of sanctioned combat. 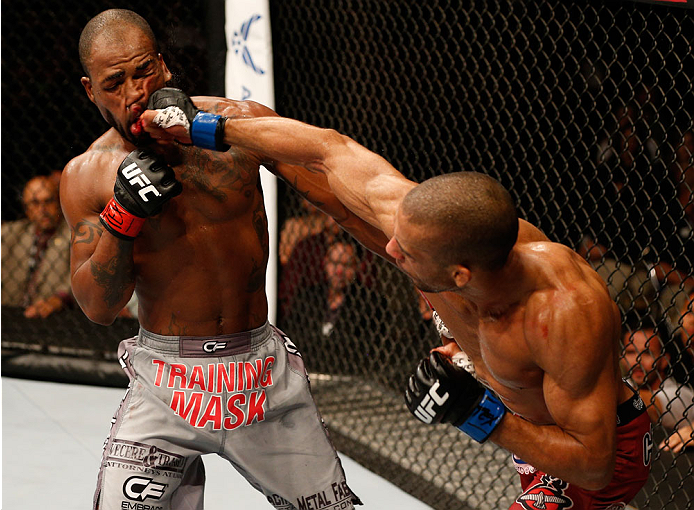 “It was a very technical fight and a true war,” Barboza said. “I was trying to find his mistakes, but he was doing very well, so I had to keep my concentration high and make some points over him.”

The Brazilian scored enough of those to get the 29-28 nod on all three judges’ cards, but this was no point karate match. Barboza and Felder threw hard and often from the start, seemingly unconcerned with the possibility of being taken down. “Junior” said he was prepared for a trip to the mat, and will be in the future as well.

“I was ready if he tried to take me down,” he said. “I trained very hard for this fight and for the next fight I will be more ready. I will train harder to show that Edson Barboza is even better at all points of mixed martial arts in every fight.”

All-striking fights are a lot more fun through, right?

“Yes, because I always step in the Octagon waiting for a war, and when it is a true war it makes me very happy.”

What made Barboza even happier is picking up a Fight of the Night bonus with Felder. It was the 29-year-old’s fifth such 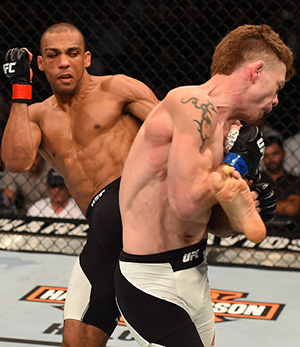 award (he also has a KO of the Night award for his 2012 finish of Terry Etim), and with the recent arrival of son Noah to the family, the timing couldn’t have been better.

“Of course those bonuses help a lot, thank God even more now that my family grew with my first son,” Barboza said. “I have to think about his future and the future of my whole family, but I never step in the Octagon thinking about any bonus.”

They seem to happen more often than not when the Brazilian bomber is in action though, which makes you wonder what it is about his mindset that produces such memorable battles.

“I just think about stepping in the cage and putting on a real fight,” he said.

And more often than not, that results in not just a post-fight bonus, but a win, and with an impressive 10-3 slate in the UFC, it’s no surprise that he’s sitting at number seven in the rankings and on the verge of entering the title picture. So who’s next?

“Anyone who is front of me in the rankings,” Barboza said, clearly setting his sights on championship gold sometime in 2016. In the meantime, what fight fan wouldn’t love to see the Muay Thai specialist in with an Anthony Pettis or Tony Ferguson? “Showtime” is in the number one spot currently, while “El Cucuy” holds steady at number nine, but Barboza said that he’s willing to throw hands with either of his 155-pound peers.

“For sure, man. If one of those guys could be my next fight I would be very happy and would be ready for any of those two.”

It all goes back to that eagerness for battle and fights that leave an impression on the fans. The funny thing is, it wasn’t always that way for Barboza, who has focused his vision as he’s gotten older and approaches his five-year anniversary in the Octagon.

“I feel very happy and blessed to be part of the biggest MMA event in the world,” he said. “What’s changed was that in the beginning of my MMA career I used to think about the financial thing, but as I was fighting and fighting I was liking MMA more and more, and now I really love my job. I’m truly blessed to do what I love. Throughout those years I also changed my team and now I'm a part of Ricardo Almeida BJJ with the best coaches and partners in the world and I'm moving to New Jersey because I'm focused now on bringing that belt to my home.”