Barboza not thinking about title against friend, focus is on Melendez 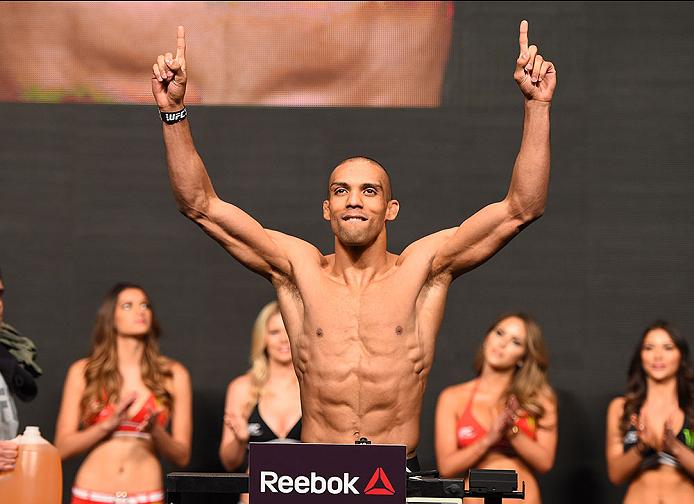 This Saturday, Edson Barboza will fight in the UFC on FOX co-main event against former Strikeforce champion and perennial UFC lightweight contender Gilbert Melendez, in a fight that could put him in title contention against new champion - and his teammate - Eddie Alvarez with a win.

“I don’t want to think about that,” the 30-year-old said. “I can only think about my fight with Gilbert. This guy, man, he’s good. He’s a great fighter and he always brings his best. It will be an exciting fight for sure, and I thank God that I’m healthy and able to compete. When Anthony Johnson got hurt and the fight was moved up on the card I was very excited. I’m not nervous at all. I’m here to do a job and that is to fight for the fans, for the UFC, for my team and for my family.”

Alvarez, for his part, has been a fortuitous addition to Team Frankie Edgar in New Jersey since he moved from South Florida back to his home on Philadelphia. Immediately upon arrival, he helped Barboza train and strategize for Anthony Pettis – whom Alvarez beat earlier this year, resulting in a unanimous decision for Barboza.

“I was able to put things together well against Pettis,” Barboza said. “Eddie told me he (Pettis) is going to do this or that, and he will react like this or that. He was very helpful and he’s doing the same for me against Gilbert.”

Alvarez beat Melendez a little over a year ago at UFC 188 by split decision, after a barnburner in Mexico City.

“Melendez is one of the best,” Barboza said. “He is a good match for me because we both come to bring the fight. I’ve always admired him but I know what I have to do to win this fight. I’ve had a great camp and it’s been an exciting time for us because Eddie won the belt.”

While Barboza is happy for Alvarez’s victory over Rafael Dos Anjos to win the title, he said half his heart is sad for Frankie Edgar, who dropped a second fight against Jose Aldo for the interim featherweight title. Edgar has been the heart and soul of a powerhouse East Coast team led by Ricardo Almeida and Mark Henry for the past seven years. A recent Muay Thai addition in Anderson Franca rounds out the staff.

“Mark Henry is my man,” Barboza said. “He always has good advice for life and fighting. “Marlon (WSOF bantamweight champion Moraes) brought in Anderson and he’s been a great help with my standup, and Ricardo is the jiu-jitsu master but he’s also such a great coach because he’s been in there and knows what it’s like. Together with Frankie we are all a family.”
RELATED CONTENT: Fight Night this Saturday on FOX | Inside the Matchup: Barboza vs Melendez

When pressed to talk about a potential title shot against Alvarez, Barboza was quick to say he would be reluctant to fight against a teammate and a friend. But none of that matters if he doesn’t get past Melendez, who has made a case in his career for a future Hall of Fame berth.

“To beat Gilbert would be great,” Barboza said. “He’s a veteran and has excellent striking. I think the fans are going to like this fight, but also, from my last fight against Pettis, you see how I’m patient and following my game plan. I have a game plan to beat Melendez and I will be disciplined. I’m not going to let him fight his fight. I will decide where this fight goes.”

Barboza historically has let his emotions get to him in big fights. He says he’s been seeing a sports psychologist to help him ease those emotions, and if his last fight was any indication, it has worked. Against Pettis we saw a more calculated fighter.

“For sure,” Barboza said. “I was the fighter that I am in the gym everyday, instead of the guy who just goes to fight. I am now able to put my game plan in motion and stick to it. I have my coaches and my family and friends to thank for that. I’m calm. I’m excited. I’m ready to do my job.”