Barboza: 'If you fight with me, you'll feel pain'

There are those in the world who look at someone like Edson Barboza and think that they can do what he does with a few trips to the gym and some runs around block.

Ask any opponent who has been on the receiving end of one of Barboza’s punches, kicks, elbows or knees, and there will usually be a sigh, followed by a silent nod or other acknowledgment of something that wasn’t born in him or developed over the space of a year.

A lifetime of work has gone into this for the native of Nova Friburgo, and when watching him do what he does, know that it’s of the highest level of striking. Yet the goal on fight night remains the same.

“If you fight with me, you’re gonna feel pain,” Barboza said. “I want to hurt you, that’s it. Everybody knows that. You step in front of me, there’s a big chance you’ll get hurt.”
RELATED CONTENT: Barboza featured on KO of the Week | Barboza's Greatest Hits

As scary and as real as that sounds, it’s even more startling considering that Barboza is as soft-spoken and respectful as anyone in the sport. He’s not a trash talker, he’s not trying to intimidate his opponents. It’s almost as if he’s giving them a respectful warning that, hey, if we fight, things might not go too well for you. Of course, being that good at what he does used to come with some negatives, especially when he began competing in mixed martial arts in the United States in 2009.

“I had a lot of Muay Thai fights showing up on social media and YouTube, and people kept pulling out of fights,” said Barboza, who began training in the art of eight limbs at the age of eight. “This happened to me more than ten times. I called all my friends, ‘Please take all the videos off because it’s hard to make a fight here in the U.S.’” 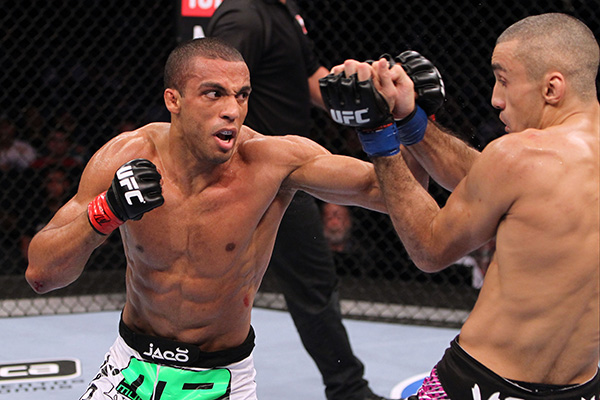 Luckily, that’s not a problem anymore, as the 31-year-old Barboza has sailed to the top of the UFC’s lightweight division and will compete in Saturday’s UFC 219 co-main event against the No. 2-ranked Khabib Nurmagomedov. For Barboza, who sits at No. 4 at 155 pounds, it’s another situation where what happens when the gloves are on is just business.

“Every time I step into the Octagon, I see a big war,” Barboza said. “That’s what I train for. He (Nurmagomedov) is a great fighter, definitely one of the best fighters in the world, and I was very excited for the opportunity to fight with him. It’s gonna be a great fight.”

That’s the general consensus, with the winner likely to earn a crack at either champion Conor McGregor or interim titleholder Tony Ferguson. Barboza, who lost a Fight of the Night battle to Ferguson two years ago, clearly has his preference for his next foe.

“I think Ferguson is the true champ of the division,” he said. “I really don’t worry about Conor. I don’t know about his comeback, I don’t care about him. The champ is Ferguson, and I hope if I win my next fight, I get the opportunity to fight with him. If I win this next fight, I deserve a title shot.”

He does, and so would the unbeaten Nurmagomedov if he leaves Las Vegas with a win, which many believe he will thanks to his swarming grappling attack. It’s the one thing everyone talks about when breaking down the co-main event, but Barboza isn’t too concerned with Nurmagomedov’s takedowns.

“I’m an MMA fighter,” he said. “I really don’t put my focus on his takedowns. My focus is on what I’m gonna do in the fight. I’m not scared if he’s going to take me down. Wherever this fight goes, I’m ready. I know if I go there and give my best, I’m going to win this fight.”

Then he smiles again, the nicest scary guy you will ever meet. But when someone can end an opponent’s night with one strike, that’s something to be happy about, right?

“This fight starts on the feet,” Barboza said. “It starts in my area.”