Barboza getting inside help for fight vs Pettis 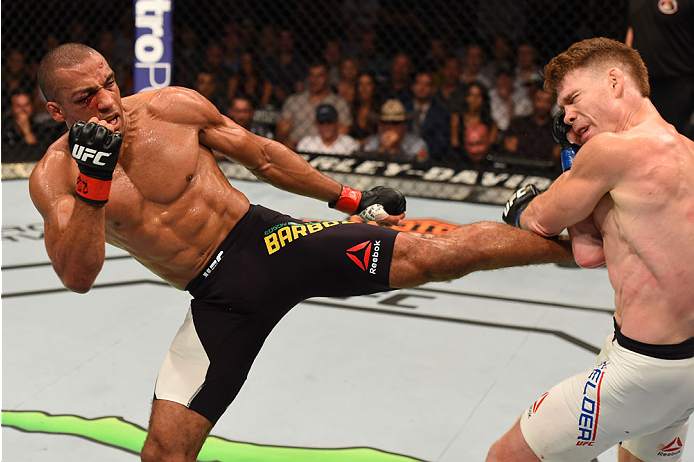 In what could be one of the greatest stand-up matchups seen in the UFC lightweight division in years, Edson “Junior” Barboza will take on former champion Anthony “Showtime” Pettis at UFC 197 Jones vs Saint Preux on April 23 in Las Vegas.

For Barboza, currently ranked No. 8 in the division, a win over the third-ranked Pettis puts him into the title contention conversation, and that fact isn’t lost on the Brazilian fighting out of New Jersey under Team Frankie Edgar and UFC veteran Ricardo Almeida.

“I want to win this fight because it will get me closer to the title,” he said. “That’s my goal right now, and I really believe that right now I can be the lightweight champion of the world. Beating Pettis will put me much closer to that goal.”

Barboza says he’s excited to fight Pettis and that everyone in the camp, from Edgar to coaches Almeida and Mark Henry have the highest respect for the Duke Roufus protégé. However, since Eddie Alvarez returned to Philadelphia after spending two years in South Florida training with the Blackzilians, the team has some inside knowledge on Pettis from someone who last beat him in the ring.

“Eddie Alvarez is back in our camp and we are so blessed to have him with us,” Barboza says. “He fought Pettis before and he’s coached me a lot on what to expect. We talk a lot about Pettis and that’s good information that I have to take with me into the ring.”

Alvarez won his bout against Pettis via split decision, and while Alvarez knows that it wasn’t the most exhilarating fight to watch, he executed the perfect game plan, where he smothered Pettis throughout most of the fight in order to minimize the explosive and tricky stand-up skills he’s known for. And it worked.

“Eddie Alvarez is back in our camp and we are so blessed to have him with us. He fought Pettis before and he’s coached me a lot on what to expect. We talk a lot about Pettis and that’s good information that I have to take with me into the ring.” -- Edson Barboza

So while Barboza doesn’t have the wrestling pedigree Alvarez has, he says he’s been working on it throughout this camp and that if Almeida has his way, it could come into play.

“Ricardo talks to me every day about everything,” he said. “He’s more than just a coach; he’s an inspiration. He’s been in there as a fighter so he knows the mindset of a fighter. Sometimes he sees things that other coaches don’t see because he has been in there dozens of times. He teaches me not only fight lessons, but life lessons as well. He says I must believe in myself; believe in my jiu-jitsu, my ground game and my wrestling. He says that if I can give 100 percent on the feet, on the ground and in submissions, I can beat anybody in the division. I believe in my training for this fight. I believe that if the fight goes to the ground I will be ready to attack.”

Pettis is a brown belt in Brazilian Jiu-Jitsu while Barboza is close behind with a purple belt.

At 30 years old, Barboza has plenty of experience under his belt. And as an athlete’s body begins to slow down, his brain begins to speed up – seeing the window for big opportunities closing sooner rather than later. At times like these, maturity and good coaches will see you through to the next level, where not only glory can be obtained, but also the kind of fortunes that can set one up for retirement. It is here where Barboza has shown maturity and an understanding of what he needs to do to break through in his career.

“Training camp is doing good man, thank God, I’m healthy, no injuries, this might be the best training camp of my career,” he said. “I can do 100 percent everything, and that is the biggest difference. I’m a little older and I talk to Ricardo Almeida, my coach, about training smarter, and it makes me stay safe but also more confident. When you get injured in camp it takes confidence away from you when it comes time to the fight, because you may be hesitant to throw a certain move because of injuries. It is better to train smarter, not spar so hard, maybe focus a bit more on technique than going hard all the time. Cardio is always important, of course, and you can’t go light with conditioning, but we are all individuals and we all have to adapt and listen to our bodies.” 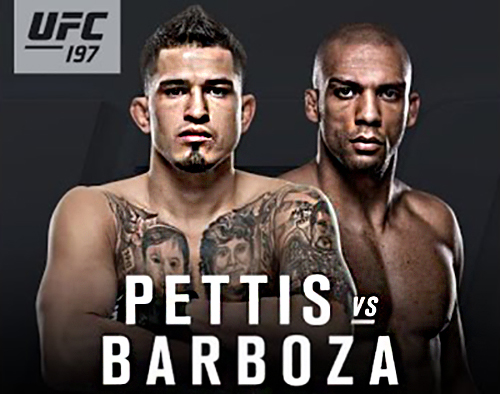 “Junior” says the way he feels, he would like to fight up to five times a year, and being in such a vibrant camp with fighters who are constantly on the calendar with big fights coming up, there isn’t time to relax too much.

“I’m always in good shape and I never stop training,” he said. “In our camp so many guys have fights all over so we are always helping each other. I love fighting. I’m a fighter, that’s all there is to it.”

Barboza vs Pettis has all the makings of a Fight of the Year candidate. Both fighters are known for their explosive kicks and hard punches. And while on paper Pettis may have the more accurate striking, Barboza has power in his kicks hat has earned him two TKO victories from leg kicks alone. For “Junior,” this is do or die time.

“I’m excited to fight Anthony Pettis,” he said. “He’s one of the best fighters in the division and he’s a former champion, and somebody everybody in our camp respects. We are going to put on a great fight, for sure, but it won’t be just a stand-up fight like a lot of people expect. This is an MMA fight and we go there to fight. We go there for war and this will be a big war.”