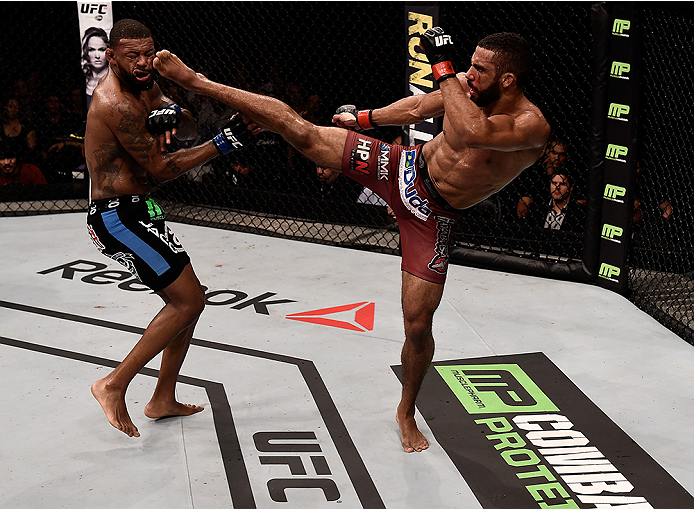 It’s Thanksgiving and Edson Barboza ascends the steps from the basement apartment in Toms River, NJ that he shares with his wife Bruna and their one-year-old son Noah to the main residence, where family and friends are gathered for a wonderful feast.

It should be noted that the Nappis are Renee Edgar’s parents, Frankie’s in-laws.

While the American holiday is marked by an over-indulgence of food and drink, Barboza (as well as Edgar and Hettes) are in the midst of camp. Barboza and Edgar – for their part – share co-main and main event duties at The Ultimate Fighter Finale on December 11th at The Chelsea at The Cosmopolitan in Las Vegas, Nevada. Edgar takes on Chad Mendes and Barboza faces Tony Ferguson, currently on a six-fight win streak. Hettes fights just a few weeks later against Charles Rosa.

He’s just fourteen days from weigh-ins for a lightweight bout in which the Brazilian needs to weigh 155 pounds. He spends dinner drinking ice water and chasing after Noah, who has taken to chasing Moraes’ 14-month-old son Raphael. The two look like future champions even at one, while Santino (5) and Francesco (7) Edgar watch after their one-and-a-half-year-old sister Valentina and their 6-month old cousin Caleb.

It’s a surreal scene. Here are some of the world’s greatest MMA fighters and perhaps their future champion offspring, all under one roof. It is an MMA fan’s dream – like some kind of fan cruise with the New York Yankees, or perhaps a reality TV show: The Real Fighter Families of New Jersey.

But there are no fans here tonight. There are no cameras. Tonight is for family. And this one is tight.

A toast is offered to the hosts, and everyone raises their glass to Jerry and Debbie and gives thanks that there is a place for such a gathering. The team is safe here. There are no distractions from the task at hand – which is to bring back Ws to Toms River.

“I know Tony Ferguson is tough,” Barboza says. “He does it all. He’s got some striking, wrestling and jiu-jitsu. He’s someone you have to prepare for in a lot of different ways. He’s not someone you can prepare for in just one way. He’s well rounded and dangerous no matter where the fight goes.”

“Junior” likes to give thanks to the Lord above, and often remarks how blessed he is for being in such a spot, not only in his career, but in his life. After all, just over a year ago, Marlon Moraes and his wife Isabella were living in the same apartment Barboza lives in now, and now the Moraes own their own home nearby. In fact, Frankie and Renee Edgar lived there too when they were first married. The place has a certain aura about it that manifests success.

It’s all part of the plan for Barboza as well.

“I’m just blessed to be here. I love my job. I have my wife and my son and I fight for them the most,” he says. “Thanksgiving is hard because of making weight, but I love it here. I love being with my family and my brothers on this day. I am thankful for Jerry and Debbie and all the things they do for all of us. Marlon and Frankie are my brothers. I have my friend Anderson Franca for the Muay Thai training staying with us with his wife Michelle. It has been a great camp.”

Anderson Franca has become a force in the Ricardo Almeida/Renzo Gracie world in Jersey, as well as Nick Catone’s MMA gym, where on Saturday the guys go for six rounds of hell.

“Anderson is the best Muay Thai striking coach in MMA,” boxing coach Mark Henry says. “He’s awesome because some coaches are stuck on their discipline but Anderson doesn’t mind mixing it up with mixed martial arts techniques, which makes his brand of Muay Thai so dangerous. We fly him out for every one of our guys’ camps. If Frankie has a fight or Marlon or Edson, we make sure Anderson is here. He’s helped us tremendously. “

In between sessions, Catone, a former UFC middleweight and owner of this state-of-the-art MMA gym in Bricktown, NJ, mops the cage clean himself and then waits for the mats to dry before allowing the next session to begin, as his wife Marjorie and their own two young daughters – one newborn – announce their own presence. Catone is meticulous and the gesture is a testament to how this team operates. Everyone checks their ego at the door. Former UFC fighter Chris “The Story” Liguori – a longtime Team Edgar teammate – offers to keep time.

Barboza takes the cage next, with Henry watching like a hawk, his ever-present iPad filming.

Up first is recently retired UFC lightweight Frankie Perez, who perhaps resembles Ferguson’s style the most today and, by the looks of him, his retirement was way too early. Chandler and Hettes jump in for rounds four, five and six.

“Coming off a bicep and leg injury he’s doing great this camp,” Henry says. “His weight is good and he’s looking like a beast in the cage. I am really happy with what I’ve been seeing. He’s putting everything together the way he always does, and having Anderson around has really helped him pick up the pace and the momentum.”

While Chandler is just visiting this time out, Eddie Alvarez has recently joined the team and has been sparring with Barboza regularly for this camp. Henry says Eddie’s a beast, and the two, along with Edgar, have meshed well as Alvarez prepares for his own battle with former champion Anthony Pettis in January.

“All of these guys are really great and they push one another,” says Henry. “This is the first time we’ve been able work with Chandler, and not only is he a great fighter and a great partner, but his attitude is amazing. He’s a guy who came in here asking how he could help. He’s been such a great teammate from day one. I was always a fan of his, but now that I’ve seen him work I’m super-impressed with his work ethic and his humility. Jimy Hettes just keeps coming forward. He’s been putting rounds in with Junior and he’s been amazing, as always.”

Ferguson has proven to be a tough opponent time and time again, but Barboza believes he’s put the work in needed for victory.

“I’m confident everywhere against Ferguson, anywhere the fight goes,” he said. “Of course I need to improve, but I trust my coaches. My wrestling has gotten very good as well as my ground-and-pound, but I just need to trust my skill.”

The team believes with Khabib Nurmagomedov injured, anything can happen in terms of a title shot in the lightweight division. With wins over Ferguson and Pettis, either Barboza or Alvarez could conceivably be up next, and the feeling of opportunity is in the air.

There’s something different about Barboza this time around, and both Franca and Henry believe he has grown to believe in his boxing like never before.

“He wasn’t always comfortable with punches coming at him, but he’s turned the corner and he’s calm and cool in the pocket,” Henry said. “I’ve had more and more guys throwing at him boxing wise, more so than just Muay Thai training. He’s been slipping and dipping well. He can pull back on a punch and his opposite hand is always up now. When you throw at him now, you are going to pay. He used to back out, but now when guys throw he’s not afraid to throw back.”

When asked if Edson’s changed his approach since the birth of his son, Henry didn’t hesitate.

“He was a killer and he is a killer,” he said. “It’s just ingrained in Edson. He’s one of those guys when you ask who do you want to fight next, he says ‘anybody coach. Anybody.’”