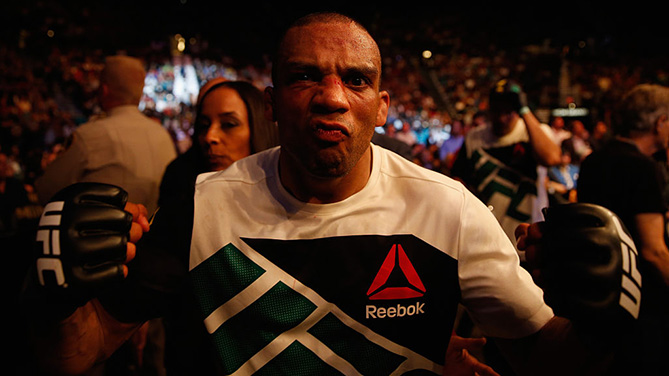 The first time Frankie Edgar squared off with Cub Swanson, the featherweight contenders were the headlining act in Austin, Texas and Edson Barboza picked up a victory in the penultimate bout of the evening.

As the 145-pound stalwarts get ready to run it back this weekend in Atlantic City, the roles are reversed. This time around, Edgar and Swanson will be setting the table for Barboza, who faces Kevin Lee in his first main event assignment as the UFC makes its return to the Jersey Shore. 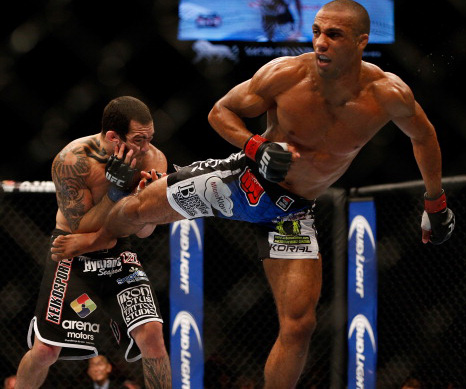 “I don’t think like that – ‘Now it’s my time,’” laughed Barboza when asked if he’s ribbed his long-time teammate about switching spots on the card from the night they both picked up victories in the Texas capital in November 2014. “It’s always a pleasure fighting with Frankie, on the same card; he’s my brother.

“I moved to New Jersey because he called me to help him and train and I said, ‘These guys are on another level here’ because of him and all my training partners. It is always, always a pleasure to fight on the same card as Frankie.”

The 32-year-old Brazilian initially set up shop Stateside in Jupiter, Florida, the Oceanside outpost that is home to scores of professional golfers. In early 2016, he made the decision to trade the sun and sand for all four seasons and year-round training with Edgar and the rest of the “Iron Army” crew.

Barboza won each of his first three appearances after relocating, earning unanimous decision wins over Anthony Pettis and Gilbert Melendez before planting a picture-perfect flying knee on the chin of Beneil Dariush when the two met in Fortaleza, Brazil in March 2017. The run of success carried him into the Top 5 and landed Barboza across the cage from Khabib Nurmagomedov at UFC 219.

He suffered the same fate as each of the 24 men that shared the cage with Dagestani grappling machine before him.

“I was very, very, very sad about that fight, but it’s over. I have a fight coming up. I’m more motivated than ever and I’m very happy with the opportunity to fight again.”

That ability to put setbacks behind him quickly and focus on what lies ahead, rather than dwelling on the past, is a Barboza hallmark and it has likely contributed to the success he’s had throughout his career following a loss.

Every time the talented Brazilian striker has “caught an L,” he’s immediately countered with an impressive performance that gets him right back into the win column and moving forward in the deep lightweight ranks once again.

Additionally, after being shuffled back to the prelims for a stretch after his upset loss to Jamie Varner at UFC 146, Barboza has remained on the main card following each of his other four losses and is buoyed by the fact that even coming off of a defeat, the UFC continually calls upon him to face elite competition on quality fight cards.

“I remember when I lost to Ferguson, UFC gave me a chance to fight with Anthony Pettis, a former champ; it was the biggest fight of my career,” said Barboza, who enters Saturday’s event with a 13-5 record inside the Octagon and a 19-5 mark overall. “Now I lose to Khabib and the UFC gave me chance to fight in the main event of the show.

“I think that’s because I always put on a good show – I always show everybody I’m one of the best in the world,” he added. “When I lose, I get back in the gym right away and start training hard to get better and better and fix all the mistakes. It never crossed my mind to get two losses straight.”

Thus far, Barboza has avoided that fate, and in order to do so again this weekend in his first headlining assignment, he’ll have to get by Lee.

A fellow fixture in the Top 10, the 25-year-old Detroit native returns after coming up short in his bid to claim the interim lightweight title snapped up by Tony Ferguson back in October. Before that, Lee had rattled off five consecutive victories to move up the ranks in the treacherous 155-pound weight class and catch the eye of the man he’s facing on Saturday night in Atlantic City.

“Yeah, definitely,” Barboza said emphatically when asked if “The Motown Phenom” was on his radar prior to the two being paired together this weekend. “He wants the best in the world and he’s a Top 10 guy.

Adding to that feeling this time around is that he’s competing in his own backyard, close to family and friends, in a city where he has pleasant memories of stepping into the cage.

“It motivates me, but I’m not superstitious; I don’t believe in that,” said Barboza, who is a perfect 4-0 in his adopted home state, including a first-round stoppage win over Evan Dunham in his last appearance in this weekend’s host city. “I believe in hard work and going out there and giving my best, that’s it.

“I fought three times in Atlantic City – two times in small shows and one time for UFC – and I fought here in New Jersey too, in Newark. Four times I have fought in New Jersey – that’s my home, that’s my place and I’m very happy to fight in my backyard.

“I will get in my car, drive for 40 or 50 minutes and I’m there. All my friends and family will be there, all my training partners; I’m very, very happy for that.”

As for what he expects after making that quick jaunt down the Garden State Parkway for his meeting with Lee on Saturday, he talented Brazilian always prepares for the same thing.

“All the time that I step inside the Octagon, I expect a big war and this fight is no different,” he laughed. “I’m ready for war. I’m ready for a 25-minute war. You’ve got to expect it.”