"I think every fight in UFC is a test for my Muay Thai, but this is not a Muay Thai event, so I'm ready to fight on the feet and on the ground." - Edson Barboza 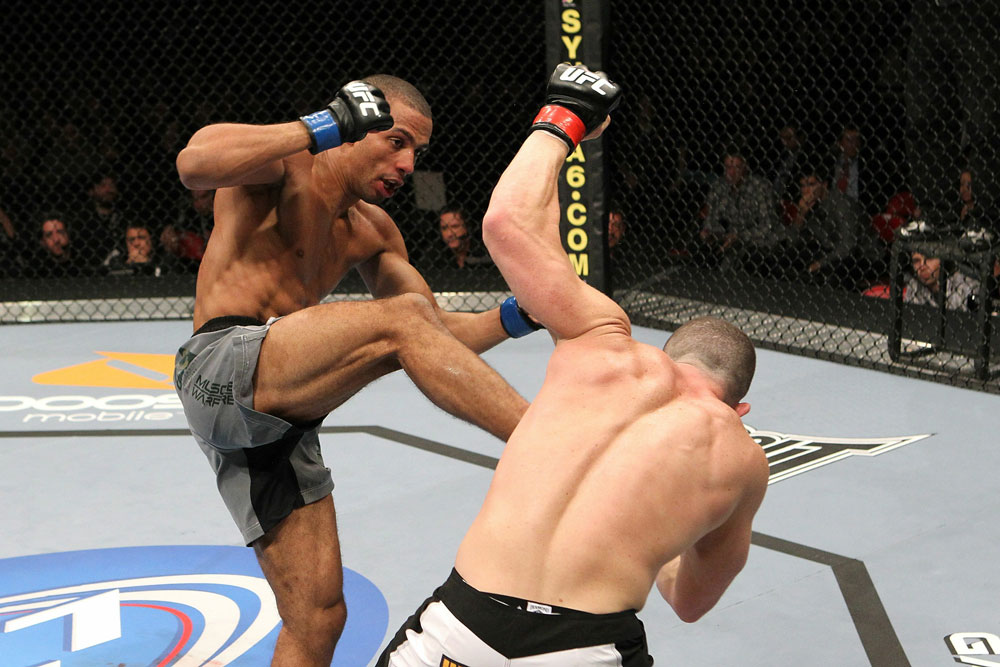 The striking level showed by Brazilian lightweight import Edson Barboza in his first UFC bout was something close to perfection.

The Muay Thai machine - who makes his second Octagon appearance this weekend against Anthony Njokuani - debuted at UFC 123 last November and the same kind of destruction which he delivered regularly in his performances outside the Octagon was repeated against Mike Lullo, who succumbed to devastating leg kicks in the third round.

It was an amazing start for Barboza, a Team Armory product who kept his MMA résumé perfect while revealing himself as a new force in the tough 155-pound division. Needless to say, the outlook for 2011 looked bright.

But life can change in a split second. So while Barboza and his wife Bruna were safely living in the USA and waiting for the news from the UFC regarding his next fight, the city where both were born - Nova Friburgo - was being affected in early 2011 by strong rains and flooding which devastated the place in the highland area of Rio de Janeiro. It generated 246 deaths in the first 15 days of the New Year and sent Barboza scrambling to find out whether his beloved parents and friends were among those who lost their lives.

"That was really tough to follow the news by internet and TV because we didn't know what was really happening and we didn't get to call our parents and friends," says Barboza, who lives in Jupiter, Florida. "I just trusted in God that all would be fine."

Videos and photos of the destruction hit Barboza hard as he saw what happened to his city. The catastrophic scenario motivated his manager (Joe Mullings) to create a foundation to help the people who lost everything.

"Mullings' initiative started after that horrible sequence of events, so the campaign collected funds to support Nova Friburgo."

Watching the unfolding of the situation consumed the mind of the 25-year old fighter, understandably taking his focus on training away. That was something that only returned when Barboza finally heard back from his family and that of his wife.

"Everything shook my head,” he said. “I put myself down as I realized the scope of the tragedy, but as we got to contact family and close friends I got a bit better and got back to my routine. But, I only think that I'll have an exact idea of the destruction when I visit my city again."

Following his training camp for Njokuani, in what is a classic striker vs. striker matchup, Barboza looked back to his first step inside the Octagon. The fight which kicked off the Brazilian’s journey in the UFC developed like expected. Dictating the pace with leg kicks while avoiding the dangerous Lullo's guard, Barboza brutalized his foe’s legs until he lost the ability to stand. And he did it all without experiencing the first-time UFC jitters, as he kept the calm and imposed his game plan. But he does praise Lullo's courage.

"I think other guys would have fallen from less punishment then he suffered,” said Barboza. “If he was in the UFC, it was because he's a good fighter and he showed a lot of heart."

Courage alone wasn't enough to stop a fighter like Barboza, but he recalls that every time Lullo pulled to the guard that was the area where if he made one mistake, he was gone.

"I watched his fights (outside the UFC), and he subbed all the guys who were inside his guard," Barboza said. "When he pulled me I knew that he was really dangerous, but I was very conscious. He didn't nearly submit me or get something close to that and then I could bring the fight back to where I was dominant."

Guard, ground and submission aren't words which have much to do with Barboza's next fight. Standing across the cage, Njokuani has all the ingredients to score knockouts standing as well as Barboza does. And since we're talking about MMA here, we need to expect everything, even though we, deep inside, know what the fists, knees and feet of both can produce on March 19th.

We believe it, and if the expected KO doesn't come, we know the magic of MMA can be displayed with a well-versed Thai fighter finishing the other by submission. However, with the aggressiveness of these two guys, can we expect anything other than a standup war?

Mark March 19th on your calendar for the UFC 128 preliminary fight on Spike TV, as it’s going to be a heavy-handed collision involving Muay Thai fighters and the surprises they may bring.