By Duane Finley and Translated By Tetsuya Takahashi • Jan. 25, 2016 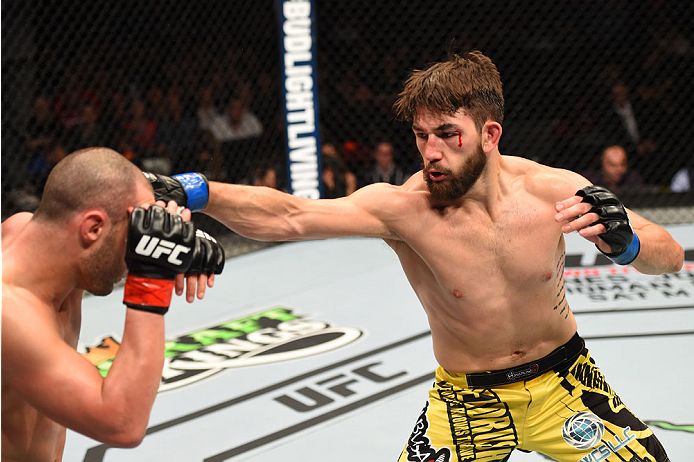 Bryan Barberena can’t deny that there is an added element of excitement for his next trip into the Octagon.

The MMA Lab representative has always been wired to fight and loves to mix it up under the bright lights, therefore an upcoming scrap on the biggest stage in the sport isn’t what is pushing his anticipation to new levels. Instead, it’s an energy created because his next outing will come against highly touted prospect Sage Northcutt - a fighter who has been all the rage as of late.

Although the gritty welterweight was initially slated to face Jonavin Webb when the promotion returns to Pittsburgh next month, a twist of fate opened a slot opposite the Texas wunderkind this Saturday in Newark, New Jersey. Barberena knows there is a ton of hype surrounding “Super Sage,” and he would love nothing than to be the fighter who derails Northcutt’s rise.
“There is no added pressure here for me,” Barberena said. “I was already getting ready to fight someone else and I’m in excellent shape. It doesn’t matter who the guy standing across the cage is because I have to go out there and fight my fight. I have to outwork and beat whoever it is so there is no extra weight on my shoulders. I don’t know how it is for him. He’s had a ton of media around him for his first two fights in the UFC and I’m sure there will be plenty for this one. I’m not sure how it affects him and maybe not at all.
Barberena steps in to fight Northcutt at Fight Night Newark | Barberena fighter bio | Matchup: Northcutt vs. Barberena

“Sage is on a pedestal right now. He’s getting these fights and the media is all over him. He’s some prodigy or the next big thing. Okay, fine…whatever. I’m not worried about that and I’ll be more than happy to take the hype away from him. I’ll also take some of his fans too. People aren’t giving me a shot and proving them wrong is the fun part. I’m going to push the pace and put him in situations he’s never been in before.

While Barberena appreciated the challenges his initial dance partner would have presented, he’s fired up to prove he can solve the riddle no one who has faced the surging 19-year-old has come close to figuring out. Northcutt’s slick striking style and underrated ground game has proven far too much for his previous opposition to handle, but Barberena believes his gritty no nonsense approach will force the undefeated phenom to deal with something he’s never before encountered.

As cliché as it is that “styles make fights,” that doesn’t mean there isn’t truth to the statement. With Barberena holding veteran status over his opponent, he knows the limits he can push himself to, and the fact that Northcutt hasn’t been tested to that degree is a facet of the fight which creates a huge opportunity from Barberena’s vantage point.

“I was excited to get back into the cage and go into the gym knowing I had something coming up,” Barberena said. “I am in there training every day, but it’s so much different when you have a specific opponent to prepare for. It fuels the fire in a much different way.

“I was pretty excited about the scrap with Jonavin [Webb] because that was going to be a great one, but I couldn’t pass up this opportunity when they UFC called. [Northcutt] has all this publicity and hype behind him. He has cameras following him all the time and this fight creates a situation for me to really get my name out there in a big way. I think my toughness and my ability to pick things up as the rounds go on are going to be difficult for him to handle.”

With the biggest fight of his UFC run coming this weekend at UFC Fight Night: Johnson vs. Bader in New Jersey, Barberena isn’t allowing the extra attention to take away from his enjoyment of the here and now. He knows there will be a big task waiting for him in Newark, but, in his mind, the bout with Northcutt is just one more step in the dream adventure he’s been on for the past several years.

“I honestly love what I do,” Barberena said. “I love the sport and competing, but I truly want to climb the ladder. I want to show people what I can do and shock a whole bunch of them along the way. I’m having a lot of fun doing what I do and I’m enjoying the ride and the process. I’m excited to see what the future brings and the next thing coming up is Sage Northcutt.”