Barber knew the contract was hers even before the fight 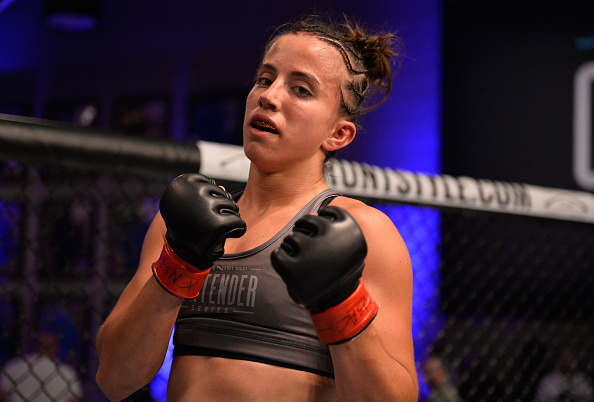 Maycee Barber celebrates her victory over Jamie Colleen in their womens strawweight fight during Dana White's Tuesday Night Contender Series at the TUF Gym on July 17, 2018 in Las Vegas, Nevada. (Photo by Chris Unger/DWTNCS LLC)" align="center" />
It’s an exchange repeated throughout boxing history, so many times that it’s impossible to pin down to one pugilist, but it still sounds cool whenever it is brought back.

“Champ, when did you know you had your opponent in trouble?”

“When he signed the contract.”

That brings us to Maycee Barber, the newest member of the UFC’s strawweight roster. The 20-year-old earned that contract with a July 17 stoppage of Jamie Colleen on Dana White’s Tuesday Night Contender Series. So Maycee, when did you know you had the UFC contract?

“I knew I had the contract before I even had the fight,” she said. “When I was told I was going on the Contender Series, I said I’m not just going in to win a fight; I’m gonna win a fight, but I’m also going here to get the contract.

“I’m gonna treat every fight the same, like that person’s the best in the world,” Barber continues. “But my ultimate goal on that trip was to get a UFC contract and show what my family and everyone else behind me has already seen. I knew I was gonna get the contract as soon as they saw what I could do.”

If that sounds like a young lady on a mission, that would be accurate. And when she says things like that about the contract or about her goal to become the youngest champion in UFC history, it doesn’t come off as cocky. It’s almost matter-of-fact when coming from the Colorado native, who makes her UFC debut in her home state against Maia Stevenson on November 10.

And frankly, despite only having five pro fights, ask those in the business about Barber, and they’ll likely tell you that her nickname, “The Future,” is as accurate as it gets. But having people say good things about you and believing them yourself are two different things. Barber is a believer, and she knows exactly where her confidence comes from.

“It comes from my background,” she said. “We’ve put every waking minute into this. When you work for something so hard and everyone’s sacrificing and everyone’s putting in everything they possibly can, you have nothing but confidence. You don’t have to worry if you’ve done enough. We’ve done enough. We’ve continuously put in everything we possibly can and when you’re giving everything you can give, you should have nothing but confidence.”

Confidence will get you a long way in anything, including mixed martial arts, but while confidence can put you in a position to succeed, when the Octagon door shuts, you have to be able to back that confidence up, and Barber has done just that on her way to a perfect pro record. It may seem remarkable for someone so young, but Barber didn’t just fall out of the sky like this. Her journey began a long time ago, and even then she had big dreams. But they only crystallized when she was in her late-teens and decided to set her sights on the record Jon Jones set when he won the UFC light heavyweight title in 2011 at the age of 23 years and eight months. And yes, Barber knew that information off the top of her head, not me.

“When I decided to fight, I was 13 years old, but I didn’t really see a clear picture as a UFC fighter,” she said. “It was a hobby as a kid. But then as it started to become more and more real and closer to me turning 18 and being able to fight, that’s when I started training more intensely and I realized I could really do this. I was 19 and I said, ‘That’s four years – how much can I improve in the next four years?’ And I see where the strawweight division is at and it’s not a huge division. There are some tough, tough girls, don’t get me wrong, but I’ve trained with them all. I’ve trained around and in the same gym and even sparred with a lot of them in the top ten and the top five. And I know where I was at.”

A year later, she’s even better, which makes her even more confident that she won’t just make a run at Jones’ record, but set a bar that may not get reached for a long time.

“We’re not even gonna break that record,” she laughs. “We’re gonna crush that record.”

Barber sounds like she’s enjoying every part of this journey, and why not? She’s not even 21 yet and she knows what her life path is for the next several years. A lot of people her age can’t figure out what movie they want to see this weekend, and even more twice her age still haven’t decided what they want to be when they grow up. Having that clarity isn’t lost on Miss Barber.

“It’s definitely a powerful feeling, but if you think about it too long, it can be overwhelming in a sense,” she said. “A lot of kids are like, ‘I don’t know, I think I want to go to college,’ and a lot of them aren’t entirely sure about what they want to do, and here I am. I just signed to the UFC and I’m 20 years old and there’s this path of where I’m going and I can see it clearly. But, at the same time, this is almost too perfect. I have a path that’s clear and I know exactly what I’m doing. So that can be overwhelming. But I figured out what I want to do with my life and I’m really young. It’s awesome.”

And it should only get better from here. But when does “The Future” become “The Present”?