A mixed martial artist doesn’t fight professionally 40 times over the course of 11-plus years without using a few mental notes that can provide a psychological edge. For Renan Barao, competing in his home country of Brazil, where he has not lost since 2005, is one such comfort that he will likely use to motivate himself this Saturday when he faces Phillipe Nover in Brasilia.

The other? Knowing that training with his longtime team, Nova Uniao, gives him something few fighters can boast of having in the heat of battle: peace of mind.

“I am a little superstitious,” Barao admits. “But the main charm leading to this fight is the training I did. I always say I train with the world's best and I am very well trained and very well prepared and I think that's my biggest amulet.”

The former UFC bantamweight champion is using all of his tools – physical and mental – to prepare for this pivotal moment in his career, and there are no distractions for the Natal native, with the only thing in his sights being Brooklyn’s Nover.
RELATED CONTENT: Barao fighter bio | The Gracie Breakdown on Barao | Submission of the Week - Barao vs McDonald

“I'm totally focused, all my camp was focused on this fight, I'm good and I’m calm,” he said. “He (Nover) is a guy who is a little heavier and stronger and I think he works well in grappling and jiu-jitsu, but that's it.”

A former lightweight, Nover has gone 1-1 in the UFC at 145 pounds, but he’s still a big featherweight. Dealing with that size will be the issue for Barao, who dominated the bantamweight class for nearly two years before losing his title to TJ Dillashaw in May of 2014. Since that defeat, “The Baron” has gone just 1-2, with a rematch loss to Dillashaw prompting a long talked about move to 145 pounds.

And while Barao got Fight of the Night honors in May against Jeremy Stephens, he also wound up on the short end of a unanimous decision.

“It was a tough fight, a great fight,” Barao said. “However, not only me, but many people think I won the fight.” 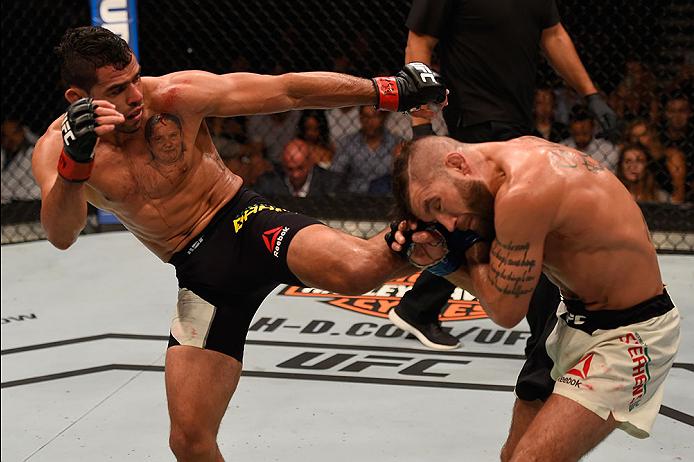 Regardless of who the judges declared the victor, it was the kind of fight in which there were no losers, as both Barao and Stephens gave their all in the Octagon for 15 minutes. More importantly, it was one that Barao didn’t have to fight twice – once with the scale, once with Stephens.

“Now is quite different,” he said. “There is no longer the suffering I had to go down to 135 pounds. Back then, the weight loss was exhausting for me and I was not having a good recovery. This time, being 145 pounds is pretty quiet for me, without suffering. I only train and think about the fight. That, to me, was a big difference.”

It’s funny how some words translate from Portuguese to English with the exact same meaning, and suffering is suffering, no matter where you come from. It’s what cost Barao his initial rematch with Dillashaw, and no doubt began to drain him with each passing fight. Now, he may be giving up size on fight night, but he’s gained a lot more.

“I feel at home and I feel peaceful in not having to lose so much weight,” he said. “I can loosen up my game, fight and think about it during the fight. That’s important. At featherweight, I have more desire to fight, because losing weight isn’t so hard.”

Clearly in a good place as he looks to rebound from the 1-3 streak that began in 2014, the 29-year-old still isn’t going to say that 2016 has been perfect, but it has given him enough to stay positive heading into the tail end of the year and into 2017.

“2016 was a year of great learning,” Barao said. “Unfortunately it was not an apprenticeship with victory, but losses, but I understand that we should never think of losses as anything but a learning experience. I'm going back now to 1000 miles per hour, and may God give me a 2017 with plenty of challenges. We are athletes and we seek challenges, and in 2017 I have many challenges in this division.”

That’s probably the nicest way any fighter has told his divisional peers that he’s coming for them, but that’s Renan Barao’s style. He saves his talking for the Octagon, and this Saturday, he has some statements to make.

“I’m going back to having my arm raised after a victory,” he said. “That is the result of hard work. I made a very tough camp with my team, Nova União, so I think it (a win) will have meaning not only for me, but for all my team.”