TORONTO, September 21 – Interim UFC bantamweight champion Renan Barao made the second successful defense of his title Saturday night at the Air Canada Centre, knocking outEddie Wineland in the second round of their UFC 165 co-main event. Now all that’s left for the Rio de Janeiro bomber is the one 135-pound fight that the world wants to see.

“We’re just waiting for Dominick Cruz,” said Barao of the current champion, who has been sidelined by injury since defeating Demetrious Johnson in October of 2011. And with Cruz hoping for a 2014 return, that fight may finally be getting closer.

But first for Barao was the business of Wineland, the WEC’s first bantamweight champion, and one who came to fight in Toronto. Fearless and almost disdainful of his foe in the early going, Wineland got off some hard punches and even forced a restart from referee Yves Lavigne after stuffing Barao’s first takedown attempt. Barao wasn’t rattled at all though, calmly waiting for his opportunities to counter or reel off moves that would make highlight reels if they landed. Unfortunately, they weren’t landing yet.

In round two, it did, with a spinning right back kick catching Wineland flush in the face. Wineland fell to the mat and Barao wouldn’t let him off the hook, with his follow-up barrage prompting a stoppage from referee Yves Lavigne 35 seconds into the stanza.

Conventional wisdom said that for Brendan Schaub to beat his Ultimate Fighter 10 castmate Matt Mitrione, he would have to use his ground game. And he did, submitting Mitrione in the first round, but not before using his striking to get the fight to the mat, capping off one of his most impressive Octagon victories.

It was a war of nerves as the bout commenced, with the tension being broken by the bombs both heavyweights threw at each other, leaving Mitrione with a cut on his left eyebrow and Schaub with one on his hairline. Schaub, who was having success landing his right hand, suddenly flurried with less than two minutes left and then slammed Mitrione to the mat. There, Schaub showed off his ever improving ground game, catching Mitrione in the fight ending d’arce choke at the 4:06 mark.

Montreal’s Francis Carmont scored what was perhaps the most dominant victory of his UFCcareer right when it mattered, as he extended his winning streak to 11 (six in the UFC) with a three round unanimous decision over Costa Philippou. 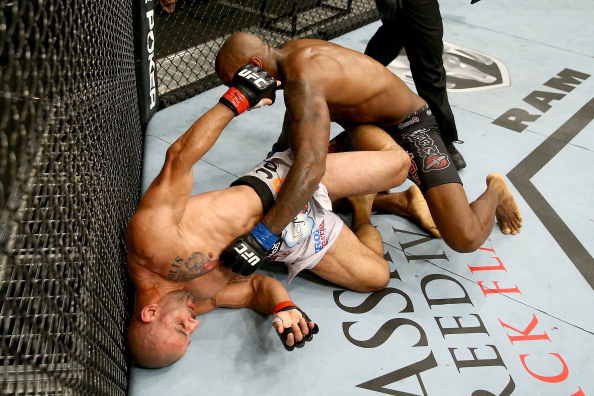 Carmont scored with a couple leg kicks before getting a takedown in the opening minute, keeping Philippou from implementing his striking game. While on the mat, Carmont landed some hard shots and almost got a rear naked choke before Philippou was able to get his back flat on the canvas. Both men stayed busy on the ground, Carmont looking to improve position and Philippou trying to catch a submission.

After another takedown to open up round two, Carmont stayed in control until a restart from referee John McCarthy with 2:12 remaining in the frame. Philippou wasn’t able to stay upright long though, as Carmont put him on the mat again almost immediately to wrap up another round.

Dominating the fight up to this point, Carmont confidently fired off some high kicks and then scored with a takedown and ground strikes, not allowing Philippou any chance to get back into the fight. It wasn’t scintillating stuff, but it was more than effective.

With the win, Carmont improves to 22-7; Philippou, who saw a five fight winning streak snapped, falls to 12-3 with 1 NC.

“UFC, give me a title shot,” said Nurmagomedov. “I’m ready.” 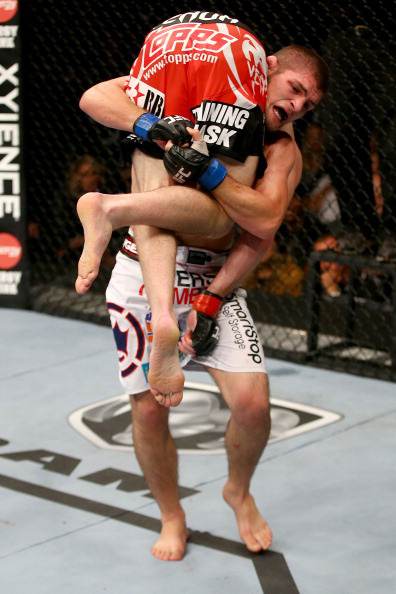 As promised, Healy (31-16, 1 NC) pressured Nurmagomedov from the opening bell, forcing the Russian to fight going backward in the early going. But once “The Eagle” settled into the fight, he began giving back as good as he got with punches and knees, quickly reddening Healy’s face. Of course, that wasn’t going to slow the Oregon veteran down, and despite getting cut under his left eye, he kept moving forward and swinging until getting taken down in the final minute.

The pace remained high in the second, with Healy stalking and throwing, and Nurmagomedov countering any chance he got. Where Nurmagomedov was able to get out in front was in the variety of his attack and his grappling work, which produced another late takedown.

Nurmagomedov shot for a takedown early in round three but was turned back, allowing Healy more time to get his punches off. With a minute gone though, Nurmagomedov got his takedown and went to work. And while Healy got up midway through the round, Nurmagomedov picked him up, carried him across the Octagon and slammed him, igniting the crowd before the Russian grounded and pounded Healy for the rest of the fight.