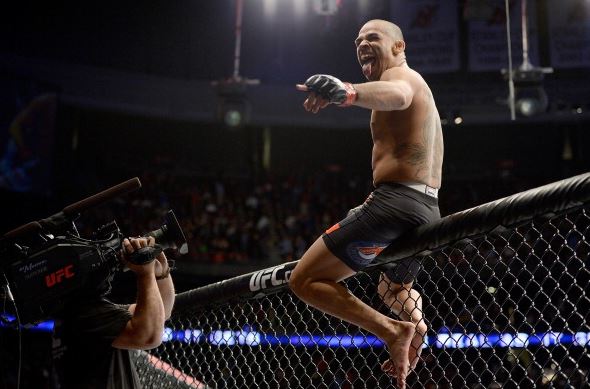 NEWARK, February 1 - On a night when the UFC 169 card at the Prudential Center in Newark produced the most decisions (ten) on a single card in UFC history, bantamweight champion Renan Barao closed the show with a knockout, finishing off Urijah Faber in the first round.

The successful title defense was the third for Barao, who was elevated from interim to undisputed 135-pound champion after Dominick Cruz – his original opponent for this bout – relinquished his title due to injury. Faber, who came in on short notice for Saturday's bout, had previously lost a five round decision to Barao at UFC 149 in July of 2012.

The action was tense and fast-paced from the start, with both Barao and Faber having success in the standup game. Barao’s shots were the heavier ones though, and with a little over two minutes left, the champion dropped Faber hard with a right hand. Faber appeared to be out of the fight, but he quickly covered up and not only weathered the storm, but came back swinging as Barao tried to finish. Yet just when it seemed like Faber was out of the woods, Barao rocked him with another hard right. This time as Faber went to the mat, Barao fired off a series of unanswered strikes, prompting referee Herb Dean to stop the fight at 3:42 of the opening round. It was an unpopular call with the fans and with Faber, and even Barao was surprised with the call.

“A little bit,” said the champion. “Urijah Faber is very resilient and I knew it was going to be a tough fight.”

“It’s very frustrating,” added Faber. “I’m one of the most durable guys in the world. Herb is a great referee, but I would have liked to have more of a chance. I had more fight in me. Congratulations to Barao.”

And it was while it lasted, but when it was over, the word undisputed is without question the right one for Barao, who improves to 34-1 with 1 NC; Faber falls to 30-7.