Barao Back in Business, Subs Gagnon in Three 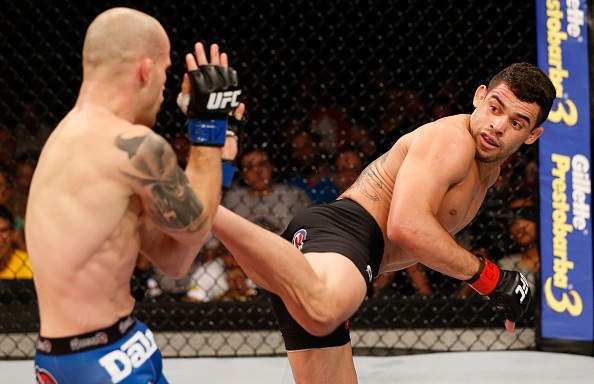 In Saturday night’s UFC Fight Night co-main event at the Ginasio Jose Correa in Barueri, Brazil, former UFC bantamweight champion Renan Barao got back in the win column in his first fight since losing his crown to T.J. Dillashaw in May, submitting Mitch Gagnon in the third and final round.

“I have one thing to say – I want my belt back,” Barao said.

Gagnon got off to a fast start, moving in and out and staying busy on the feet, but midway through the round, Barao began sitting down on his strikes, raising a welt on the leg of Gagnon with his thudding leg kicks. Gagnon landed his share of hard shots in return, but it was Barao who landed the biggest one of the round, dropping the Canadian with a left hook in the final minute.

The first three minutes of the second frame were slow, neither fighter gaining the advantage in any significant way. After a restart from referee Mario Yamasaki, the two exchanged punches briefly, only to wind up in a clinch against the fence once more, and that’s where they remained until the horn.

There were more action-killing clinches in the third, drawing boos from the crowd and another reset by Yamasaki. Midway through the round, the 27-year-old Barao scored a brief takedown, but Gagnon got up immediately. With under two minutes to go, Barao brought the fight back to the mat, and this time he finished, sinking in an arm triangle choke that Gagnon tapped out to at 3:53 of the final frame. 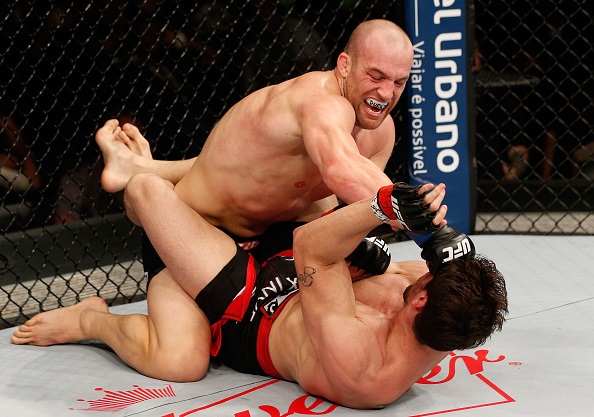 Cummins (7-1) sought a takedown as the fight began, but ate a right hand for his trouble. The two went on to clinch, Cummins eventually being able to trip his way to a takedown. Carlos (5-1) sought a leg lock and almost got it, but Cummins’ defense was solid and with two minutes left, he got free. Now it was the Californian’s turn to put his offense his gear with ground strikes, and he finished the round strong.

The bout stayed on the mat for much of round two, with Cummins dominating the action thanks to a smothering ground and pound attack, and the American didn’t let up in the final round. Carlos did threaten with a late takedown and he took his opponent’s back, but he wasn’t able to pull off the comeback submission. 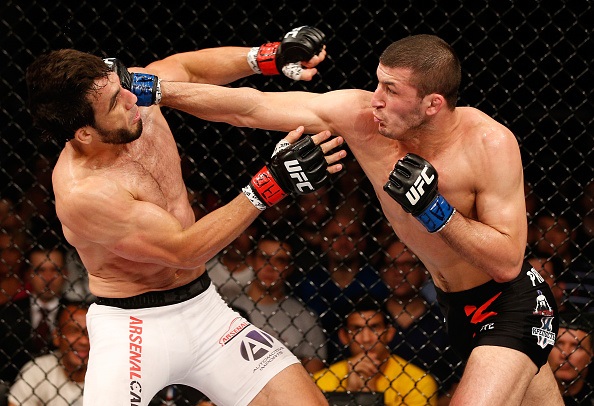 Russian lightweight Rashid Magomedov fought a disciplined, but effective, fight against Brazil’s Elias Silverio eventually turning on the heat late to secure a third round TKO victory and extend his winning streak to 11.

Silverio pushed the pace in the opening round, but it was the faster Magomedov who landed the more significant blows by far, even capping the first stanza off with a takedown.

A counter left hook by Silverio early in round two got him back on track, but Magomedov shook off the blow and got back to work against his much bigger foe. The kicking exchanges heated up as the round progressed, drawing roars from the crowd.

The pattern continued in the final frame, with Magomedov just one step ahead of Silverio, who couldn’t find the key to breaking the rhythm of the Russian up and comer, who punctuated his performance with a knockdown in the closing minute that led to a barrage of strikes and an intervention from referee Jerin Valel, who halted the bout at the 4:57 mark. 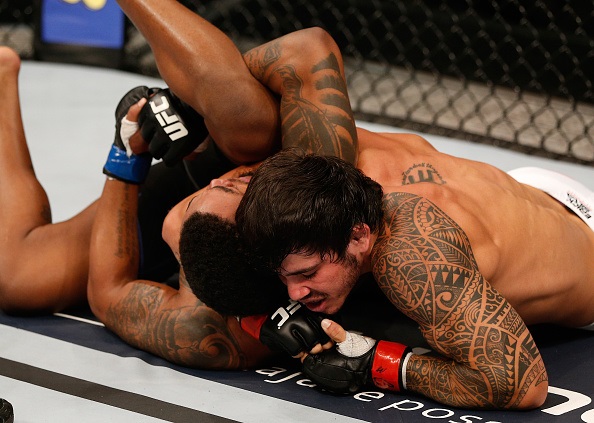 Brazilian welterweight star Erick Silva showed no ill effects from his May loss to Matt Brown, as he returned to the win column with a quick first-round finish of Mike Rhodes.

After a spinning back kick to start the bout, Silva sought a takedown and got it. Silva passed into side control within seconds and sunk in an arm triangle choke. The end came moments later, with referee Mario Yamasaki intervening at the 1:15 mark. 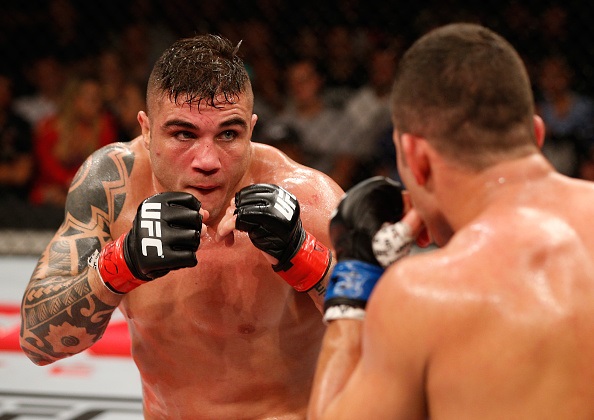 Former training partners and roommates Daniel Sarafian and Antonio Dos Santos were in the midst of an exciting middleweight bout before a bizarre ending resulted in a second round TKO win for Sarafian.

Clearly familiar with each other, neither fighter wasted any time getting down to business, each throwing hard shots from the outset. A minute and a half in, Sarafian landed with a head kick that looked like it would rock Dos Santos, but “Junior Alpha” instead responded with a right hand that dropped Sarafian. After a brief stay on the mat, the two rose, subsequently locking up against the fence for a brief spell before the slugfest continued. Dos Santos apparently had a chin of steel, as he took several flush punches, but he was slowing down by the end of the round.

In the second, Sarafian kept the pace high, but in the midst of an early exchange, Dos Santos appeared to dislocate his finger. As he turned away, he seemed to put it back in place, but by then referee Eduardo Herdy had called the bout. The official time was 1:01.

"I didn't know I was stopping the fight," Dos Santos said. "I felt my finger popping out, I put it back and tried to get back in the fight. Then the referee told me I asked the fight to stop and that the fight was over."

Sao Paulo’s Sarafian improves to 10-5; Salvador’s Dos Santos, who stepped in on late notice to replace the injured Dan Miller, falls to 6-2.