The UFC’s bantamweight division is one of the hottest, most explosive in the promotion right now, with a lot of distinct personalities making their play for seats at the elite table. And while the public conversation these days features frequent mentions of names like Sterling, Yan, Sandhagen and even O’Malley, veterans like Douglas Silva de Andrade are evidence that the next big threat might be hiding in plain sight.

Perhaps it was because only fought once in 2019 before he sat out all of 2020. Perhaps it’s the movement between the 145-pound and 135-pound divisions that have kept him out of the prognosticators’ calculations. Whatever the reason, he may have his fellow 135ers looking over their collective shoulder if he can extend his current two-fight win-streak in the same hellbent fashion Saturday when he meets Said Nurmagomedov on the main card of UFC Fight Night: Dos Anjos vs Fiziev.

“We're here to work.  We want to keep this momentum going. With this fight, I will have done three fights in less than ten months. Let's see if it's possible to have another one before the end of the year. It's in God's hands, but that's why we're here, to work and go to war.”

The current campaign to make up for lost time started when he returned to the Octagon—and returned to bantamweight—last October, when he promptly knocked out Gaetano Pirrello just over two minutes into the first round, earning both the win and a performance bonus. He’d follow that up with a Fight of the Night performance at UFC 271 that he ended in a second-round submission of Sergey Mozorov. The 37-year-old had always been a danger, but there has been an undeniable fire in his eyes lately. 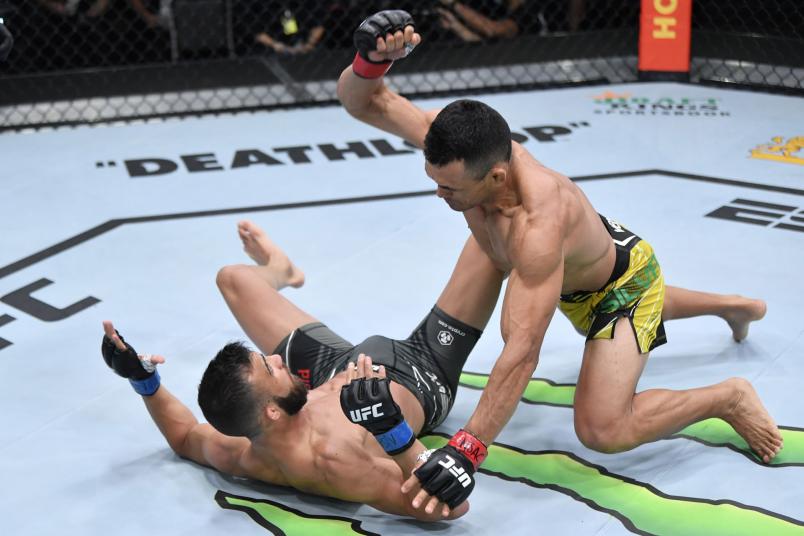 “It's not just one thing,” he explains of his visible mojo. “We've been trying to improve these things for a long time. It's something every high-level athlete wants.”

And the extra combined $100,000 for his efforts certainly didn’t hurt.

“It's the icing on the cake. I can only thank God. I don't have words to describe it. To be able to give a better life to my mom and adapt her house so there's better wheelchair access for her. And also, my wife and my daughter, to give them a better life.

“My daughter is a blessing from God. I was always away for the camps and I wasn't there when she was born, but then God gave us this gift. But after the storm, comes a calm. So it's very rewarding. God has gifted us with these two bonuses. We went there, worked hard, believed, took risks. We've received this blessing and I can only be thankful. It has helped me provide a better life for my family.” 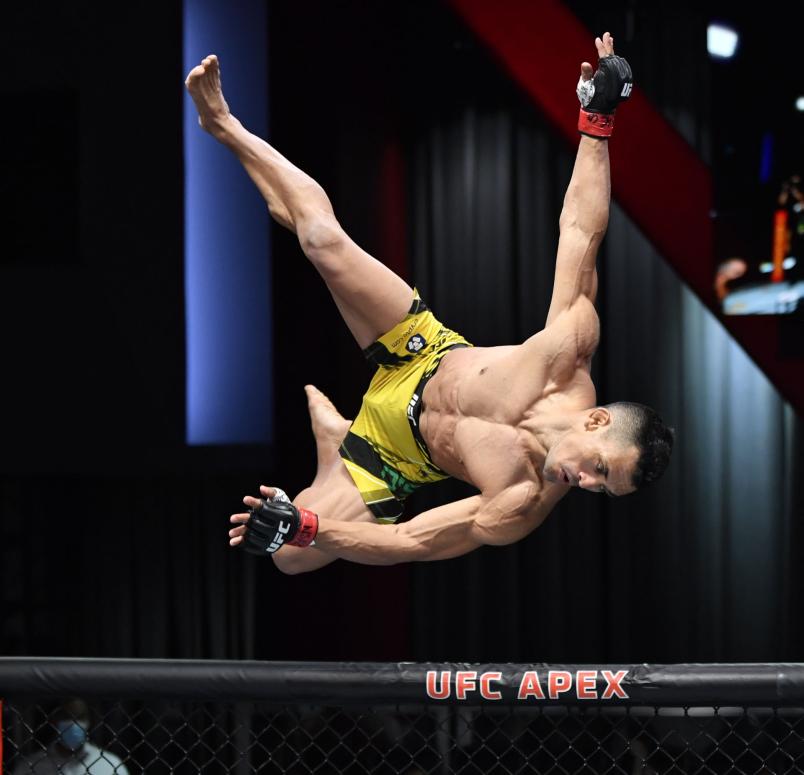 Douglas Silva de Andrade of Brazil celebrates his KO victory over Gaetano Pirrello of Belgium in their bantamweight bout during the UFC Fight Night event at UFC APEX on October 02, 2021 in Las Vegas, Nevada. (Photo by Jeff Bottari/Zuffa LLC)

Since going pro in 2007, the Muay Thai expert has compiled an impressive 28-4, 1 NC record that includes wins over Marlon Vera and former champ Renan Barao. Although difficult weight cuts have hindered his consistency in the past, his newfound alliance with The UFC Performance Institute has worked to make them a thing of the past in hopes he can capitalize on his potential.

“Vegas is like my second home. Soon, I'll be able to live and spend more time here. I'll always go back to Brazil, to my roots, and then come back and train here. I’m really enjoying it here, the schedule, the training, and adapting to everything.” 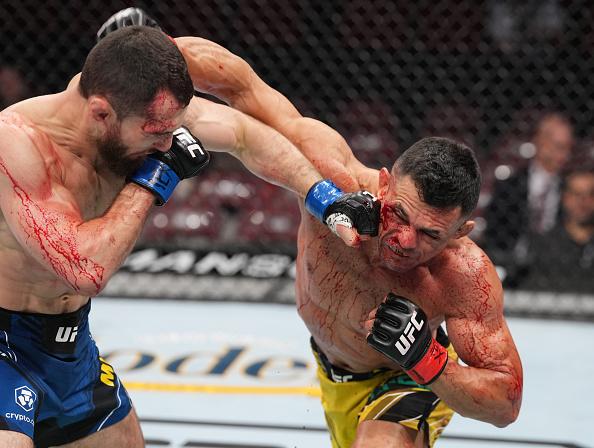 Any extra support is bound to come in handy vs the 15-2 Nurmagomedov, who brings all the elite Dagestani MMA that his last name would imply.

“The level is getting harder and we all study each other. We've studied him and his game.

He's a good opponent and I'm thankful to him for being my opponent because we need that to work. Another tough guy and I'm thankful for that. No excuses, we want high-level opponents like him because it will help us get to the top.

“I just want to put on an amazing fight so we can get more fans interested and so that the UFC can recognize more and more the work I've been doing for a long time and, obviously, to go after the gold. That's our goal.”