The entire mixed martial arts world is eagerly anticipating this Saturday’s UFC 217 co-main event between bantamweight champion Cody Garbrandt and former titlist TJ Dillashaw. But there will be one person watching it a little more intently than most, and that’s because Jimmie Rivera hopes to be in the Octagon with the winner sometime next year.

It’s a pretty crazy scenario for a fighter who was simply waiting for a call from the UFC at this time in 2014. But New Jersey’s Rivera always knew he would eventually make it to this point.

“I knew one day I would be here, that all that hard work would pay off,” he said. “It is crazy, but with all the work I’ve put in, it’s well deserved.”

With a 16-1 record that included 15 consecutive wins, Rivera finally got his UFC shot in July 2015, and he hasn’t looked back since, running off a 5-0 record in the Octagon. In his last two wins, he defeated Urijah Faber and Thomas Almeida, setting the stage for a UFC 219 fight against former champion Dominick Cruz this December.

With a win over Cruz, Rivera may very well be seeing a title fight next, which makes Saturday’s outcome all the more intriguing for the 28-year old, who has a unique perspective on the bout, considering he’s talking about his peers.

“Honestly, I think TJ is a really good athlete and I think Cody’s the better fighter of the two,” he said of the matchup. “But it’s going to be an interesting fight just because they sparred each other when they were training together. I just read something about Cody where he was talking about sparring him when TJ was the champ, and he said if he could beat up TJ, then he could be the champ.”

Rivera has been in that situation himself, ironically with Dillashaw and his former teammate, UFC Hall of Famer Urijah Faber.

“I wasn’t in the UFC yet, my teammate (Louis Gaudinot) was fighting Tim Elliott at 125 (in Milwaukee), and I got to train with them and it was a big eye opener,” he said. “I thought these guys were so good and on a different level, and I was on that level. I’m thinking in my head, ‘This is crazy, I’m even better than them.’ So that was a big confidence booster and I could relate to Cody and what he said. People forget that we have two arms, two legs and we bleed the same color. There’s nothing special about us. It all comes down to mentality and our skill level.” 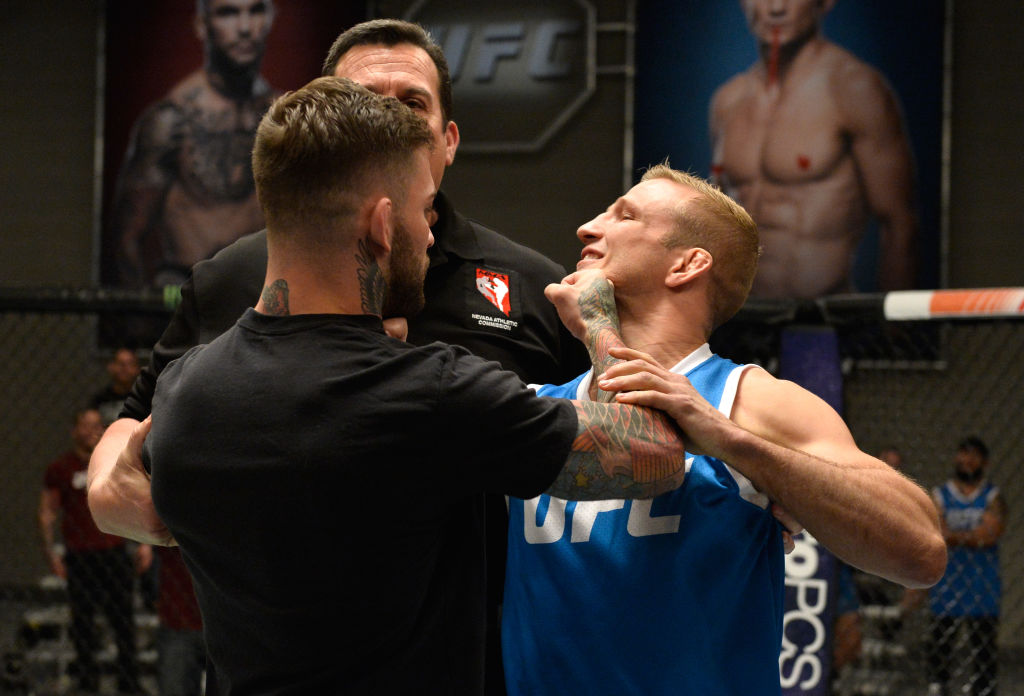 Of course it brings up the question of how hard Garbrandt and Dillashaw were going in sparring when they were both members of the Team Alpha Male squad, and whether practice is just practice.

“There’s only a little difference between the gym and going out and fighting,” Rivera said. “And from what I’m reading and heard about TJ, he’s a person that wants to win all the time in the gym and wants to be the one who beats everybody in the gym. Listen, you’re going with some random guy, even in our school, I’m gonna try to choke him out if we’re grappling or I’m gonna try to hurt him if we’re kickboxing. I’m not gonna let him get the best of me, and then it becomes competitive.”

Garbrandt and Dillashaw certainly fit that description of competitive, and when you add some animosity to the mix, you have to wonder if emotions will get the better of one or both of the combatants this weekend.

“There’s definitely a grudge between those two,” Rivera said. “How far or how deep it goes, I don’t really know, but it should be interesting to see if the emotions will come up in the fight. I thought when Cody fought Dominick (Cruz) that he was going to get emotional and start to mess up. But he kept himself really composed and he didn’t. It was unbelievable and I thought it was really good that he was able to do that.”

So will that be the difference maker? Maybe, but even taking emotions out of the equation, Rivera is pretty confident in his pick for the Garbrandt-Dillashaw showdown.

“I think it’s gonna be Cody,” he said. “I think he’s gonna be bigger in size and he’s the better striker of the two. The biggest challenge is gonna be stopping TJ’s takedowns because besides that I don’t think TJ has that much to offer in the fight.”