Back in the Octagon for the first time since May of 2012, Seoul middleweight Dongi Yang got his hometown fans up and roaring at the Olympic Gymnastics Arena Saturday, finishing off the preliminary portion of the UFC’s first event in South Korea with a second-round knockout of Jake Collier.

There was solid back-and-forth action throughout the first round, but Collier held the edge thanks to a knockdown scored in the second minute of the frame.

A scramble to the mat early in the second round saw Collier nearly sink in a guillotine choke but Yang escaped and went on the attack with ground strikes. Collier attempted a leg lock in response, but when that failed, Yang’s unanswered barrage of punches brought referee Herb Dean in to stop the fight at 1:50 of Round 2. 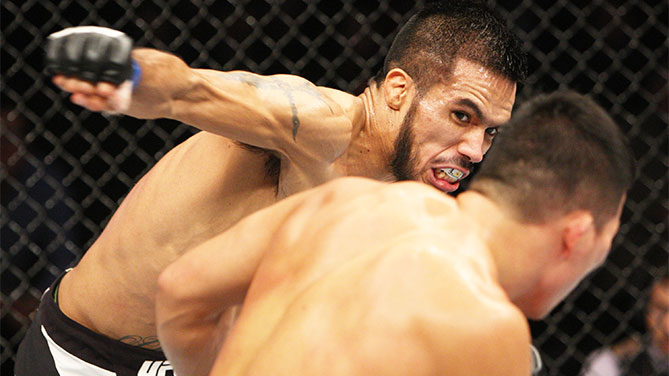 Featherweight prospect Mike De La Torre was matador to Yui Chul Nam’s bull throughout their three-round bout, with the result being a split decision victory for “El Cucuy.”

“The Korean Bulldozer” lived up to his nickname as soon as the fight began, as he forced De La Torre into the fence in search of a takedown. De La Torre wasn’t playing along though and some heated exchanges ensued, the Glendale, Arizona product winning those exchanges with sharp shots that bloodied his foe’s face. Nam’s granite chin served him well and he kept seeking the takedown, but again, De La Torre refused to go down, and when he got daylight, he fired away with power shots.

Nam wasn’t deterred from his plan of attack in Round 2 but it just wasn’t working as he couldn’t get De La Torre to the mat. Midway through the round, referee Leon Roberts restarted the action after a stall against the fence, and that allowed De La Torre to tee off with his shots. Nam took them all though, and as soon as he got close, it was back to takedown attempts and fence control.

A caught kick by Nam finally allowed the Seoul product to get the fight to the canvas in Round 3, but De La Torre got back up as soon as he hit the deck. Nam’s insistence on getting the takedown was impressive, but there was little in the way of a Plan B, so when Roberts restarted the fighters, it was De La Torre doing damage with his strikes over and over. 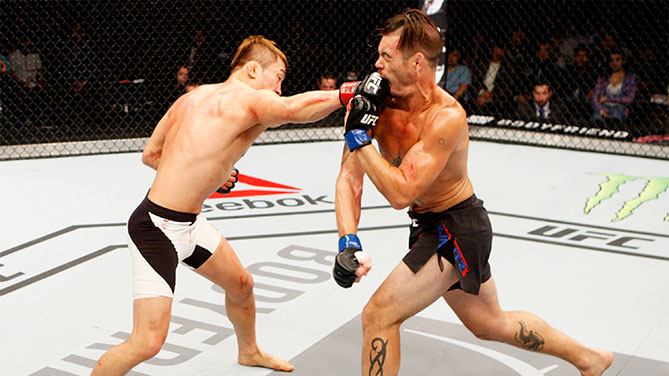 The fight heated up immediately with a furious exchange of strikes leading to a left hook by Bang that dropped Kuntz. The American tried to recover, only to get caught in a guillotine choke. Again, Kuntz avoided trouble, and as the dust settled Bang had a nasty cut under his left eye. As the round progressed, Bang opened a cut over his opponent’s right eye and landed some hard strikes but Kuntz got in his share of blows just before the end of the round to even the score.

The bombs kept flying as the second round commenced, Bang holding the edge with a jarring right hand. Kuntz shot in for a takedown on the winded Bang, but the Seoul native wouldn’t let him get it, opening up the striking game once more. With a little over two minutes remaining, Kuntz finally got his takedown, and he went on the offensive, sinking in a rear naked choke. Bang patiently fought his way free, but as he rose, his exhaustion was evident.

Kuntz got a takedown in the second minute of Round 2, but as he did, Bang locked in another guillotine. With Bang lacking the energy to finish, Kuntz slipped free, but referee Steve Perceval restarted the fighters on the feet moments later. The gutsy Bang got a takedown as the final minute approached, but Kuntz got up immediately and the fighters proceeded to keep it standing for the final seconds of the thrilling lightweight bout. 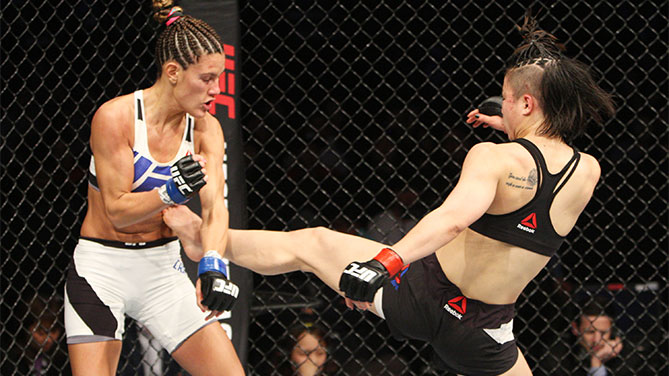 The first South Korean woman to compete in the UFC became the first to win in the UFC, as Seohee Ham won an exciting three-round unanimous decision over Cortney Casey.

It was an exciting - but one-sided - first round, with Casey outworking Ham throughout the frame and avoiding any significant damage in close range exchanges. The right hand was Casey’s primary weapon, but a right kick to the head with a little over two minutes to go jarred Busan’s Ham.

Casey scored a flash knockdown in the second minute of Round 2, but a subsequent eye poke by Ham halted any momentum the American was putting together. When the bout resumed, Ham settled into the role of aggressor, and she began having more success than in the previous round. A low kick by Ham forced another break late in the frame, but this time Casey was able to finish strong, rocking Ham with a right before the horn.

Ham landed a hard left that hurt Casey as the third round began, and the South Korean star kept the heat on as Casey tried to fight her way out of trouble. Ham’s body attack was really paying off at this point, forcing Casey to clinch, and her late surge proved to be the difference in the fight, as she took the close, but unanimous, decision. 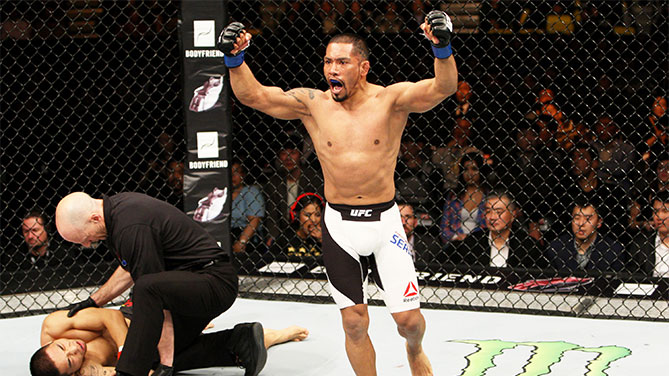 A flyweight bout between former Colombian Olympian Freddy Serrano and China’s Yao Zhikui met an abbreviated finish when an injury ended Zhikui’s night in less than a minute.

After a brief feeling out process, Zhikui went on the attack, but Serrano countered with a takedown. As Zhikui looked to break his fall with his right arm, the arm dislocated, and referee Greg Kleynjans caught it immediately, intervening at the 44-second mark. The winner by TKO is Serrano, who improves to 3-0. Zhikui falls to 2-4. 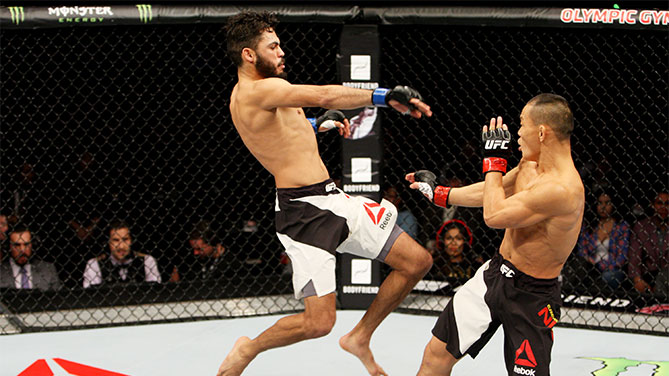 There was little scoring of note in the first round until the final seconds, when Guangyou landed a hard left to the body and Beltran responded with a takedown. The fighters did up the pace to start the second though, Guangyou getting in Beltran’s face and ending up on top as the two tumbled to the mat. There were some striking exchanges on the mat, but referee Steve Perceval restarted the fight midway through, putting the fighters back on their feet, where the bout stalled again.

With Guangyou started to pull ahead with his aggression in the third, Beltran finally responded late in the final round with some hard knees from the clinch. The action was still too sporadic and the fans let them know it as the bout ended. 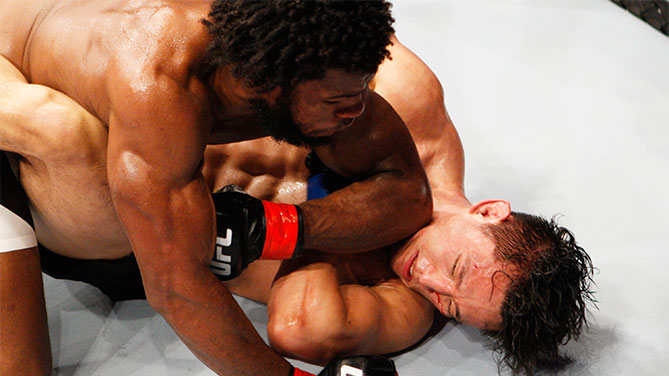 Cincinnati’s Dominique Steele picked up his first UFC victory in the welterweight opener, knocking out newcomer “Maestro” Dong Hyun Kim early in the third and final round.

Thirty seconds into the fight, a left hook by Steele rocked and dropped Kim. The Busan native jumped up immediately, got free and fired off a kick to the head to further distance himself. A grappling battle ensued for a spell before two traded close range elbows and then scored with a second takedown. Kim, who took the fight on short notice, replacing the injured Hyun Gyu Lim, was as game as they come though, and he again fought his way to his feet and reengaged, drawing a pop from the crowd with ever punch and kick he threw.

Steele wasted no time getting a pair of takedowns to begin Round 2, and the Ohio product kept his opponent there for the rest of the frame, opening up a cut under Kim’s left eye with his ground-and-pound attack in the process.

Kim landed a right hand as Round t3 began, but a subsequent slam from Steele ended the bout, as Kim’s head bounced off the canvas and turned the final elbows into mere window dressing. The official time of Leon Roberts’ stoppage was :27 of round three.