Some sacrifices a fighter makes are obvious. Others are hidden, with only the man who makes that walk knowing what it took to get there.

For Humberto Bandenay, who makes his Octagon debut this Saturday against Martin Bravo, the obvious sacrifice was leaving friends and family in Lima, Peru to chase after the dream of becoming a UFC fighter.

“I love where I’m from, but I felt like I needed to be in a state and country where MMA is advanced, so coming to Team Oyama was definitely necessary for my fighting career,” said Bandenday of training in Southern California. “Team Oyama is the perfect place for me. My training partners and coaches are so advanced and it’s a great team to be on because everybody is there to get better and help their teammates get better too.”

Fighters like Bandenay have little choice but to move if they want to get better and get noticed. Currently, only Enrique Barzola and Claudio Puelles join Bandenay as Peruvians on the UFC roster, and while the country has been the longtime home of bantamweight contender Valentina Shevchenko, she’s even taken her show on the road to prepare for recent bouts.

“It’s very difficult, because the only famous sport there is soccer,” Bandenay said. “Everyone just concentrates on soccer (laughs), and nobody really pays attention to MMA so there aren’t very many opportunities. But I believe myself and a few other fighters are making more people pay attention, making it quite a bit more popular.”
MORE FROM FIGHT NIGHT MEXICO CITY: Fantasy Preview | Pettis to make growing pains thing of past | Three fighters On the Rise

Bandenay (13-4, 1 NC) can do his part in Mexico City against the unbeaten and favored Bravo. It’s a fight the 22-year-old didn’t get a full training camp for, and that’s another obvious sacrifice he had to make. The hidden one was that in early July, as he was training for another bout, he was told that his ill father was close to death. Bandenay packed his bags and got ready to cancel the bout and go home, only to be told by his father to stay and fight.

He listened to his father, who passed away a short time later. Soon, Bandenay got the call for his UFC debut. 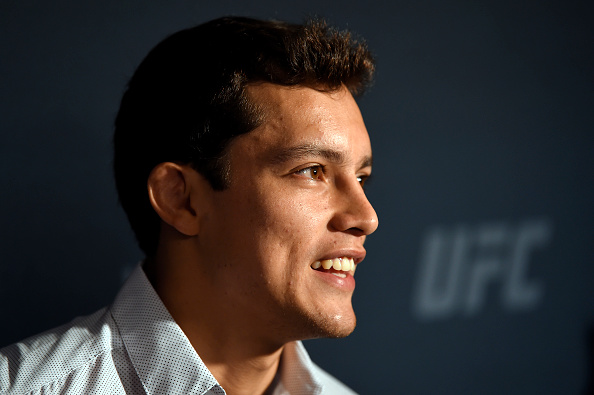 “In the beginning of my career, he wasn’t a fan of it,” Bandenay said of his father. “But like a lot of people, as he saw the hard work that I was putting into it, he slowly but surely became my number one fan. He wanted me to train as hard as I can and become the best that I possibly could.

“It was very difficult after his passing because I wasn’t there. It was very hard to train, knowing that my family was in pain and that I couldn’t be there for them. He has certainly become my number one motivation as a fighter, and as a man, and this victory will be dedicated to him.”

With that kind of motivation, game plans, strategies, opponents and fighting away from home are factors that really don’t matter anymore, and Bandenay admits it. He’s just focused on winning and doing what is necessary to get that result. Martin Bravo is just a name on a bout sheet.

“I just see him as another step in my journey to becoming the fighter and human being that I want to be,” he said. “I’m not concerned about his career or anything that he has going on on his side. All I’m concerned about is getting the win, so I’m strictly focusing on myself, my own training and what I’m going to do when I step into the Octagon this weekend. He’s just another fighter that I have to beat. I’m going to confront him and I’m going to win. August 5th is the day that I get that victory. I wish him all the best, but this is my time.”