Bamgbose believes his time is 'now or never'

For one of the most positive and upbeat fighters on the UFC roster, the last 12 months had to be tough to deal with. But Oluwale Bamgbose still found a way to turn his fistic lemons into lemonade.

“It was more of a positive thing because I was able to get better,” he said of a stretch that saw him lose a short-notice fight to Cezar Ferreira, see two December bouts get scrapped, and then as the capper, see a London fight with Tom Breese fall apart…on the day of the event.

And after all that, is he still positive?

“I was able to sew the holes in my game during this off time and make my ground game as good as my standup,” he said. “And I had a few nagging injuries that I was able to get better and get out of the way as well.”
Get ready for UFC 212: 5 Reasons to Watch | Extended preview | UFC 212 Countdown | Under-the-radar fights to watch | Pre-order UFC 212 on-the-go | Get PPV ordering instructions

This Saturday, the “Holy War Angel” will be in Brazil, and all signs are saying that his UFC 212 main card matchup with Paulo Borrachinha will proceed as scheduled. So if the 29-year-old New Yorker can look at his last 12 months and see the bright side of things, imagine how amped up he is now. And he is. So even though he can be thoughtful and detailed in his explanation of the fight game, at others, it’s almost as if he channels the late Randy “Macho Man” Savage to give his prediction on the Borrachinha fight.

“Whoever the UFC gives me, I compete against, and I go in there and do my best to decapitate and ultimately win,” he said. “The goal is to win, my job is to win, and that’s what I’m there to do, June 3rd in Rio.”

It’s a response that is met with silence, as there is nothing else to say after something like that. Then Bamgbose laughs, happy to be here and eager to make a mark that goes beyond what happens on fight night. He’s got that star quality. Now all he has to do is win the fights. Thus far, the UFC record stands at 1-2, but it was that first loss in his 2015 debut against Uriah Hall that he believes turned everything around for him.

“My game wasn’t complete,” he said. “When I fought Hall, I had been on the ground, but usually I was the guy on top or I got right back up. When he took me down, I couldn’t get back up and then he TKOed me and it was my first time getting hit by a solid 185er. It was like a mountain hitting me in the face and crushing my face. So I was able to get used to that. And then I started to train with other bigger bodies, so my body, my mind and my physique can handle that. And why even get hit at this point, now?” 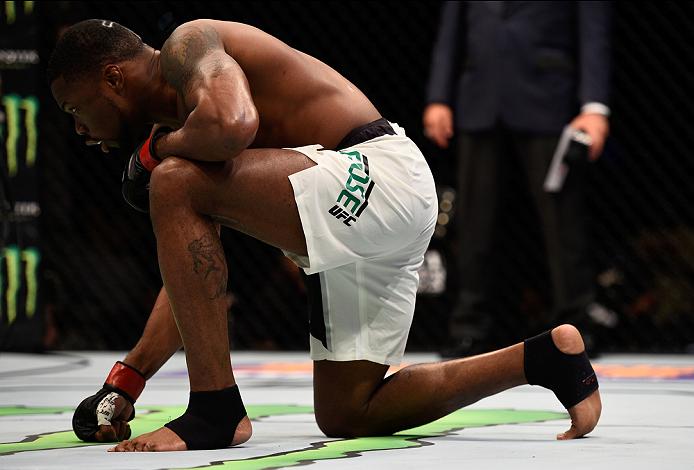 Six months after losing to Hall, he took a minute to knock out Daniel Sarafian. The loss to Ferreira was a setback, but considering that he took it on short notice and was performing well before running out of gas, it’s almost a wash. So Saturday’s bout against Borrachinha may be the most important of Bamgbose’s career, but it’s also one being held in hostile territory against a Brazilian fighting in Rio.

Bamgbose, who has a Black Prajied in Chute Boxe Muay Thai under Luiz Azeredo, begs to differ.

Who knows, maybe they’ll boo the other guy this weekend. But no matter who gets the cheers in Rio, Bamgbose will be showing up for a win and nothing else.

“It’s now or never, it’s now or devastation,” he said, roaring back into Macho Man mode. “It’s either I accept my destiny or I accept nothing. I’ve tasted that, it does not taste good, it’s not fitting at all, and I’m sick of it. I’ve starved, and because of starvation, it has made me hungry. And I need this and I want this and I’m gonna win. I’m not gonna lose again.”

Sounds like a man with a lot of faith.

“Faith is great,” Bamgbose said. “But if you don’t apply the work, it’s useless. That’s what I learned.”