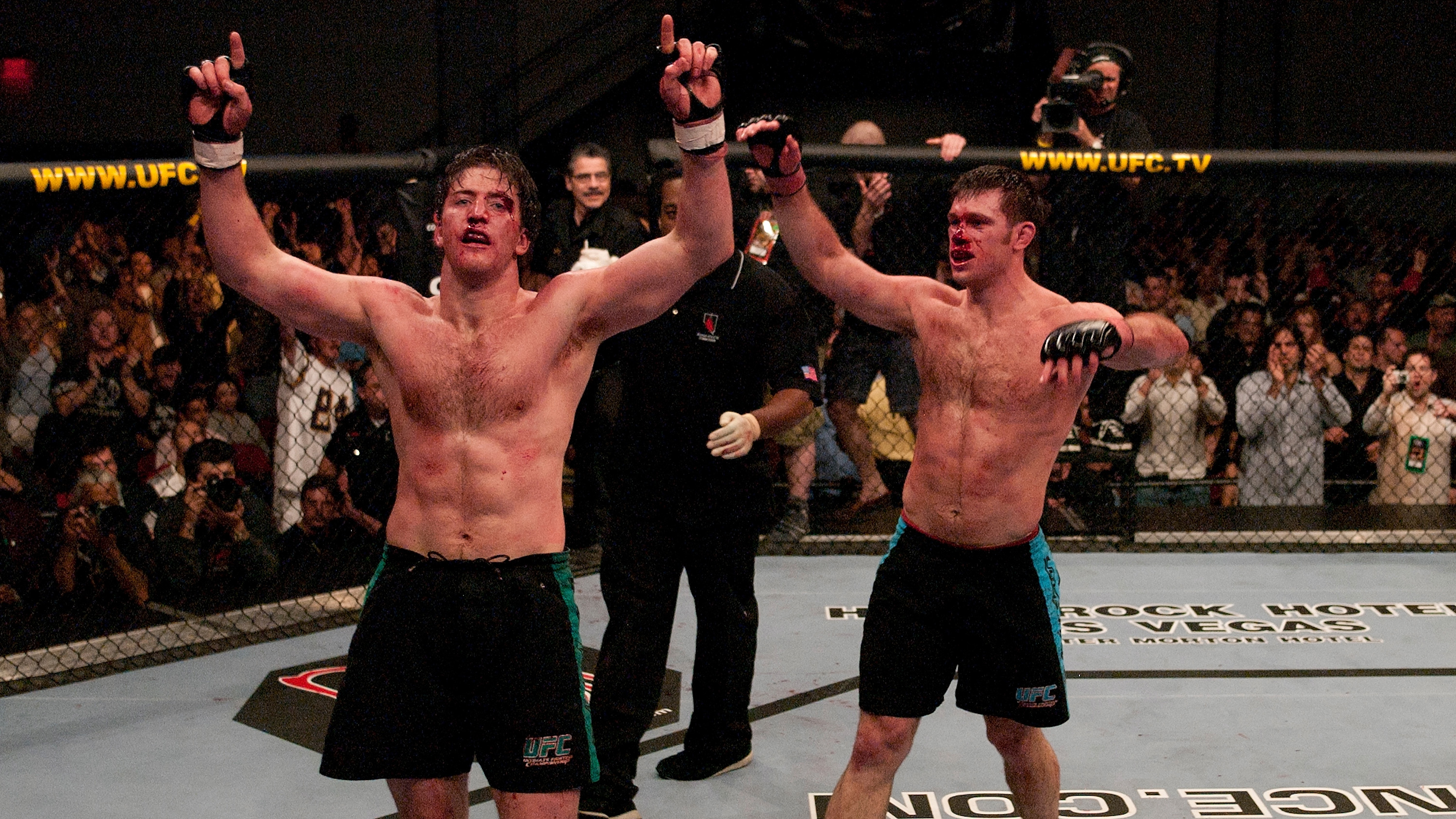 Next week, the eyes of the mixed martial arts universe will be on Las Vegas, as UFC International Fight Week takes over the Fight Capital of the World for several days, celebrating the sport and culminating in The Ultimate Fighter Finale on July 7 and UFC 213 on July 8. To get ready for IFW, let’s look back at thirteen of the UFC’s most memorable moments in Las Vegas.

2004
UFC 47
In 2004, the biggest fight in UFC history to date was the showdown between former training partners Chuck “The Iceman” Liddell and Tito Ortiz. Though the light heavyweight title wasn’t on the line, the two rivals fought as if there was even more at stake, but it was Liddell emerging victorious in the first of their two bouts via knockout. (Watch on UFC FIGHT PASS)

2005
Griffin-Bonnar I
No one knew it at the time, but the Ultimate Fighter 1 Finale bout between Forrest Griffin and Stephan Bonnar became the most important fight in UFC history. Featuring fast-paced action for three five-minute rounds, Griffin and Bonnar helped kick off the MMA explosion in the United States that soon went worldwide. (Watch on UFC FIGHT PASS)

2008
Griffin-Jackson
The UFC 86 battle between Forrest Griffin and Quinton Jackson in July of 2008 was everything you hope a championship fight is, and for five rounds, the two light heavyweights fought as if more than just a belt was on the line. Filled with knockdowns, tactical stalemates, bone-rattling power shots, submission attempts, and drama, this fight had it all. When it was all said and done, Griffin walked away with a hard-fought five round unanimous decision that cemented his place in the sport as a world champion. (Watch on UFC FIGHT PASS)

2009
UFC 100
The UFC pulled out all the stops for this historic event in Las Vegas, with the first UFC Fan Expo preceding the event at the Mandalay Bay Events Center. Featuring two title fights and a bout between Dan Henderson and Michael Bisping, the card saw Brock Lesnar retain his heavyweight title by defeating Frank Mir, and Georges St-Pierre did the same at welterweight when he beat Thiago Alves. (Watch on UFC FIGHT PASS) 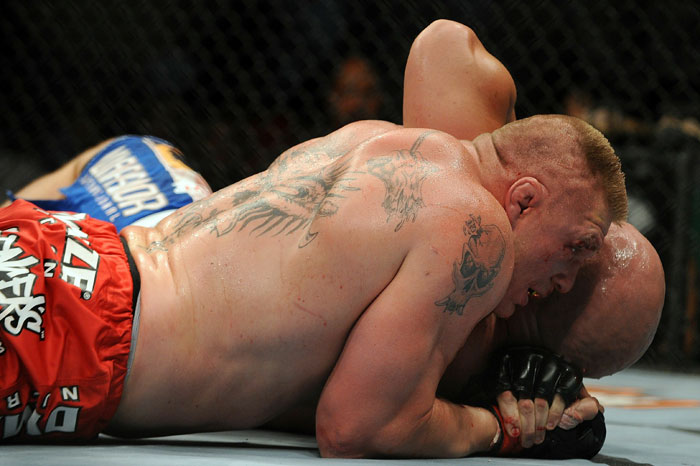 2010
Lesnar-Carwin
If you happened to doubt the punching power of Shane Carwin, it didn’t take long for you to become a believer in July of 2010, as he cracked Brock Lesnar in the first round and proceeded to lay down a hellacious beatdown on the then-heavyweight champion. It was a stunning turn of events that was topped by Lesnar’s ability to weather the storm to make it out of a round he had no right surviving. Then, as the bell was about to ring for the second round, he smiled at Carwin just before taking his exhausted challenger down and submitting him with an arm triangle. (Watch on UFC FIGHT PASS)

2011
Cruz-Faber II
The grudge between bantamweight stars Dominick Cruz and Urijah Faber was real, so before their UFC 132 main event in July of 2011, there was a fear that the fighters wanted so badly not to lose to their rival that they would be too cautious. Not a chance. Instead, Cruz and Faber fired off all their tricks at one another, fought at the insanely high pace 135-pounders are known for, and gave the fans a 25-minute fight to remember that Cruz won by unanimous decision. In the process, “The Dominator” evened the score with the first man to beat him. (Watch on UFC FIGHT PASS)

2012
Silva-Sonnen II
For pure drama, the rematch between middleweight boss Anderson Silva and number one contender Chael Sonnen at 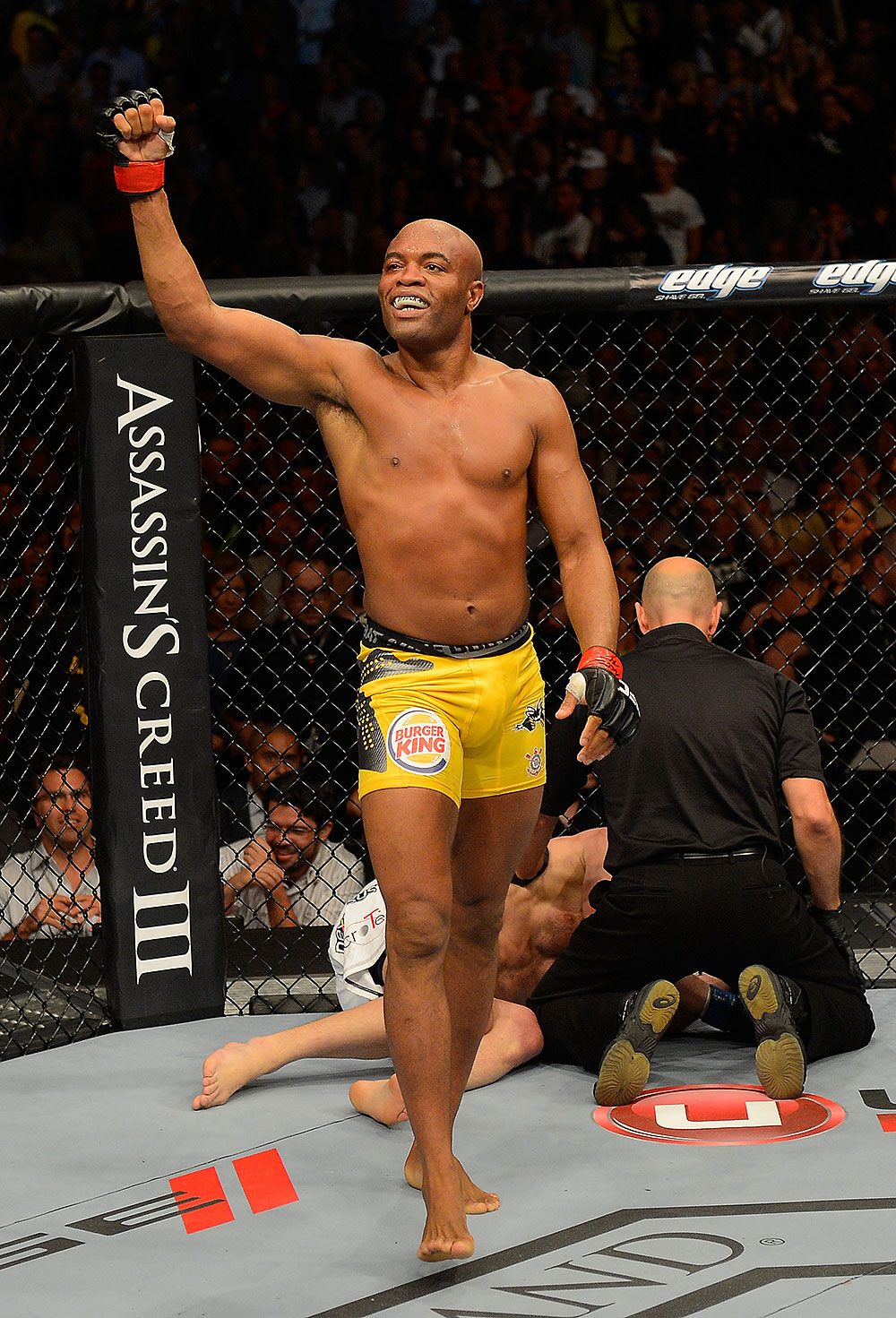 UFC 148 in July of 2012 was hard to top. The build up to the fight was epic, and as soon as Sonnen took Silva down seconds into the bout, the crowd at the MGM Grand Garden Arena erupted and the fans didn’t stop until the end came in the second round with Silva on top via TKO. Nearly two years of anticipation preceded this championship match, and the end result lived up to the expectations. (Watch on UFC FIGHT PASS)

2013
Weidman-Silva I
Despite facing a man who had shattered record after record, earning him accolades as the greatest fighter in mixed martial arts history, unbeaten Chris Weidman just knew he could beat fighting icon Anderson “The Spider” Silva. And in the main event of UFC 162 on July 6, 2013, the New Yorker did just that, making history as he knocked out the seemingly invincible Brazilian in the second round to shock the world and win the UFC middleweight championship. (Watch on UFC FIGHT PASS)

UFC 167
Celebrating the UFC’s 20th anniversary, longtime welterweight champion Georges St-Pierre battled through one of the toughest fights of his reign against power punching challenger Johny Hendricks. After five hard-fought rounds, St-Pierre retained his title and Hendricks gained the respect of his opponent and fight fans around the world. It also might have been the last time we saw St-Pierre in the Octagon, as he announced his hiatus from the sport a month after the bout. (Watch on UFC FIGHT PASS)

Rousey-Tate II
The rematch between Chris Weidman and Anderson Silva may have been the UFC 168 headliner on this night in December, but it was Ronda Rousey and Miesha Tate stealing the show in the co-main event. Defending her title in Las Vegas for the first time as a UFC fighter, Rousey was pushed further than she had ever been by an opponent, as longtime rival Tate took her into the third round. But the result was the same – a finish by Rousey, this time with her trademark armbar. (Watch on UFC FIGHT PASS)

2015
Jones-Cormier I
The rivalry between Daniel Cormier and Jon Jones will be settled at UFC 214 on July 29, but it was in January of 2015 that these light heavyweight rivals first threw hands in Las Vegas after a heated build-up that captivated the sports world. When the dust settled the first time, it was Jones emerging with a decision victory, but a lot has changed in the ensuing two and a half years, so there’s no doubt that the world will be watching once more next month. (Watch on UFC FIGHT PASS) 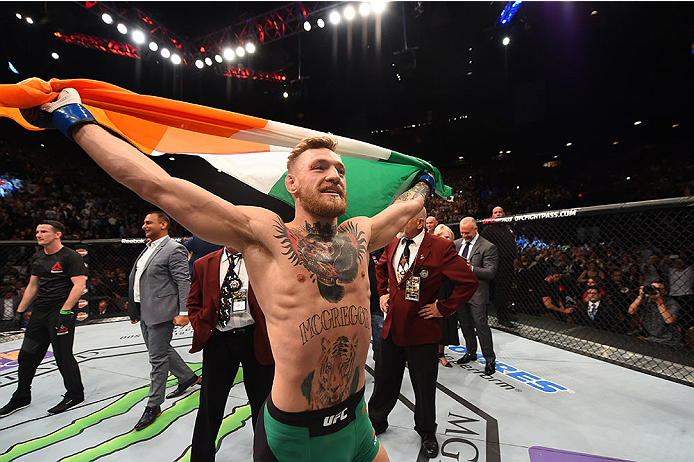 McGregor-Aldo
No fight in recent history has had more heat behind it than the featherweight title fight between Jose Aldo and Conor McGregor. It was a UFC 194 event that came complete with a worldwide media tour, a postponement and finally, a fight. And while the MGM Grand bout only lasted 13 seconds, with McGregor stunning Aldo to take the undisputed 145-pound crown, no one who was in the arena that night will never forget what happened in the historic showdown that crowned McGregor king. (Watch on UFC FIGHT PASS)

2016
McGregor-Diaz II
The first bout between Conor McGregor and Nate Diaz was put together at the last minute after Rafael Dos Anjos was forced out of his bout against “The Notorious” one due to injury. What followed was a thrilling UFC 196 main event that saw Diaz upset McGregor via submission. Five months later, they did it again at UFC 202, and with the proper lead time to build the fight at T-Mobile Arena, it was massive, bringing in not only UFC fans, but all sports fans and fans that just wanted to be part of the event. In the fight, McGregor evened the score with a close decision win over Diaz, adding to his resume as one of this era’s premier prizefighters. (Watch on UFC FIGHT PASS)