Bahadurzada Fights for Something More

"I want to put on a show and I’m going for two bonuses if possible – Fight of the Night and Knockout of the Night." - Siyar Bahadurzada 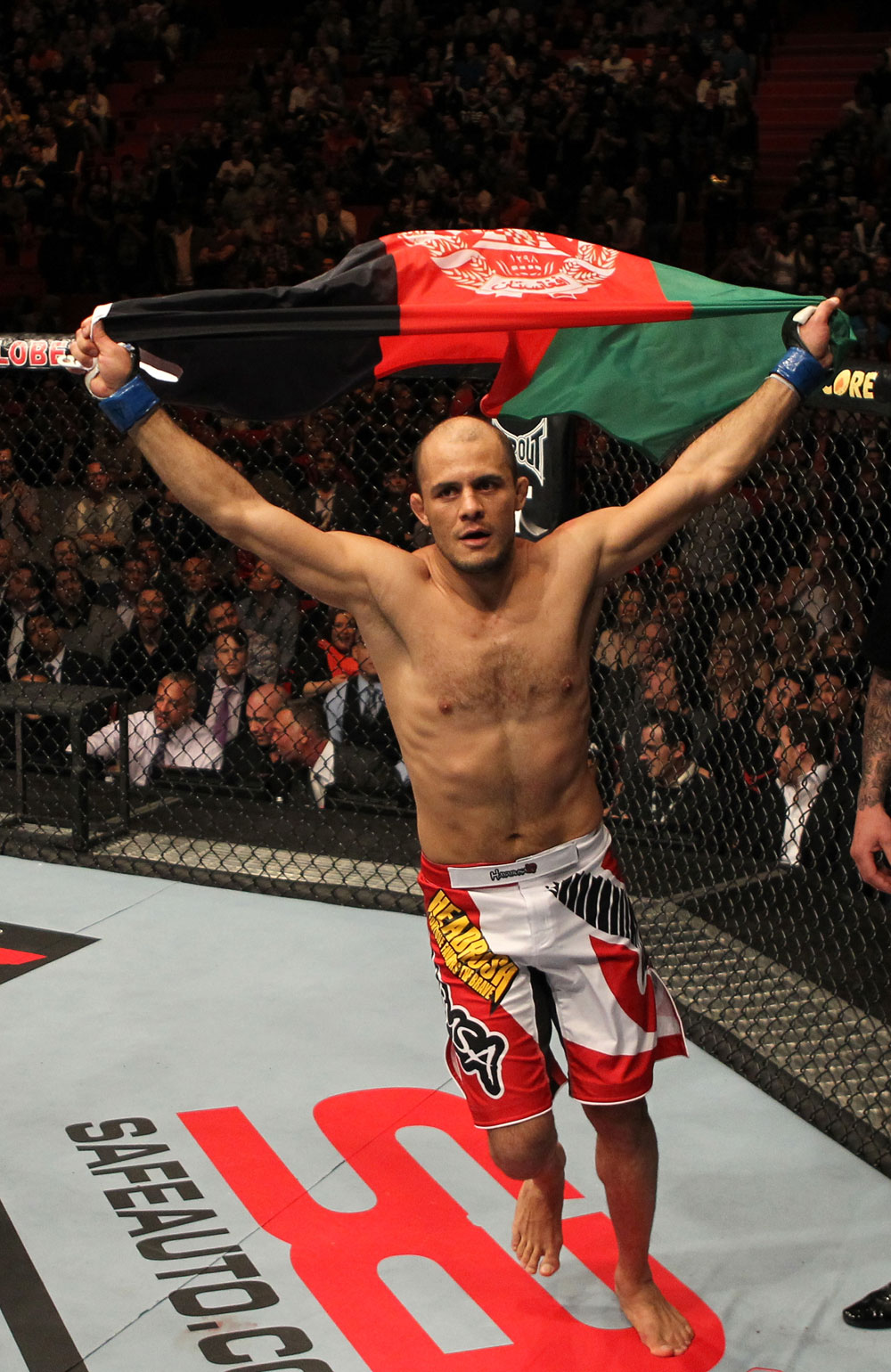 The cardinal sin for any fighter is to look ahead to Sunday before Saturday night’s business is taken care of, but as far as Siyar Bahadurzada’s plans for after his UFC 168 fight with John Howard this weekend go, we’re willing to give him a pass.

“With my fight purse, including any bonuses, I’m going to fly to Afghanistan and help the kids over there,” said the Kabul native. “I’m going to spend this money buying shoes and jackets for those little kids. I’m pretty sure they need it more than I do, and I’m pretty sure it will save a lot of lives.”

It’s not what you usually hear from a prizefighter regarding the plans for his paycheck after a grueling camp and often an equally taxing fight. But Bahadurzada isn’t your typical fighter. The first Afghan athlete to compete in the UFC, the 29-year-old doesn’t just fight for himself, the money, or the glory, though all of those things are nice. He fights to be an example and an inspiration, and one look at the support he gets on social networking sites before every bout shows that he is most certainly making an impact.

“My people know my emotions are sincere,” he said. “They see me fight for Afghanistan, they see me go through hell for Afghanistan, they see that I love them and I fight for them. It’s not the money that motivates me. I’m the only Afghan (in the UFC) and I would like to represent Afghanistan and my people in a positive way. I want to show an Afghan heart and the warrior spirit of Afghans, and eventually open doors for other UFC Afghan fighters in the future. And I’m honored to be that first UFC Afghan fighter to show people my heart and my technique. So this drives me to work hard, fight harder, and give those little kids who are coming up a chance.”

His goals are so admirable that it’s easy to forget that he’s an unrepentant knockout artist when the Octagon door shuts, and that part of his person has established a following that includes more than just fans from Afghanistan. Yet while he lived up to his advance billing in his UFC debut in April of 2012, blasting out Paulo Thiago in 42 seconds, his next bout in March of this year saw him outwrestled for three rounds by Dong Hyun Kim. Yet if you think this defeat caused him more than a few sleepless nights, think again.

“The thing is, I am not afraid of wrestlers, and I am not afraid of being taken down,” said Bahadurzada. “The fight with Dong Hyun Kim, he beat me fair and square, and I’m not going to make any excuses about that fight. He was the better man that day, but if we ever square off again, the outcome might be different. That being said, I like to strike, I like to fight, and I love fighters who come to fight.”

So it was a good day for Bahadurzada and his welterweight peers when Georges St-Pierre announced that he was vacating the welterweight title in order to take a hiatus from the sport. Not because GSP was leaving, but because it opened up the division in a way that a few solid wins could move a fighter into the title picture a lot quicker. And for Bahadurzada in particular, seeing that sluggers Johny Hendricks and Robbie Lawler are fighting for the vacant title in March makes him smile even wider.

“It excites me to find out that Johny Hendricks is fighting Robbie Lawler for the title, which means both of them are going to fight, though I do think that at some point Hendricks will try to take Lawler down because Robbie’s got power and Hendricks has a wrestling advantage over him,” he said. “But I am excited and looking forward to 2014. Either one of these gentlemen who will be the champion, I’m going to work my way up and it’s going to be an interesting fight.”

Bahadurzada was scheduled to face Lawler in July before an injury opened up the slot for Bobby Voelker, and yes, he does say “that could have been me fighting for the title if I had beaten Robbie,” but the what if game won’t get him anywhere. All he can control is what happens Saturday night against Howard, and he was more than excited when learning who he would be facing in his Las Vegas debut.

“Have you ever been to a big party and felt that excitement when you went out with your friends on Saturday night?” he asks. “You knew something exciting was going to happen, right? That’s the feeling I had. But in the back of my head, I know that he will not stand with me as soon as he takes my power, and I’m ready for that too. Everybody wants to stand until they get hit and then they fall back on automatic pilot. And no way in hell is the automatic pilot going to tell him to stand with this guy. He’ll tell him to survive or do whatever it takes to win. But I’m ready for that. I’m ready for anything in this fight.”

Yet what Siyar “The Great” is not ready for is an early ending. Instead, he’s looking for two bonuses.

“I don’t want to finish him immediately,” he said. “I want to put on a show, first of all. It’s the UFC’s New Year’s event, I want to put on a show and I’m going for two bonuses if possible – Fight of the Night and Knockout of the Night. That would be the best case scenario for me, but if he walks into a punch, I can’t promise not knocking him out in the first round or first minute. But my game plan for this fight is to put on a great show and try to get two bonuses.”

Bold words, but Bahadurzada is more than willing to back them up.

“I am by far the most powerful striker in the welterweight division, and you can confirm this by asking anybody at the Blackzilians camp, and any UFC fighters who have seen my power and trained with me. But it doesn’t mean anything because I have not proved it yet on the big stage in the UFC. So I have to prove it in the UFC.”