Like many parents, the father of Ultimate Fighter 25 competitor Mehdi Baghdad wasn’t too thrilled with his son’s decision to chase a career in prizefighting.

“My dad never believed in MMA,” Baghdad said. “He said, ‘Come on, get a job and do something.’ And I said, ‘No, I believe in this.’ And I wanted to show him that I could make it.”

Years later, he has. No, the 32-year-old from La Seyne-sur-Mer, France hasn’t gone as far as he wants to in mixed martial arts, but he’s made it to the big show once and now he’s gunning for a second time that he expects will lead him to a world championship. 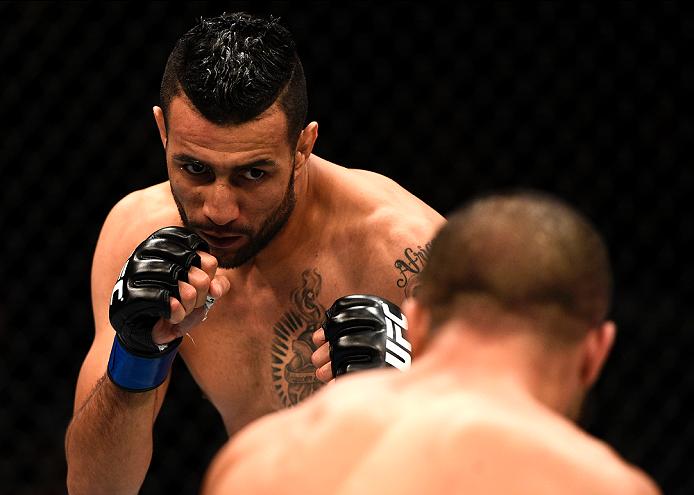 “I think I’m going to be UFC champion,” he said. “When I was fighting at 155, I would tell you that I wanted to be in the top 10 of the UFC and be a name, but I never thought about being a champion. Now, my weight is good, I have 14 years experience, I fought around the world, and now I know I’m going to be a UFC champion.”

That realization that the fighting life was better suited for him as a welterweight and not a lightweight came to him only after several years of sweating down to 155 pounds, smaller than what he fought at as a kickboxer.

It didn’t affect Baghdad too much on the regional MMA scene, as he compiled an impressive record fighting around the globe and then earned a spot on season 22 of TUF. After going 1-1 on the show, he transitioned to the UFC and got a wakeup call in the form of back-to-back losses to Chris Wade and John Makdessi.

“So I was a really good fighter at 155, but when I came into the UFC, I was fighting the best fighters in the world, and I found out that I needed to lift weights and do some conditioning, and I never did that because Muay Thai fighters don’t lift weights,” he said. “And when I started to lift weights, I gained weight. And I was starting to get tired. When I was watching Makdessi fighting in the UFC, I said, ‘This guy’s easy, I’ll kill him easy.’ And when I fought him, it was a tough fight.”

There is more action to come on #TUFRedemption! Tune in Wednesday on @FS1pic.twitter.com/My1jdjcOps
— UFC (@ufc) May 1, 2017

That tough fight ended up in a split decision many believed Baghdad should have won, but he didn’t, and he later received his release from the promotion. But when contacted about returning to the Ultimate Fighter house, this was his chance to test out a new weight class and make another run.

“When they called me, I said, ‘Of course, this is my redemption,’” he said. “I was thinking about the last season I did and I broke my hand, and that wasn’t who I am. So I need to show who I really am.”

In more ways than one. Unlike most of his peers, Baghdad didn’t just leave his home and family for six weeks to travel to Las Vegas for the show. He left his country seven years ago to live in Los Angeles and chase a dream.

“It’s really, really hard to leave your family and friends,” he said. “Now I lost all my friends. They say, ‘Oh, they’re your friends, when you come back, you see them.’ But when I come back to see my friends, they have other friends and it’s not the same. So I lost all my friends. I lost my dad six years ago when I was in America. I left everything for MMA. So that’s why MMA and the UFC is the number one thing in my life. I left everything on the side just for the UFC, so it’s really, really hard. Everyone in the house talks about their kids and home; I left my country and it’s far away.”

But he has no regrets. In fact, he knows his father would be proud of him if he was around to see how far his son has come.

“I know he would be really happy with where I am and I want to show him more,” Baghdad said. “I think I’ve only shown ten percent of who I am, so right now I’m more hungry to show more.”