"I am in the UFC for one reason only, that’s to come back to my home in Russia in the nearest future wearing a champion’s belt." - Ali Bagautinov 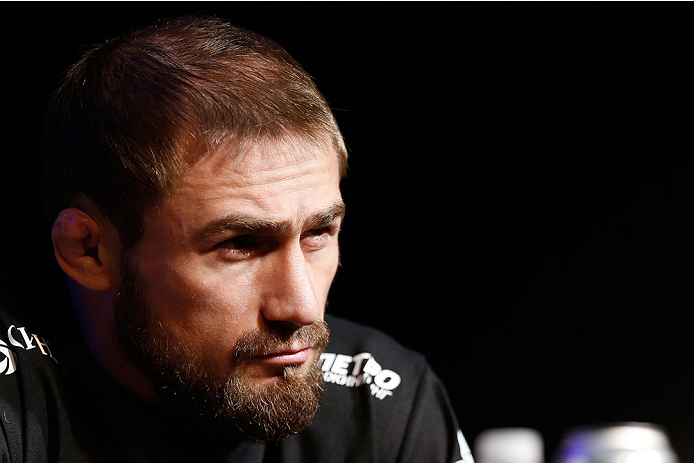 Change is a large part of the growth process.

When a situation begins to expand and take shape toward what it will someday become, the elements that were already part of the structure begin to shift and adapt. That said, this phase is also where change is most readily available, and a newly introduced addition can serve to make a tremendous impact on the environment it now calls home.

At the current time, Ali Bagautinov has the potential to make a resounding mark on several fronts, as he’s shaking up the landscape around him.

With the flyweight division still in its relative infancy, title contenders are made in a much quicker fashion than what occurs in the other weight classes under the UFC banner. A fighter can put together a handful of victories and find a championship opportunity for his next step, where those in other divisions would have several more steps to travel on their respective journeys toward title shots.

This situation is only intensified by the dominance of champion Demetrious Johnson, who is the only man to ever hold the 125-pound title in the UFC. “Mighty Mouse” has dominated every challenger who has opposed his throne and has installed a figurative revolving door to the upper-tier of the flyweight division.  With the divisional hierarchy in mind, all the key elements are in place for Bagautinov to make a run at the title.

The 28-year-old has already built some buzz where a potential shot at gold is concerned, by winning both of his showings inside the Octagon and running his current winning streak to 11 consecutive victories.

“The fact is that victories don’t come easy in the UFC, and I am not just talking about the time spent in the Octagon,” Bagautinov said. “It’s the preparation process, It’s those days, minutes and seconds before the fight, and it is also a great pressure to not let my team, country and family down.

“It’s been dream like,” he added in regard to fighting on the sport’s biggest stage. “I have always been a fan of the UFC organization, so being a part of it is a great thrill. The transition has been very exciting, but I came in ready. I was born ready.”

And while Bagautinov is currently making his impact felt on the 125-pound collective, it is not the only element of change he’s a part of. With the UFC’s continued push for global expansion in full swing, there has been a noticeable resurgence in Russian MMA, with fighters from the Dagestan region leading the charge.

Of this group of surging prospects and established contenders, Bagautinov is certainly a member. He and several of his peers, Khabib Nurmagomedov, Rustam Khabilov and Gasan Umalatov, have quickly become major players in their respective divisions in the UFC.

With every member of the group on the verge of breaking through into official title contention, 2014 could very well the most successful year Russian MMA has had on the sport’s biggest stage.

“Fighting has always been in our culture, especially in the region from where I am from,” Bagautinov said. “Myself, Rustam Khabilov, Khabib Nurmagomedov and Gasan Umalatov - my Fight Nights Team partners are all ethnically from Dagestan, a place where you wrestle from your first year of school. MMA generally is becoming a widely popular sport in Russia, which is why we are getting more and more fighters signed to the UFC, but historically speaking we always produced great MMA fighters like Fedor Emelianenko and Oleg Taktarov.”

Before the Russian powerhouse can start marking off the biggest goals of his career, there are still several major hurdles he must overcome to get there. The most immediate of these challenges will come this Saturday night against John Lineker at UFC 169. The two flyweights will do battle on the pay-per-view portion of the card, and Bagautinov believes it will be one fight fans will not want to miss.

“Stylistically I think it’s a great matchup, and if I wasn’t the one taking part, I would sure like to watch it on TV,” Bagautinov said. “He is a ferocious fighter with great boxing technique. I think as an all-rounder I am better, but you can never underestimate your opponents in the UFC, as they are the best in the world in their respective weight class.

“My guess is that the ground game will be John’s main strategy for this matchup, but then again I am sure that his predictions are the same. It might well be, but you can not underestimate my wrestling abilities. I have no problem with finishing him off on the ground. Let’s wait and see.”

While Bagautinov is already positioned on the title radar at 125 pounds, a victory over Lineker - his third consecutive - would make his case for a title shot hard to dispute. It is his ultimate goal to become the first Russian-born fighter to get his hands on UFC gold and the lure of such an honor provides the highest level of motivation.

“I can’t wait for this to happen,” Bagautinov said. “I am in the UFC for one reason only, that’s to come back to my home in Russia in the nearest future wearing a champion’s belt. It’s up to (UFC President) Dana (White) to decide when I am ready, but if he is reading this one, I am ready.”