“Tito is still a tough, tough fight. People are expecting me to go out there and just walk through him, when they don’t know that he’s only lost to top five type guys...I’m looking at him like this guy is gonna come out here and try to take me out.” - Ryan Bader 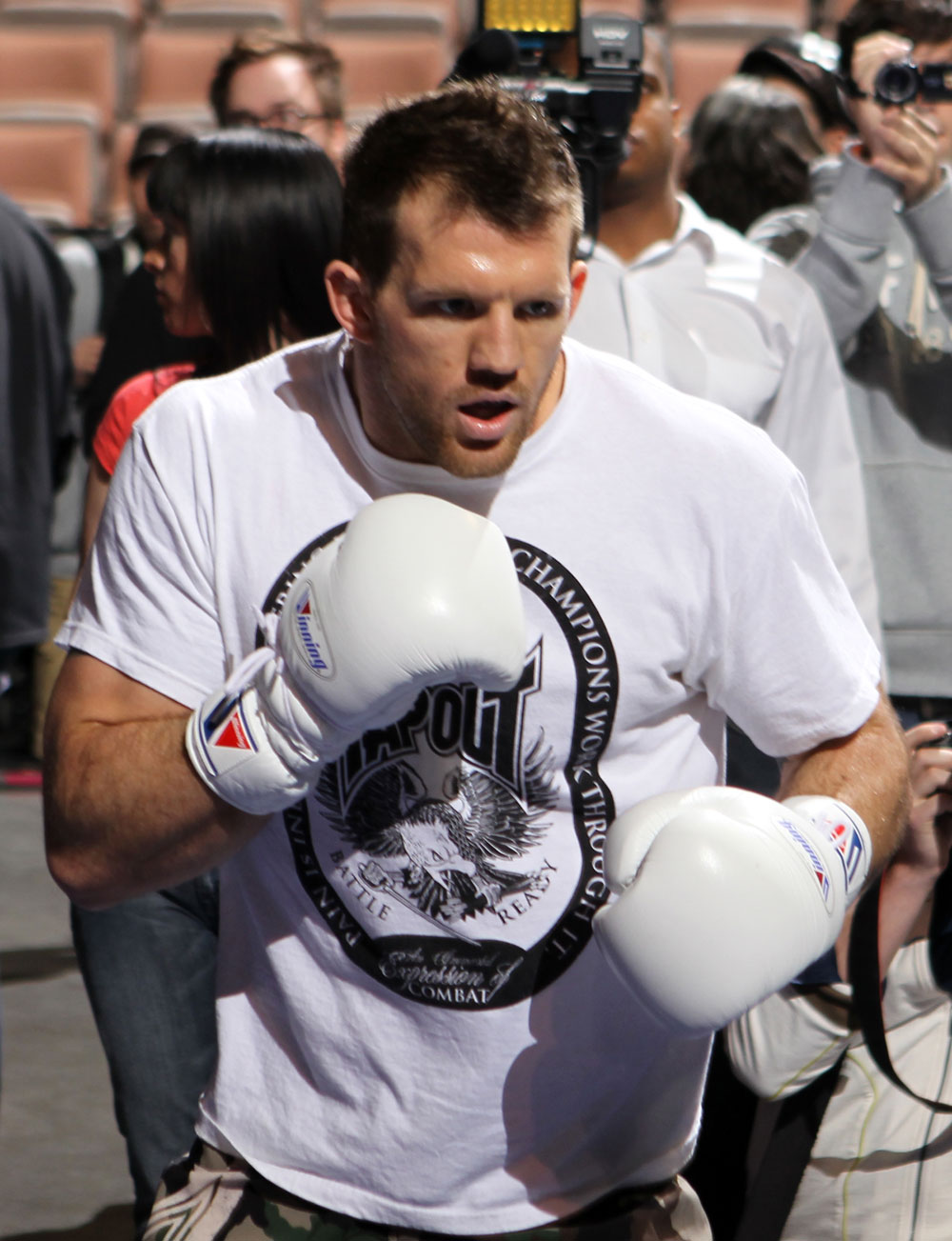 All it took was one answer to see where Ryan Bader’s head was at after the first loss of his pro MMA career against Jon Jones in February. The question was a simple one; ask him when he started to get itchy to get back into the Octagon and put the defeat behind him.

“A week,” he responded, and he meant it. If UFC matchmaker Joe Silva called the former Arizona State University wrestling standout if he was available for any of the organization’s March shows, he was ready to go.

That’s a true competitor, and while his years of wrestling taught him that when you’re in there against the best night in and night out a loss is inevitable, it doesn’t make dealing with one any easier.

“It bothered me for a good week and I couldn’t stop thinking about it, mainly because I felt like I didn’t show up and fight,” said Bader of his second round submission loss to the man who now owns the light heavyweight title. “But that’s in the past. It was a bad night, I felt like I didn’t show up, and that happens in your career. I’ve had enough competition in my life to know that sometimes it’s a combination of that guy’s great, and sometimes you don’t show up either. So I put that in the past a long time ago and I reversed it and used it as fuel for the fire to get back in training, learn, and keep doing what I’ve been doing as far as my mentality to put the work in and get the results.”

Does it help at all that Jones went on to beat “Shogun” Rua for the title six weeks later?

With that first loss done and out of the way, it was time for Bader to get back to the gym and start looking forward again. Despite winning The Ultimate Fighter season eight title and roaring out to four more UFC wins, including victories over Keith Jardine and Antonio Rogerio Nogueira, Bader wanted a big fight but probably expected one that wasn’t as high profile. He got the big fight, third on the UFC 132 bill this Saturday night in Las Vegas against former light heavyweight champion Tito Ortiz. For “Darth” Bader, you can’t get much bigger than that.

“I’m a fighter and I’m also an MMA fan,” said the 28-year old. “I grew up watching Tito Ortiz, Chuck Liddell, Randy Couture and all those guys, and I’m taking this fight very seriously. A win over Tito is great for my career and getting back on the winning track. But it’s also a personal thing for me as far as fighting somebody like that. Being a fan of the sport and being in the same Octagon as a guy like Tito, who paved the way and has been a champion, and to have that name under my belt, it’s an honor. I’m looking forward to it. He’s coming off a few losses, but by no means am I underestimating him at all.”

And that’s the catch. Ortiz still has the name and the reputation, but in recent years, he hasn’t been the unstoppable “Huntington Beach Bad Boy” that he was in his prime. Bader remembers the Ortiz who, in many ways, paved the road for today’s fighters.

“He was a brash guy, in your face, and at that time, he was doing it perfectly because he was backing it up, smashing people and defending his belt,” said Bader. “He had the personality and the charisma, and he was the whole package when he was out there winning when he was the champion. But for me, I’m not fighting Tito Ortiz or his past opponents or anything like that; it’s just another opponent standing on the other side of the Octagon. Later on, I can look back and see Tito Ortiz’ name in my win column, but now it’s just another guy, another opponent.”

That mentality comes from his years on the mat, where you could very often be wrestling someone who had a huge name on the national scene or who you had looked up to as one of the best in the sport. Needless to say, as a two-time All-American and a three-time Pac-10 champion, Bader found the formula to reduce opponents to just that – opponents. No names, no faces, no reputations. In MMA, he did the same thing with Jardine and Nogueira, both of whom dwarfed him in experience. Now he has to do it against Ortiz.

“You can’t put people on a pedestal and say ‘Oh man, I’m fighting Tito Ortiz or Chuck Liddell,’” he said. “You just have to break it down to another opponent, another man. You have to get your training in, train hard and at the end of the day you’re just gonna fight another opponent in the Octagon. You can’t look at their names and you can’t look at who they beat or what accolades they have. Then you lose sight of what got you there.”

What got Bader to this point is a dominant wrestling game enhanced with fight-ending power in his fists, and he’s worked that game to perfection in all but one pro fight. Ortiz never had the one-punch power that Bader has, but when it comes to ground and pound, the 36-year old is a master. And Bader has done his homework on his foe, well aware that 0-4-1 record since his last win against Ken Shamrock in 2006 is deceptive. So for all the comments being made that the Arizonan is going to walk over the aging former champ, Bader is not taking him lightly.

“Tito is still a tough, tough fight,” he said. “People are expecting me to go out there and just walk through him, when they don’t know that he’s only lost to top five type guys. I’m not looking at his last four losses. I’m looking at him like this guy is gonna come out here and try to take me out, and I’m gonna do the same against him.”

Just another fight. That’s the way Ryan Bader is approaching it, and when the bell rings, it will be. But before and after, what may be odd for him is that despite being one of the game’s good guys, he could get booed for fighting a fighter who has become a sentimental favorite in recent weeks. But if Bader is the one forced to be the victor in Tito Ortiz’ last stand, so be it. It’s just business.

“Love him or hate him, he has done a lot for the sport and the fans know that too,” said Bader. “So at the end of the night, if it is his last night in the Octagon fighting for the UFC, I could definitely play that role (as the bad guy). But it doesn’t matter to me. I’ve got a job to do, and my job is to go out there to win. It’s about me going out there and looking my best. I want to get better every time I go out there, and I’m also coming off a loss. I want to erase that loss from everybody’s mind and look a ton better.”