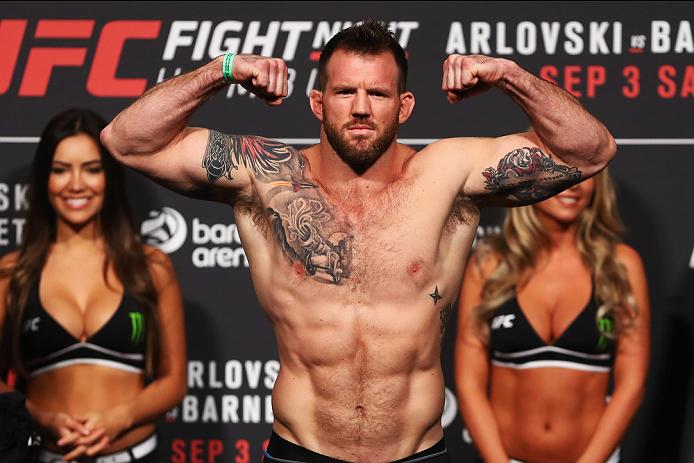 The second half of the UFC doubleheader on Saturday features a huge card in Sao Paolo, Brazil capped off with a light heavyweight showdown between Ryan Bader and Rogerio Nogueira.

Nogueira will be looking for a measure of revenge as he battles Bader for the second time after first facing off in 2010. On that night, Bader outwrestled Nogueira for 15 minutes en route to a unanimous decision victory.

Now the Brazilian wants to earn back a victory over Bader while competing in front of his home country fans.

Also on the card, top bantamweight prospect Thomas Almeida is back in action while looking to bounce back from a disappointing outing in his last fight with Cody Garbrandt. He takes on undefeated Albert Morales, who looks to make a huge impact in his second fight for the promotion against the ultra dangerous Almeida.

In today's fantasy preview, we're going to examine some of these key fights happening in Brazil to find out who has the edge in some of the close matchups as well as any potential upsets brewing at UFC Fight Night: Bader vs. Nogueira.

It's been six years since Bader and Nogueira first met, so obviously it's tough to judge whether or not that matchup will be any sort of indication about how this fight will play out. What we know for sure is that Bader has gotten much better since 2010, adding plenty of new layers to his overall mixed martial arts game.

At his core, Bader is still a phenomenal wrestler with some of the best takedowns in the sport. He's routinely outwrestled other fighters with similar backgrounds and Nogueira definitely doesn't have the kind of takedown defense that will likely deter Bader from putting this fight on the mat if that's what he wants. Still, Bader has also vastly improved his striking from the last meeting while adding a lot of weapons to his arsenal, including crisper, more technical boxing. He's even managed to add some explosive moves, like the one he used in his last fight to knock out Ilir Latifi.
RELATED: Free Fight - Bader vs Nogueira 1 | Nogueira vs Ortiz

As for Nogueira, he's still largely the same fighter he was in 2010, but that's not necessarily a bad thing. Nogueira has always been an incredibly tough and durable fighter with some of the best boxing the light heavyweight division has ever seen. Nogueira also gained a lot of confidence with his last win over Pat Cummins, and fighting in front of his home crowd will certainly be a boost on Saturday night.

On paper, Bader certainly has an easier path to victory if he chooses to put Nogueira on the ground and keep him there for 25 minutes. It probably wouldn’t bring the crowd to its feet in Brazil, but the result would still put another win on his resume. Bader also has knockout power in his fists and more speed than Nogueira. Of course, the Brazilian is a veteran with better technical boxing than his opponent, so Bader has to be careful not to make any dumb mistakes that would leave him open for the counter.

It's just hard to imagine Bader losing after already beating Nogueira in 2010 while still largely a novice in the sport and considering that now he's a much more experienced and dynamic fighter than he was in those days.

Prediction: Ryan Bader by TKO, Round 3

The oddsmakers have made Claudia Gadelha one of the heaviest favorites on the upcoming care in Brazil, but don’t underestimate Cortney Casey’s ability to turn this into a serious dogfight.

Casey has proven through her first four fights in the UFC that she's as tough as nails and quite the finisher. After 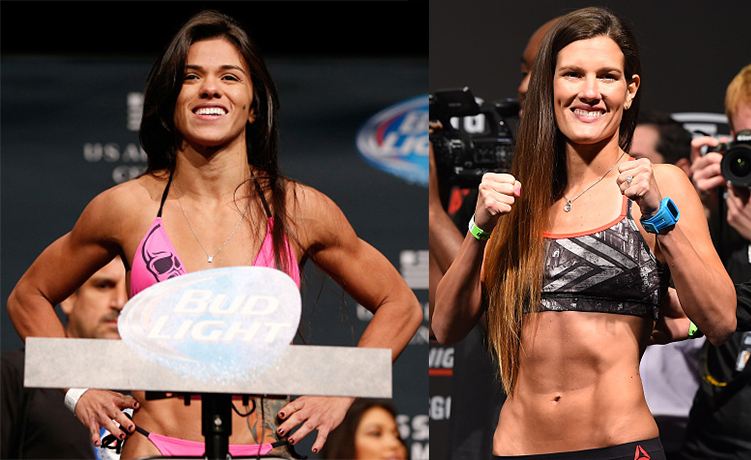 dropping two bouts in a row to begin her UFC career, Casey has bounced back with a TKO finish over Cristina Stanciu as well as a submission over highly touted strawweight Randa Markos in her last fight. Casey only seems to be getting better with each fight in the UFC, and that could bode well for her as she prepares to meet arguably the second best fighter in her division behind champion Joanna Jedrzejczyk.

Gadelha is fresh off a five round battle with the champ back in July, and while the result didn't go her way, there's no doubt the Brazilian knows she was within inches of bringing that belt back home with her. Now Gadelha will look to restart her win streak by beating Casey on Saturday night. Gadelha's biggest advantage in this fight will come from her wrestling and groundwork, where she's virtually unmatched in this division. Gadelha averages over four takedowns per fight with over 50 percent accuracy, both of which are very high compared to the majority of the UFC roster.

Gadelha definitely remains the pick in this fight just based on her experience and the tremendous groundwork that could stifle and eventually frustrate Casey into making a mistake. Gadelha could also win on the feet, but that's a much more dangerous prospect against a high volume striker like Casey. Look for Gadelha to engage on the feet early and then swoop for the takedown, where she will look to stay in control for all three rounds.

A very intriguing middleweight bout unfolds on Saturday night as veteran fighter Thales Leites takes on Krzysztof Jotko in Brazil. Leites will look to pick up his second straight win after submitting Chris Camozzi back in August, while Jotko has quietly put together four straight victories while cracking the top 15 at 185 pounds.

Jotko most recently dispatched Tamdan McCrory with a devastating first round knockout, but the Polish-born middleweight is more than capable of grinding out a decision to get a win as well. Jotko uses a good mix of striking and wrestling to keep his opponents guessing, although against a world-class grappler like Leites, it's hard to imagine he'll be looking to take this one to the ground.

The submission skills possessed by Leites could allow him to control where this fight takes place, as Jotko will probably avoid throwing too many kicks out of fear that he might end up planted on his back with an elite grappler on top of him. Couple that with Leites’ ever improving striking game and it's hard to gamble against the Brazilian getting a win in his home country and stopping Jotko's recent streak at the same time.

Coming off two impressive wins, Cezar Ferreira will look to make it three in a row as he faces Swedish powerhouse Jack "The Joker" Hermansson this weekend. This fight truly is the definition of "striker versus grappler," as Ferreira will undoubtedly look to take this one to the mat while Hermansson wants to keep it standing.

Ferreira has shown incredible takedown skills since joining the UFC, with over 68 percent accuracy when looking to put his opponents on the ground. That will be a huge weapon against Hermansson, who is a knockout artist that loves to work from the clinch. If Hermansson gets locked in the clinch with Ferreira in this bout, he might find himself planted on the mat, looking for air.

That being said, Hermansson is a serious power striker with dynamite in both hands and dynamic takedown defense. Hermansson only needs to stave off a couple of those attempts from Ferreira to hopefully figure out his timing and then start teeing off with punches. Ferreira has struggled defensively on the feet before, and if he does that Saturday night, Hermansson may leave Brazil with a knockout and a bonus at the end of the night.

Prediction: Jack Hermansson by TKO, Round 2

These are the fights that appear to be a little more one-sided, but remember that this is MMA where anything can and usually does happen.

Second-time UFC fighter Albert Morales might be a solid prospect one day, but he's stepping into the lion's den against Thomas Almeida. Morales fought to a majority draw in his UFC debut, but he's taking a big step up in competition this weekend.

Morales is undefeated with a mix of knockouts and submissions on his record, but it's a whole different world facing someone like Almeida, who is coming off a loss in his last fight with something to prove on Saturday night. Almeida is an explosive stand up fighter with some of the nastiest strikes in the bantamweight division. Almeida is also extremely active - landing over six and a half significant strikes per minute with nearly 50 percent accuracy.

That kind of striking onslaught doesn’t bode well for Morales, who could undoubtedly deal with jitters while facing a legitimate top 10 opponent, not to mention fighting Almeida on home soil in Brazil. Look for Almeida to come out and try to overwhelm Morales as soon as this bout begins and, considering his long list of finishes, it would be hard to see Morales making it all three rounds, much less making it out of the first.

Prediction: Thomas Almeida by KO, Round 1

It's been almost a year since Johnny Eduardo last stepped foot in the Octagon, but with the memories of a disappointing fight against Aljamain Sterling still bouncing around his head, there's no doubt he will be looking to make a statement against Manny Gamburyan. At his best, Eduardo is a nasty striker with huge knockout power in his hands who will enjoy a four-inch reach advantage over Gamburyan.

Gamburyan is a veteran, so he's never going to just fade away without putting up a fight, but he needs to get this fight into the clinch or to the ground if he has hopes of winning. Gamburyan is no slouch on the feet, but he's going to be giving up a lot of height and reach against an experienced striker like Eduardo. If Gamburyan can put Eduardo down early, that's going to be a huge confidence boost to him.

Otherwise, expect Eduardo to set the pace with long, straight punches, and if he's able to shrug off a few takedown attempts from Gamburyan, he could put together the right combination to get a finish. If Eduardo doesn’t put Gamburyan away, he'll look to slice and dice the former Ultimate Fighter finalist for three straight rounds until he earns a victory.

Prediction: Johnny Eduardo by TKO, Round 2 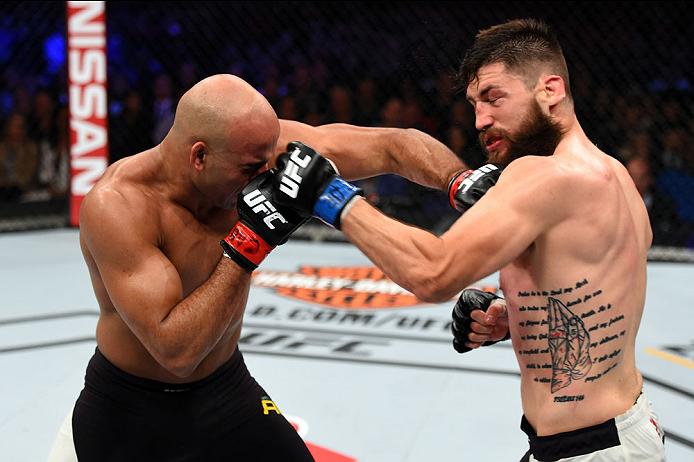 A pair of Ultimate Fighter winners meet in this matchup between Warlley Alves and Kamaru Usman. Usman has been undefeated since joining the UFC roster, with each win looking better than the last. Usman is a powerfully strong wrestler who averages over seven takedowns per fight. Usman also doesn't miss very often when looking to outwrestle his opponents, with over 56 percent accuracy in his takedown attempts.

Still, Alves has shown great takedown defense - blocking over 83 percent of the attempts against him - and he returns fire with some of the deadliest strikes at 170 pounds. Alves hits like a truck and he's a force of nature in the early going, where he's earned four first round finishes in his career. Alves clearly has the better striking, but the key for him is avoiding the ground game with Usman.

Usman could easily put this fight on the ground and then proceed to grind Alves into the mat for 15 minutes. That being said, Alves is a better striker with a very underrated submission arsenal. He may end up beating Usman on the feet, which then forces the Floridian to go for a takedown. From there, Alves has one of the best guillotine chokes in the world and that’s the hold that often gives wrestlers the biggest fits.

Prediction: Warlley Alves by submission, Round 2.