Bader finds peace as he piles on wins 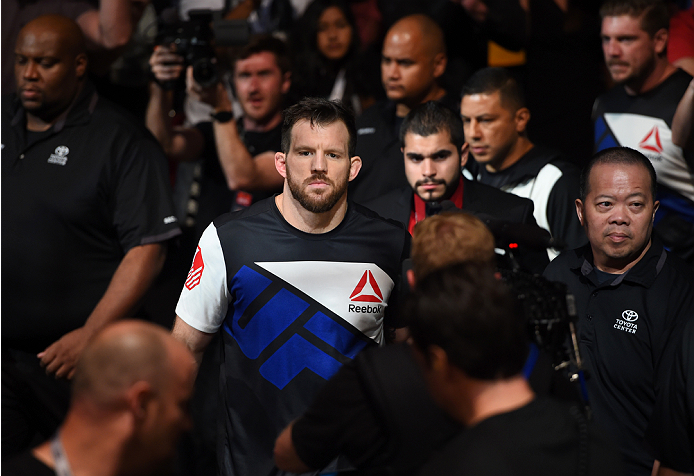 This has got to be it for Ryan Bader. He’s won five fights in a row, is coming off a win over former world champion Rashad Evans, and on January 30 in Newark, New Jersey, he faces off with the No. 2 ranked light heavyweight in the world, Anthony “Rumble” Johnson.

With a win, a title shot has to be his, right?

“Who knows?” Bader laughs. “Every fight feels like that. Every fight is a big fight, and you move on to the next one. But for me, this is one of the ones where I’m fighting a top two guy who’s respected. They put him in to fight DC (Daniel Cormier) for the vacant title, so I think it is, but it doesn’t really matter to me anymore. I’m done thinking about getting a title shot and this and that. I’ll control what I can control and there are too many variables out there. The champ could get hurt, I would have to wait a year and a half, and you’re still not guaranteed anything at all. So I’m keeping my head down and continuing to do what I’ve been doing these last five fights.”

And that’s win. Sounds like a simple enough equation, but at this level of the sport, every fight has the potential to send a fighter tumbling down the ladder with one swing of the fist. Bader’s been on the short end of those fights before, but since his December 2013 win over Anthony Perosh, he’s been the hammer and not the nail.

"I know my abilities and I know I can beat anybody.” -- Ryan Bader

“I would say 90 percent of it is just believing in myself and knowing that I can go out there and beat anybody in the world on any given night,” the former Ultimate Fighter winner said. “My coaches are always trying to get me to instill that in my mentality, and it was there, but there were still doubts. I was younger, but at this point in my career, I’ve fought the who’s who of MMA, stood across from champions, beaten champions and I fought everybody. So that doesn’t rattle me anymore. I know my abilities and I know I can beat anybody.”

After defeating Perosh, Bader issued defeats to Rafael Cavalcante, Ovince Saint Preux, Phil Davis and Evans, leaving little doubt that he belonged on the short list for a world title shot. But getting that shot has been elusive, and while that reality once frustrated him, it doesn’t anymore.

“I got jaded and it kind of drove me crazy a bit,” he said. “All these guys had fights, and I didn’t. I was hoping I would get the AJ (Johnson) fight, and I was supposed to fight DC in June. That fell through and he got the AJ fight. Then DC won and I figured I would fight him but they threw (Alexander) Gustafsson in for a title shot, and I was left without an opponent. That time right there was pretty tough for me, but when I got Rashad, it was a lot better because I had something to look forward to.”

The clear-cut decision victory over Evans has seemingly left only one obstacle between the Arizonan and the winner of 2016’s Cormier vs. Jon Jones rematch, and that’s “Rumble.” And while Bader admits to not playing the “what if” game, he is honest when asked who he might like to face should he emerge victorious in the Garden State next month.

“There’s an upside to both fights,” Bader said. “With Jones, you’re fighting one of the greatest fighters of all-time and I have a loss to him already, so I want to go out there and prove that I’m a better fighter than I was back then. With DC, we have history and we’ve had words, so it would probably be DC if I had to fight for the title, but regardless, it’s not who, it’s what. If the title’s on the line, I don’t care who it is.”