Baddest on the planet? Cormier searching for GOAT status 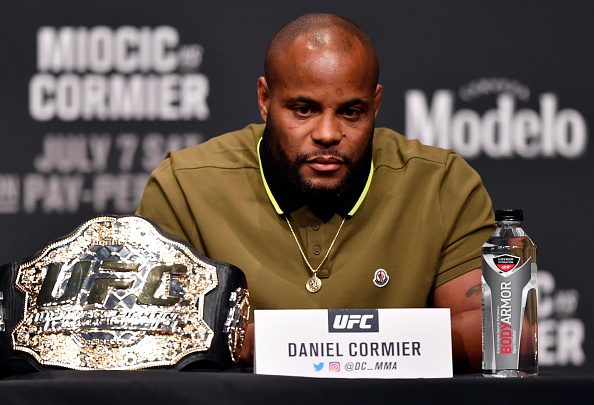 Cain Velasquez was already soaring up the heavyweight ladder when two-time Olympic wrestler Daniel Cormier was getting his feet wet in the American Kickboxing Academy, attempting to get his own MMA career off the ground.

So head coach Javier Mendez kept a close eye on the two when they were in the ring together.

“Just take Cain down,” Mendez would tell Cormier, who recalled later that such a task, “Wasn’t easy.”

Eventually, they graduated to sparring, with Mendez telling the future UFC champion to “Go easy.”

Cormier, a competitor from birth, wouldn’t have it.

“Let the dude fight me.”

“Not even three minutes later, I had a broken nose,” laughs Cormier. “I turned away, got on the first flight back to Oklahoma and saw my doctor.”

Nearly a decade later, Cormier and Velasquez are still friends, still training partners and still at different points in their careers. Velasquez, a two-time ruler of the heavyweight division, is plotting his comeback from injury at the age of 35. Cormier, 39, is the UFC’s champion at 205 pounds and closing in on a retirement that he expects to come next year. And in keeping with the theme that some things never change, as “DC” prepares for Saturday’s showdown with current heavyweight king Stipe Miocic, he’s still looking for those young kids to make him dig deep in the training room. This time around, it’s a familiar face in Duke All-American wresler Jacob Kasper.

“He’s a young hungry kid that just wants to work hard and train,” said Cormier. “And when you’re around somebody like that, that has that type of personality, it’s infectious. I can’t help but try and keep up with Jake. It’s not easy, but I give it my best shot, He’s a grinder and he wants to work and I try to keep up and he does tune me up as far as my wrestling. I feel as good as I have in years when I do my preparation with him.”

That type of training camp torture is par for the course with Cormier, one of the hardest workers in the sport. That willingness to go where few want to led him to the top of the wrestling world, and he’s repeated that feat in MMA. Yet even though his name is already etched in the history books, he still wants to add another chapter to his story before he hangs up the gloves, and to do that, it means taking care of what he considers to be unfinished business.

“My heavyweight journey was never completed because I would not have fought Cain,” said Cormier. “So it’s kind of come full circle in the sense that now I get to see. I was on the verge of a heavyweight title shot in the UFC. Cain was the champ so it wouldn’t have happened. Now, five years later, I get my chance to fulfill that part of my career that I didn’t get to finish.”

That part saw him begin his career with a 13-0 slate compiled solely at heavyweight. And it wasn’t a stretch filled with cupcakes as he built his record.

His friendship with Velasquez prompted him to drop to 205 pounds, and in his fourth bout in the division, he beat Anthony Johnson for the vacant light heavyweight crown. To this point, the only blemishes on his record are a loss and no contest with Jon Jones, and while the Louisiana native would love to close his career with another shot at redemption against Jones, for now, it’s all about Miocic, and if Cormier joins Conor McGregor by becoming only the second fighter in UFC history to hold two divisional titles simultaneously, it will go a long way in pushing those Jones bout into his rearview mirror.
MORE FROM UFC 226: How Do You Want to Be Remembered? | Highlights from Thursday's Press Conference

“It means legacy,” Cormier said. “It means that I’ve done what I’ve always intended to do. I always said when I started doing this that I wanted to be remembered. I need to challenge myself. I need to go out and try to make a statement. I’ve always said legacy matters. And there’s no better way to ensure that I’m always remembered. When my time’s over, I want people to talk about Daniel Cormier.”

Win or lose, they already will. But if he beats Miocic, you might just want to start calling Cormier the baddest man on the planet. That’s cool with him, but he wants to go a step further should he leave T-Mobile Arena with two championship belts.

“I’m not only the baddest man on the planet, I may be the greatest fighter of all-time.”