From the Author: 'The Pact's' Dagostino talks Garbrandt book

When "The Pact" coauthor Mark Dagostino first came upon the story of Cody Garbrandt and Maddux Maple, it was unlike any story he had heard before.

He decided right then that he wanted to help tell the story to the masses and he did so with “The Pact,” which is available to buy now. The book details Garbrandt’s incredible bond with Maple and their journey through Maddux’s battle with cancer and their joint quest for the UFC championship.

Dagostino spoke with UFC.com about the project, his takeaways from working with Garbrandt and why “The Pact” is worth your time.

"The Pact" went on sale today and coauthor @markdag spoke to https://t.co/fdV4RnsUPw about his impressions of @Cody_Nolove and Maddux Maple. pic.twitter.com/5IFti0EOH9
— UFC News (@UFCNews) May 8, 2018

MATT PARRINO: What did you learn about Cody Garbrandt throughout the process of the book?

MARK DAGOSTINO: He’s such a great guy. He really tries hard at everything he does. I don’t think I’ve ever met someone so driven. I’ve interviewed a lot of people and he has this drive about him and this desire to be great. He’s obviously applied that to the top of where he can go in life and in the UFC. And now he’s really applying it to life. He has so much focus on his wife and his son. He wants to be a world championship dad now. He wants to be the father that he never had. To see somebody to be able to elevate their life that way is an awesome story. It’s what I’m all about with the books I do. All I want to tell are inspiring stories.

PARRINO: There’s a great juxtaposition between Cody the fighter and Cody the caring, compassionate mentor and friend. Did that impress you about Garbrandt?

It’s the story of what does it take to get out of a bad situation. Wherever you’re at, whatever your background is like, what does it take to sort of escape that trap of where you are and where people expect you to be? It’s almost like the universe connected (Cody) with Maddux, and connected him with the people that he needed to sort of find a new path in life and get out of that cycle of violence that he was in.

DAGOSTINO: It was totally unique. There was something about Maddux that touched him. He saw something familiar in him, something brotherly in him and he cared about this kid and saw early on how they could inspire each other. It obviously caught so many people’s attention. And when you really dig into it and really dig into Cody’s background the way I was allowed to, you just see this incredible story. And again, it’s the story of what does it take to get out of a bad situation. Wherever you’re at, whatever your background is like, what does it take to sort of escape that trap of where you are and where people expect you to be.

Everybody expected that he would wind up working in the coal mine or wind up in jail like his dad. This was real stuff. These were the expectations on him. Between his mom and her dedication to allowing her boys to wrestle - that takes a lot of dedication – she was driving them all over the place. To his uncle who turned into a great role model and father figure in a lot of ways, and a great coach. And then his own connections in life that he just wanted to be a better person. There’s just something to having that focus and drive. It’s almost like the universe connected him with Maddux, and connected him with the people that he needed to sort of find a new path in life and get out of that cycle of violence that he was in. And then focus it on something positive like UFC. It was an inspiring journey that he was open and willing – for lack of a better word – to show some love for this kid.

To open up his heart to this kid and family, that actually opened him up to a whole other side of life. It set him on a different path than just being the fighter or just being the cocky kid or talented fighter that he is. I was inspired by it and it’s why I signed on for the book. I don’t think you have to be a UFC fan to get this story and to understand it. I think there’s something just awesome here that we can all be inspired by and get pumped up about – to use Cody's language. When you really get into this story and you see how far he was able to go in a short period of time, he’s still a young guy. You see how far he was able to go from really being at a point in life where he could have just wound up selling drugs or going to jail. You see how far he was able to come in a five-year period after meeting Maddux and getting dedicated to the sport. It’s inspiring. You can be in a totally different place in your life five years from now. And what an incredible story that is and how can you not get excited about that? 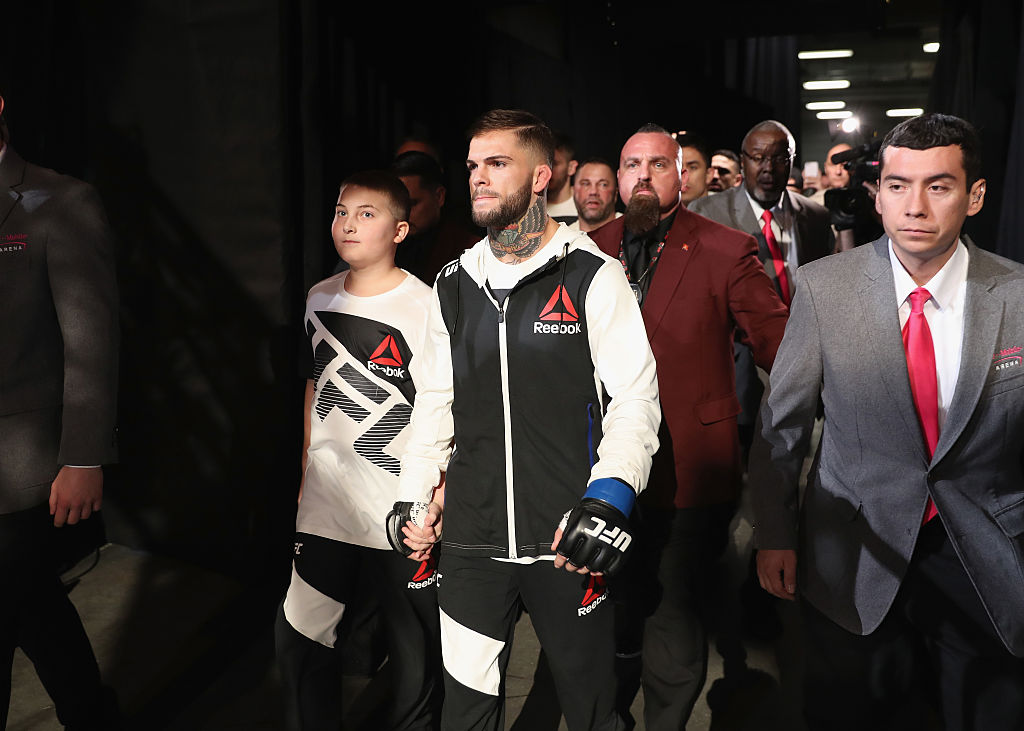 PARRINO: One major theme that emerged from the book to me was how critical every decision we make in life can be. Cody’s decision to reach out to Maddux or keep fighting changed the course of his life. It’s these little decisions in life that can change everything, right?

DAGOSTINO: That’s really true. I’ve done quite a few books now and with people from very different walks of life than Cody. These similar themes pop up in a lot of these books. People who get to the top, people who are very successful have made these little decisions along the way that help guide them along the path. Usually the decisions are something good. They’re thinking above and beyond themselves, they’re helping somebody else, and they’re really listening to the messages that they’re getting, either from a mentor or in this case his brother (Zach Garbrandt), in a huge way. People are listening and paying attention to those moments when they can do something. Cody has the power to help this kid and his family. He didn’t know how he was gonna do it – it could have just been raising money doing a local fight. He didn’t know what it was gonna be, but he decided to do it.

Just making that decision led to this whole inspirational path for both of them. It’s a huge takeaway and it’s something I think about more and more in my life. Where are the little decisions and the little turning points that led me either to the right place, someplace I want to go, or when you go the other way and you ignore those things. They can lead you down the wrong path. Cody was fortunate enough for some reason to really pay attention in these moments. Look where it led him. The fact that he’s a dad now. I was with him the day after they found out they were having a baby – before they told anyone. He was just over the moon. He was just bursting at the seams. He wanted to tell everybody.  He was so proud and so happy and so excited to be thinking about this future and actually being a dad.

He took the negative thing that his dad wasn’t around – his dad was in prison. And when his dad was around he wasn’t a very good guy. And we didn’t even get into some of the harder aspects of that in the book. He took that negativity and flipped it on its head and said, ‘OK. I’m not going to be that.’ He used a negative to drive something positive in his life. That’s such a lesson and such a takeaway for me. I really hope people get it because I actually think about these things now after working on this story. Looking at how drastically he was able to turn his life around – I look at it in my own life. I don’t have anything that drastic of a turnaround but we all have stuff that we’d like to do better and improve in our lives. Like you said, there are so many takeaways from Cody’s story that we can all learn from. That’s an extraordinary thing for somebody so young.

PARRINO: Is there any specific story or moment that you go to first when thinking about this book and project with Cody Garbrandt?

A story about a 20-year-old fighter befriending a 5-year-old kid and how they inspired each other. It’s completely unique.

DAGOSTINO: I think it’s this unusual friendship – this unusual thing where he was able to bond with a kid. He was able to bond with someone younger than him and with a family that was different from his own. I think there is something really incredible there. Oddly enough, I think a lot of us can learn a lot from kids. Kids are tough, they’re smart and pure instinct. Every one of us knows stories where some kid will say something and it seems really profound or really wise.

I think there’s something there and we should pay attention to kids a little more often. It really is his ability to bond with a kid who was five years old when they met. And look where it led them. He’s outside of his comfort zone and way beyond anything someone would expect him to do. Even if he was a professional and at a different point and thinking about giving back. It wasn’t about that; it was before that. It was before he was a big deal and before he was anything. It really made such a difference in this kid's life and that made a difference in Cody’s life.

So to me it’s that bond and unique thing they share that’s unusual. It’s an unusual story. You don’t hear about a guy in his early 20s taking any kind of mentor position with kids. That, to me, just set up a story that’s unlike any other out there. You just don’t hear it. You hear about a great coach taking on a kid or a great coach with a new student going for the championship. These relationships develop between a young fighter and a maybe an old fighter who’s been in the business for 40 years and finally finds life for a new fighter that comes along. You don’t hear this story.