Kevin Holland's First UFC Main Event Is Sure To Be Wild And While Anything Can Happen, Expect Nothing But Authenticity From the "Trailblazer" At UFC Fight Night: Brunson Vs Holland
By Gavin Porter, On Twitter @PorterUFCNews • Mar. 19, 2021

No UFC fighter had more victories in 2020 than middleweight Kevin Holland.

The 28-year-old’s five victories tied Neil Magny (2014) and Roger Huerta (2007) for the most UFC wins in a calendar year. And if it were up to Holland, he would have liked the opportunity to fight more than he was able to.

But when you go 5-0 in a year and you are as entertaining as Holland is, it’s only a matter of time before big fights start happening and it becomes a little more difficult to be as active as he prefers to be.

The truth is that Holland just simply loves fighting. He loves talking smack and he loves to lay “the smack down” on his opponents. It doesn’t matter if it is a “bum” or UFC middleweight champion Israel Adesanya standing across from Holland in the Octagon, “Trailblazer” will bring the same energy.

With big time performances such as a finish of Joaquin Buckley and an all-time crazy knockout win over Jacare Souza, Holland earned his first UFC main event. Holland will face longtime middleweight contender Derek Brunson on March 20 in a bout between two competitors that simply don’t vibe with each other.

“The simple fact that we had words, knocking Brunson out will feel spectacular. It will feel different knocking anyone else out because I don’t really like the guy. It always makes it better when you can beat the crap out of somebody you don’t like,” Holland told UFC.com with a grin. “I make 2021 a better year by just enjoying it the same way I enjoyed 2020, if not enjoying it a little more. Everybody is concerned about the fight world, but I’m just concerned about the world, period. As long as I get to go out of here, knock Brunson out and go shopping without a face mask, that would be dope.”

Holland’s feud with Brunson started with some messages on Twitter and Instagram last year. That led Holland to call Brunson out after his incredible KO of Souza. It also led to a five-round main event showdown with an opportunity for Holland to prove that he’s a true contender.

“[The main event is really cool] but the whole idea of fighting for 25 minutes sucks. Love the poster, hate how long the fight is, I’m going to knock him out before the fight takes that long,” said Holland. “You don’t get paid for OT; you get paid for the fight, so let’s just go out there and get the job done.”

What’s probably most fun about Holland is that his fighting style is just as entertaining as what comes out of his mouth. Here is Holland, about to compete in his first UFC main event against Brunson, but he’s already talking about “smacking” 185-pound champion Israel Adesanya. 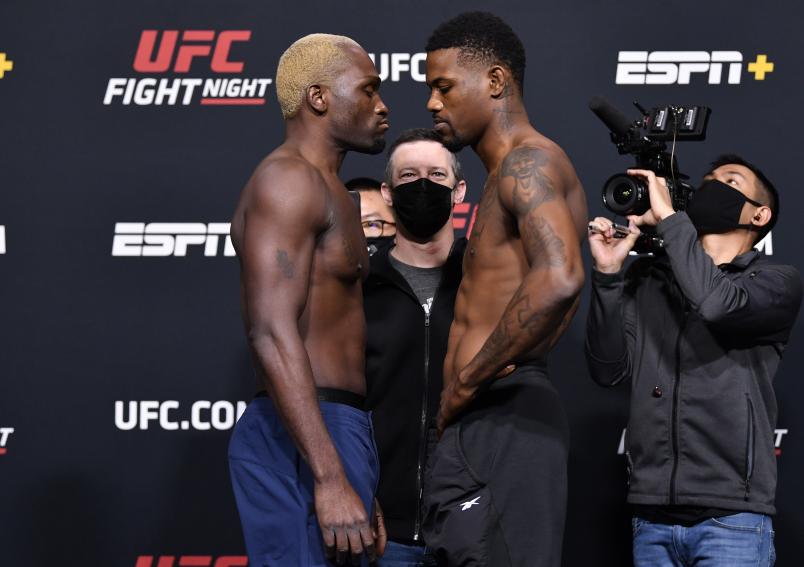 Derek Brunson and Kevin Holland face off during the UFC weigh-in at UFC APEX on March 19, 2021 in Las Vegas, Nevada. (Photo by Chris Unger/Zuffa LLC)

Exactly what you see and hear, is exactly what you get. That authenticity is not only something that Holland is proud of, but it’s what makes him so endearing to fight fans.

“I think people are seeing me bigger than what I am. You are going to find out after I beat Brunson if I’m a contender or not, but they are already screaming for things I haven’t put myself in position to get yet,” said Holland. “But with that being said, with a smack down on Brunson I could be in a better position for them to actually start talking about [fighting with Adesanya]. I see the champ mentioning my name and I still have a couple of fights to go, and I know that, but when I get there, I get there.”

It’s clear to Holland that “a smack down” on Brunson won’t be easy. Even with their verbal jabs and haymakers comes respect, as Holland quickly acknowledges that Brunson is “good at everything” and that he’s been at the top so long because he’s one of the top fighters in the division.

“Overall, when two men say a lot of things you got to go out there and figure it out,” said Holland before adding that he has some surprises in store for the UFC veteran. “They say he’s never been taken down in the Octagon, well s***, I guess I got to take him down. Makes me one of the best wrestlers he’s ever been against if I take him down, right?”

Outwrestling Brunson would be a feather in the cap for Holland, and while that sounds great, his focus remains on “putting my right hand on his face” and leaving the UFC APEX with multiple checks.

That’s Holland’s goal every time. He honestly isn’t worried about the opponent he is facing or about the main event spotlight. That all comes with the journey.

“I will do whatever it takes to continue to fight, whether that’s going up, going down, going sideways, going around, I don’t care. I will continue to fight,” said Holland. “All the people worried about rankings and s*** like that, take the number away from my name and just let me fight bums again. I don’t care, I just want to fight.