JAKE MATTHEWS VS. AKBARH ARREOLA
Melbourne native Jake Matthews returned to the win column in impressive fashion in UFC 193 prelim action at Etihad Stadium Saturday. The 21-year-old lightweight dug deep, surviving a knockdown in the first round and beating Akbarh Arreola due to a cut after the second.

It was an interesting first round, with Matthews in control early on, but with a little over two minutes left, a flush kick to the head dropped the Aussie to the deck and put him in deep trouble as the veteran Arreola pounced and looked for the submission. With seconds left, Matthews was able to shake Arreola off his back and finish off the round with an impressive ground attack.

Matthews started Round 2 with a takedown, and thudding elbows and forearms from the top position followed for the rest of the frame, cutting the Tijuana native badly over the right eye. And while Arreola survived the round, the Octagonside physician had seen enough and recommended that the fight be stopped.
Matthews moves to 10-1; Arreola falls to 23-10-1. 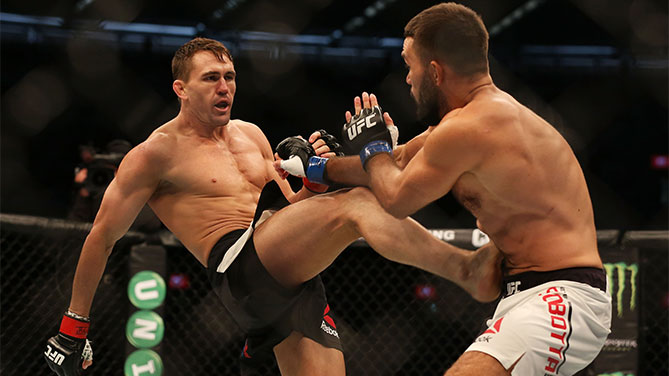 Dubbo’s Kyle Noke delivered one of his best UFC performances to date at the perfect time, thrilling his Aussie fans with a first-round stoppage of Peter Sobotta.

Noke was on the attack as soon as he came out of his corner, fighting with a clear intensity in his home country. Kicks were his weapon of choice and as the bout approached the two-minute mark, he struck with a front kick to the body that dropped Sobotta like he had been shot. Noke went on the attack with ground strikes and Sobotta wasn’t able to recover or respond, forcing referee Steve Perceval to stop the fight at 2:01 of the first round. 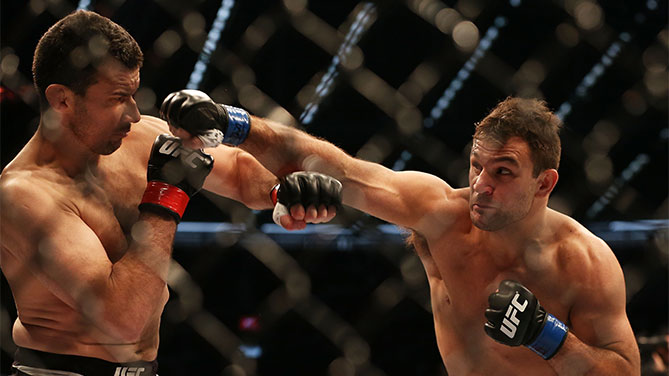 New York light heavyweight Gian Villante was in control from the start against Sydney veteran Anthony Perosh and he didn’t let it last long, finishing “The Hippo” by knockout in the first round.

If there is such a thing as patient aggression, Villante used it perfectly in the fight as he walked Villante down and picked his shots perfectly, rocking Perosh on a couple occasions. Eventually, it was clear that Villante was one shot away from finishing the fight. And with a little over two minutes left, he landed a perfect right hand and Perosh fell hard to the deck, referee Greg Kleynjans immediately stepping in to stop the bout at 2:56. 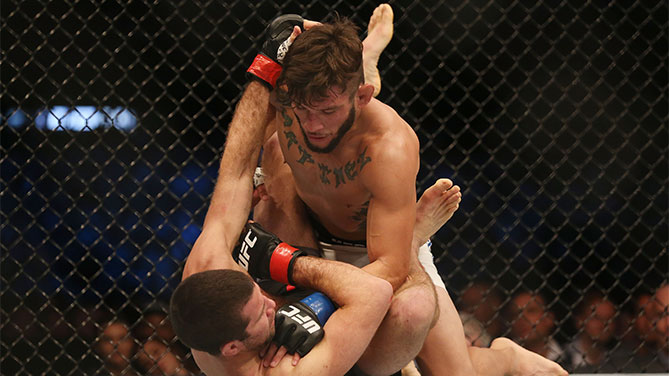 It took four tries but flyweight veteran Danny Martinez finally got in the UFC win column, shutting out Richie Vaculik over three rounds.

The first round was fast-paced and competitive, Vaculik’s disciplined striking serving him well on the feet, but Martinez delivered a pair of takedowns that showed off his wrestling pedigree and evened the score a bit.

Martinez had another good round in the second as he mixed his striking well with his takedowns, but a Vaculik takedown, a hard right hand and some good defense on the ground made it another close frame.

Vaculik opened the third with a takedown, which was answered by Martinez as soon as the two returned to the feet. And from there, it was all Martinez, whose top control allowed him to pull away and seal the victory.