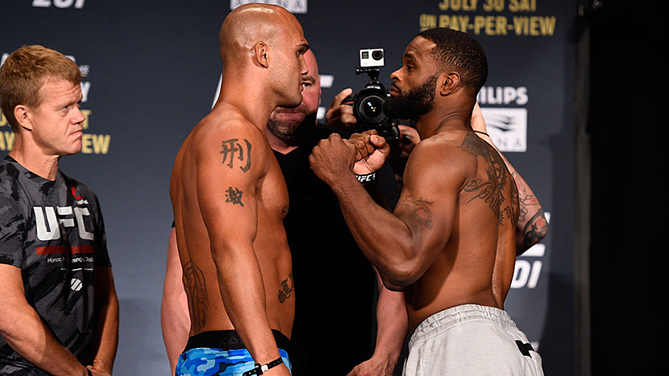 All eyes inside Philips Arena will be on the Octagon this Saturday night when Bruce Buffer introduces the headliners for UFC 201: Welterweight champion “Ruthless” Robbie Lawler and No. 1 contender “The Chosen One” Tyron Woodley.

Well, except for American Top Team patriarch Dan Lambert. He’ll admittedly be sitting in the corner of one of their locker rooms, watching it on TV.

The co-founder of the venerable ATT definitely finds himself in an awkward position as his prized pupils do battle — the man to bring home to Coconut Creek the first championship belt since the gym’s founding in 2001 in Lawler, who joined the team in 2012, and a guy who started with the squad back when he was an amateur and blossomed into a top contender in Woodley.

“I thought it’d be a great thing,” Lambert said on the eve of the fight. “I asked Dana (White) for the fight originally because I’m thinking ‘Robbie is going to have to fight a stud anyway as a champ, so he may as well have that stud be one of our guys.’ It’s a win-win I thought. But right after it got announced it sunk in, ‘Oh (expletive), this isn’t such a good thing.’ It’s just awkward, really awkward.

“But it’s a good problem to have. It says something about the coaches, the team, and the fighters when you got a guy who’s the champion and a guy who’s challenging for the title in the same division – I guess that’s good.”

Both fighters have made it a mission not to let the fact that they wear ATT patches become a storyline, since the champion trains in the main Florida campus while Woodley is based out of a satellite camp he started near his St. Louis home. They’re stressing that they’ve only trained and sparred against each other a handful of times in their careers. But don’t be fooled: the emotions are there, as Woodley let slip during a recent conference call to promote the fight:

“I started out as an amateur with American Top Team,” Woodley said. “I was a coach for four of the top five or so of the American Top Teams. I was a bag of bones, (expletive) getting thrown around, sparring two times a day and that was my role at that position. I was just a sparring partner. Then I progressed to the position where I’m at right now and I’m on the American Top Team. And I put my own fight money, my own money behind the name and the brand. But I feel like I am American Top Team. And I encompass everything that it stands for. (Lawler’s) concept is that you should be there, down there, live there, train there and he’s allowed his own opinion of it, and no, I did not take it personal.”

Lambert understands the tampering of the storyline, but that doesn’t change the emotion behind the fight.

“You have to look at it against the backdrop of this is not the Williams’ sisters playing against each other in the Wimbledon finals, where they are going to hit the ball over the net a couple of times and then one is going to win a million bucks for winning the tournament and one is going to win $500,000 for coming in second, then they are going to go home and the next tournament none the different,” Lambert said. “(Robbie and Tyron) are going to go in there and try to inflict damage on each other and one guy is going to be the champ and have all the opportunities that go with being the champion and the other guy has to go right back in line. These guys have to look at this as an individual thing, not a team thing.

But how will the fight itself go down? Few have an inside perspective like Lambert.

“T-Wood is going to be the better offensive wrestler; he’s probably a better control grappler, and I think he’s the strongest and most explosive guy in the division,” Lambert said. “Robbie’s got more championship round experience, he’s a zombie that gets stronger as the fight goes, he has a punching power edge over anybody he’s going to fight - maybe in several different divisions - but that may be somewhat nullified by the fact that it’s four-ounce gloves and both guys have knockout power. Robbie’s biggest advantage he has is that if this turns into a war and it goes into later rounds, for a lack of a better term description, nobody is going to out-nutsack that guy.”

“We’ll see which (scenario) plays out.”

The world gets to see for sure on Saturday night at UFC 201. Dan Lambert may be hiding in the corner of a locker room waiting to find out the result.