With the recent signing of former WWE star CM Punk, here's a special collection of Pro-wrestlers in MMA. Watch on 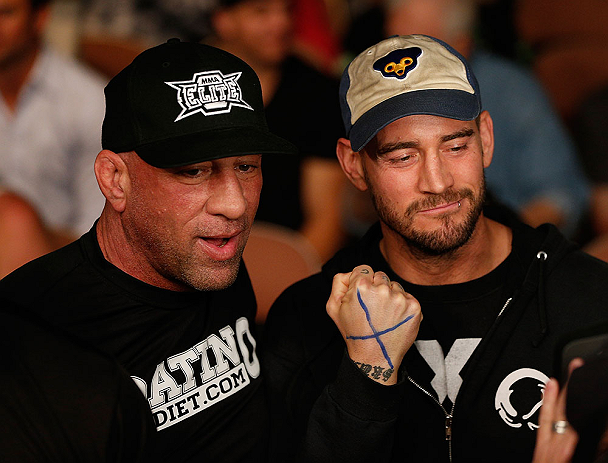 When it comes to breaking the internet, Phil Brooks gave Kim Kardashian a run for her money, and he didn’t even have to take his clothes off.

Not that Brooks, better known to the world as former WWE superstar CM Punk, is going to know that, considering that he’s steering clear from social media for the moment.

“I’m staying away from the negativity for now,” Brooks laughed as he met the media shortly after UFC 181, a couple hours removed from the announcement that he will make his mixed martial arts debut in the UFC sometime in 2015.

And there has been, and will be, negativity, not just from fans wondering how a former pro wrestler will compete in the biggest MMA promotion in the world, but from the media and current fighters who see Brooks’ arrival as nothing more than a publicity stunt. Brooks was well aware of all of that before Twitter got a hold of the news, but it’s safe to say that years under the glare of the WWE spotlight has earned him some thicker skin than most, so he was unwavering in his desire to make the leap into MMA at its highest level.

Brooks isn’t the first pro wrestler to reside on the UFC roster, with Brock Lesnar and Ken Shamrock being the obvious first names to come to mind. When it comes to Brooks’ signing, Lesnar, in particular, has been brought up the most, considering that the two were colleagues in the WWE and that Lesnar, with just one pro fight, entered the UFC in 2008. Two fights later, he was holding UFC gold.

“Brock was the heavyweight champion,” Brooks said. “So if somebody’s going to compare me to Brock Lesnar, I’ll take that.”

Expected to fight at 185 pounds, but not ruling out a drop to welterweight from his current weight of 200 pounds, the 36-year-old Brooks is in a different situation than Lesnar though. The big man from Minnesota was a former NCAA national champ with a collegiate wrestling background, and he was 30 at the time of his Octagon debut, giving him a few years on the 36-year-old Brooks.

But again, Brooks – who has a background in karate and has been training jiu-jitsu with Rener Gracie in California – knows what he’s up against, and he’s still moving forward with what he calls “the biggest challenge I’ve ever put in front of me,” saying “My plan is to go full-tilt, and kick my own ass so I don’t get my ass kicked when I step into the Octagon.”

It’s an uphill climb for sure, but there are a couple things at play here that aren’t receiving enough attention. The first is that when it comes to the mental game, Chicago’s Brooks may have an edge on most. A lot of his success in the WWE came down to determination and pure stubbornness. He wasn’t physically imposing at 6-2, 218 pounds, at least not compared to larger than life figures like Lesnar, The Rock, or The Undertaker, but he still soared to the top of the sports entertainment business and competed with bigger and stronger athletes hundreds of nights a year. Yes, I am well aware that pro wrestling has pre-determined outcomes and is sports entertainment, but there’s no doubting that those in that business are athletes, and Brooks’ rise there is notable for the way he did it.

Of course, having no significant competition background in boxing, wrestling, kickboxing, jiu-jitsu, etc., is a red flag, but Brooks will not only have access to the elite in the sport when it comes to training should he so desire, but making a debut in the UFC in 2015 doesn’t mean next month. It could be six months from now, it could be a year, and you can be assured that Brooks won’t step into the Octagon until he’s ready and the UFC thinks he’s ready.

“I’m coming into the biggest fighting organization in the world with an 0-0 record and I understand that,” Brooks said. “I’m sure people are still going to throw that in my face, but that does not bother me. That’s the reality of it, and I embrace that reality. Can CM Punk fight? Yeah, I think everybody, on some level, can fight. It’s on our DNA. I intend to take this seriously, and I respect everybody who’s ever set foot in the cage, and before I’m done here, everybody will respect me as well.”

Bold words, but without a punch being thrown, you have to respect Brooks for saying them because he’s taking a step most wouldn’t dare to take. Yes, he will get a lot of attention for this (he already has) and he will make good money in the process, but if rumors are true, Brooks already has money from his WWE days, so why take the risk?

“I’m not going to try and give you some inspirational message,” he said. “I know there are a lot of kids out there that look up to me, and I always just tell them to not let anybody tell you that you can’t do something. If you want to do something, as long as it doesn’t harm anybody else, do it. Choose a path and work towards it to the best of your ability. And that’s all I’m doing here. I’m 36 years young. I haven’t felt this good. I’m gonna give it a hundred percent and I just don’t let anybody tell me that I can’t do something, because I believe in myself and I know I can.”

On October 26, the day of his 36th birthday, Brooks settled whatever issues he had with the WWE and was free of a non-compete clause, allowing him to sign with the UFC. He spoke to his wife, WWE wrestler AJ Lee, and while he admits she’s “not thrilled” about him fighting for real, “she’s okay with it, and she’s got my back a hundred percent, and that means the world to me.”

Meetings with the UFC brass followed, and Saturday night it became official that the man known as CM Punk was a UFC fighter. It’s a huge leap to make for Phil Brooks, and he knows it, but for all the folks complaining about his arrival, it pays to think about a couple of things: No one’s going to fight for him; Every day in the gym he’s likely going to have someone gunning for him, hoping to take out former pro wrestler CM Punk; And when he gets to the point where he enters the Octagon, the man he’s fighting will have every chance to prove that he doesn’t belong there. But then again, Brooks has every chance to prove that he does. That’s what fighting is about. And who wouldn’t want to see that?

“It isn’t so much about UFC,” he said. “It’s about me and what I know I have inside of me, and what I want to prove, not only to the world, but more importantly to myself. This is something I’ve thought about for a very long time and haven’t been able to do. So once the opportunity presented itself, I would have been a fool to say no.”