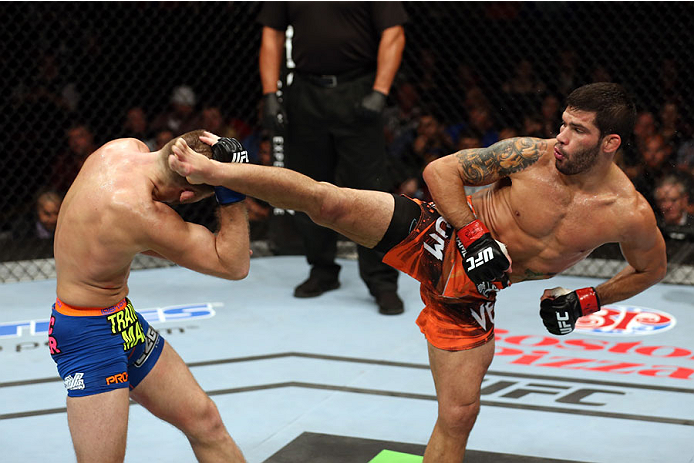 Prior to last Sunday evening, Raphael Assuncao had been the last fighter to defeat TJ Dillashaw and if not for an injury, he would have been the one sharing the cage with Renan Barao at UFC 173. Instead, while the Brazilian was recovering, the unsung challenger stepped into the Octagon, turned the division on its head and walked out with the title around his waist.

Assuncao returned to action five months after Dillashaw won the title, but spent the remainder of the California native’s reign on the sidelines. He lost the entire 2015 fight campaign as a result of a persistent ankle injury that ultimately required surgery and has been in the background of the deepening division over the last 12 months as a result.

But on the brink of booking his return to the Octagon and having just enjoyed a front row seat in Boston to witness Dominick Cruz’s triumphant return to the bantamweight throne, the Atlanta-based contender wants to make sure his thoughts on where the 135-pound ranks should go from here are on the record.

“I thought maybe Dillashaw had a slight advantage, other than the takedowns, but it was a pretty close fight,” he said of last Sunday’s championship tilt that saw Cruz edge out Dillashaw by split decision to reclaim the title he lost due to injuries, not by being defeated in the Octagon. “It was a close fight; both guys were very high level, but I thought TJ had a slight advantage.”

With the championship fight in the books, the focus within the division has shifted to figuring out what comes next for the fighters in the top tier of the 135-pound ranks, a group that very much includes Assuncao.

Following his win over Frankie Saenz at UFC 194 in December, Urijah Faber began campaigning for the opportunity to face the winner of last weekend’s championship clash, building his case around the rivalry and tense relationship he has with each competitor. With Cruz emerging victorious, “The California Kid” has continued to lobby, hoping to finally face the once and current king in the conclusion of their trilogy, a fight that was supposed to take place all the way back at UFC 148.

“Why does Urijah just get the next title shot?” Assuncao questioned. “With the fight being so close and Urijah having had a couple title shots already and having fought Cruz already maybe I’m wrong and maybe the fans do want to see it, but in my mind, I don’t think it’s a great fight for Urijah.

“What makes sense right now is maybe a rematch between (Cruz and Dillashaw) and me fighting Urijah. That’s where I see the division right now.”

The two contenders have a history, with Faber having earned a third-round submission victory when the two shared the cage six years ago at WEC 46 while both were still competing in the featherweight division. But a lot has changed since then.

Assuncao is a perfect 7-0 since joining the bantamweight ranks, adding victories over Pedro Munhoz and Bryan Caraway to his resume following his win over Dillashaw before being forced to the sidelines. Despite being out of action for the last 15 months, his winning streak is still the longest of anyone in the division beside Cruz and, as far as he’s concerned, that has to count for something.

“I just think Urijah getting the next title shot doesn’t really make any sense right now. I’m right there – I’m one of the best in the world, with a seven-fight win streak. I don’t care that they’re not all finishes; look at the quality of opponents.

“I think it makes a lot of sense for Urijah and I to have a rematch. He’s coming off a win and I’ve got my winning streak,” the soon-to-return contender continued. “He’s one of the best in the world still, he’s right above me (in the rankings); I think it makes sense for us to fight and see what happens afterward.”

With the smoke having barely cleared from last weekend’s championship tilt, Assuncao is giving the UFC matchmakers a little time to get back to the office, sit down and start formulating their ideas for how to proceed as the second reign of “The Dominator” commences. But he won’t be waiting too long.

“I’ll talk to the UFC guys this weekend and see what they have in store for me. If I don’t hear anything as far as the Urijah fight, I would probably just fight in March or April. There are a couple Top-10 guys out there that probably could be a good comeback fight, but I don’t want to mention anybody.”

But if you think for a minute that all this talk about Faber means Assuncao isn’t interested in jumping into the cage and being the first to challenge Cruz for the title, you’d be sorely mistaken.

“Of course I would be ready to do that,” he laughed, as if the question didn’t even need to be asked. “Cruz just proved that there is no ring rust here and I feel great; I wrestled yesterday with my brother. Obviously, I have to get my timing (down), but I’d be so ready if I was to challenge for the belt.

“I’ll give it a couple weeks – see what the status is of the title fight, how Cruz is doing, see what’s the deal with Urijah. If I don’t get a title shot or to fight Urijah, I’ll fight somebody else (in the Top 10) and I’ll stay humble.

Regardless of what comes next, Assuncao’s message to the division is the same.

“Whatever the UFC decides is best. Everybody knows – ‘The Little Guy’ is coming.”