“Life is full of challenges and I don’t want this to be one of my greatest frustrations. It is what it is and if I keep working hard, I think one day it’s going to happen. I just have to stay focused and stay positive on the next task.”
By E. Spencer Kyte • Aug. 12, 2019

It was a tough call for Raphael Assuncao to make.

After amassing an 11-1 record at bantamweight that included wins over TJ Dillashaw, Pedro Munhoz, Bryan Caraway, Aljamain Sterling, Marlon Moraes and Rob Font, amongst others, should he wait for a shot at the belt or take a February rematch with Moraes?

He took the fight.

“I should have sat and waited,” Assuncao said, reflecting on the rematch, which ended with him getting submitted in the first round. “I’m not scared of the guy — I fought the guy and beat the guy previously — and my coaches were all on the same page like, ‘Don’t fight right now. You already did it. Sit and wait; see what happens.’

“I didn’t listen to them. I took the fight, negotiated the contract and lost the rematch.”

Not only did he lose the fight, but it very well could have cost him a shot at the bantamweight title.

Six weeks after his main event rematch with Moraes, Dillashaw relinquished the bantamweight title before being hit with a two-year suspension following a positive test for recombinant human erythropoietin, commonly referred to as EPO. In the wake of the controversy, a bout for the vacant bantamweight strap was cobbled together, with flyweight kingpin Henry Cejudo moving up to challenge Moraes. 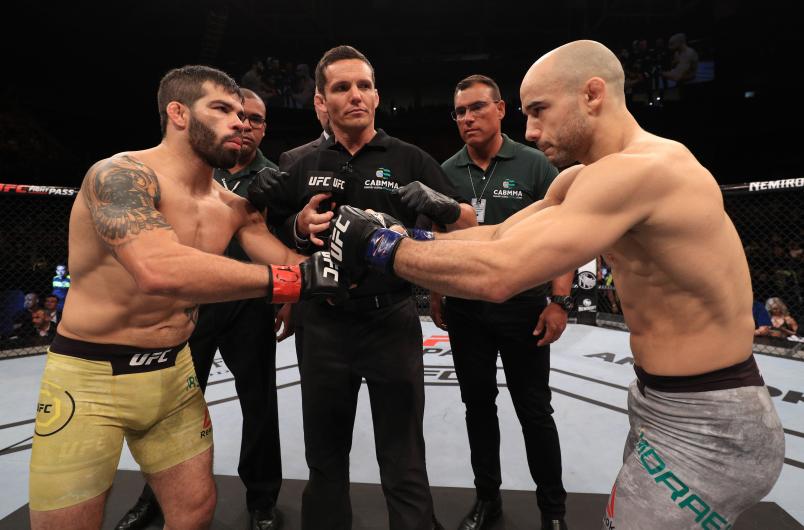 FORTALEZA, BRAZIL - FEBRUARY 02: (L-R) Opponents Raphael Assuncao of Brazil and Marlon Moraes of Brazil face off prior to their bantamweight fight during the UFC Fight Night event at CFO Centro de Formacao Olimpica on February 2, 2019 in Fortaleza, Brazil

While there are no guarantees that Assuncao would have been picked had the rematch never taken place, losing to Moraes in February ensured that he wasn’t in consideration for the June championship clash.

“Despite those factors and those facts, I feel pretty good,” he said, reflecting on the impressive career with unfortunate timing he’s crafted since moving to bantamweight following a first-round knockout loss in his UFC debut. “I don’t want to let the frustration settle within me.

“Life is full of challenges and I don’t want this to be one of my greatest frustrations. It is what it is and if I keep working hard, I think one day it’s going to happen. I just have to stay focused and stay positive on the next task.”

But that doesn’t mean he rushed right out and started scouring the rankings, looking for another fight either.

The last five-plus years have Assuncao compete exclusively against opponents stationed in the Top 15, putting together a 7-2 record while also missing an extended stretch of time due to a nasty ankle injury that kept him out of the Octagon from the night he beat Caraway in Halifax, Nova Scotia in the fall of 2014 until he dropped a rematch with Dillashaw at UFC 200 in July 2016.

That kind of schedule and the frustrating realities of being so close without getting the chance to challenge for championship gold can dampen the spirits of even the most ardent optimist, so Assuncao took three months off.

He raced some cars and spent time at home with his family, allowing himself to recharge mentally and recover physically from the rigors of a fighting career that spans nearly 15 years and includes early lightweight wins over Jorge Masvidal and Joe Lauzon and a 27-6 record overall.

“I kind of gave myself some time and let the hunger come again,” he explained. “It wasn’t like I was depressed or anything; it was just time for myself, time that I needed.”

In late May, Assuncao was paired off with rising star Cory Sandhagen in a bout that lands on the preliminary card portion of this weekend’s massive UFC 241 fight card at Honda Center in Anaheim, California.

Just as he’s done for the last five years, it’s another tough matchup against a top contender, as the Elevation Fight Team member is a perfect 4-0 inside the Octagon, most recently coming out on the positive side of a split decision verdict against heavy hitter John Lineker at the end of April.

“He’s a good opponent,” Assuncao said Sandhagen, who carries an 11-1 record overall into their clash this weekend. “He’s a good fighter — a high-level guy and he brings the fight I don’t have anything to say about my opponent because I’m training for the best guy, as I always have, and we’ll see what happens come fight night.”

Assuncao has never been one to say too much before or after his fights, preferring instead to keep a low profile and let his performance speak for him. This time around, that has included saying very little about a major change in terms of his preparation for his return on Saturday.

“I love playing the game where I’m the quiet, secret guy that’s ‘not talking too much,’” said Assuncao, who did his full eight-week training camp at American Top Team, leaving the comforts of home in suburban Atlanta for the confines of the dorms at the South Florida fighter factory. “I don’t want to throw too much out there because I like secrets. I don’t post a lot and I kind of like that atmosphere. Instead of being out there (talking all about it), I like keeping that energy inside.

“I had a little bit of the comfort zone lifestyle for a while, even for my last fight, and I just needed a change. I made the change with an intelligent perspective.

“The changes I’ve made haven’t been drastic — I’ve still kept same characteristics of who I am and just added to who I am, to my game, to my techniques,” he added. “I’m just adding stuff — training, training partners. It wasn’t like, ‘Everything got destroyed; let’s rebuild the whole thing.’ Everything was still intact; we’re just adding pieces.”

While he’s enjoyed a tremendous amount of success training at home in Alpharetta, Georgia alongside his brothers, Freddy and Junior, and a handful of additional high-level talents, the combination of having new coaches watching him prepare and working in a room filled with elite competitors was too good to pass up.

And on the eve of UFC 241 Fight Week, Assuncao is ready to step back into the Octagon, handle his business and get right back into the thick of the bantamweight title chase this weekend.

“With a good win on Saturday, I expect to be right back in contention; right back where I was,” he said. “That’s the ultimate goal. I know every single fighter on the roster has that same goal and we’re all chasing the same bird — everyone has their own shotgun, but there is just one bird — and that’s still my goal. That’s all I have in mind right now.

“I’m still the same guy,” he added. “I know who I am as a person. I haven’t changed too much. I’m not going to go out there and curse, call peoples’ mom’s names and try to get a title shot; it’s not going to happen. I’m going to keep focused on the task and I think with a good win, I’m going to be right back where I left off.

“We’ll see what happens. Hopefully I’ll get my chance.”